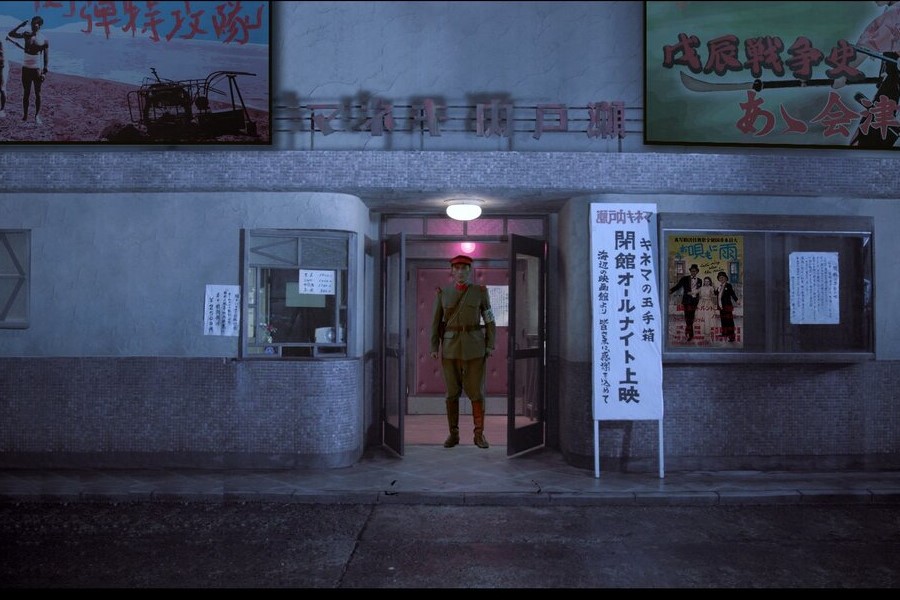 An image from Nobuhiko Ôbayashi's final film, Labyrinth of Cinema

By this point we know what to expect from a film festival in 2020: virtual screenings, Q&As conducted over Zoom or an equivalent videoconferencing platform, and extended viewing windows that take some of the urgency out of catching a given film – though that also allows us to watch a movie when we can give it our full attention.

And quite a bit of the 2020 Reel Asian program is worthy of such focus, as you’re about to see.

The Greatest Country In The World

Quebec, the day after tomorrow: A radical-right party has taken power and is not-too-subtly doing its best to remake the province in its own intolerant image. When a Haitian housekeeper vanishes, leaving her employer (Mickaël Gouin) – a white Montrealer – to take care of her young son, he reaches out to a Vietnamese depanneur owner (Nguyên Thành Trinh) for help finding her. Winner of the audience choice award at Reelworld just last month, it’s a moody, quietly despairing drama that creates a distressingly convincing alternate reality in which to set its mystery narrative.

The Horse Thieves: Roads Of Time

Billed as an “Asian Western,” this collaboration between Kazakh director Nurmukhambetov and Japanese filmmaker Takeba is a lean, visually striking meditation on primal themes, concerned entirely with matters of life and death, parents and children, crime and punishment. It’s simplistic in theme but expansive in its imagery, using sweeping vistas to frame the very personal losses experienced by a woman (Samal Yeslyamova) and her young son (Madi Minaidarov) – and the path to retribution offered by an old friend (Mirai Moriyama). It’s perfect festival viewing, its exoticism hiding a story that’s almost comfortingly familiar – but the execution is on point, making the most out of every one of its long, thoughtful silences.

Available to stream November 12-19; includes a conversation with the filmmakers

Ôbayashi – who died earlier this spring after a long and prolific career – was best known to Western audiences for his unquantifiable cult 70s horror movie Hausu, which was rediscovered on the midnight-movie circuit about a decade ago. His final film is similarly amorphous, a three-hour fantasy about three friends (Yoshiko Hosoda, Takahito Hosoyamada, Takuro Atsuki) sucked through a picture-house screen and into a series of Japanese war movies. An exuberant filmmaker even when working with the bleakest subject matter, Ôbayashi takes evident pleasure in re-creating the textures of classic cinema – both grainy black-and-white and super-saturated colour – while never blunting the impact of the stories those movies are telling. It’s a hell of a swan song.

Fresh from the London Film Festival, Bassam Tariq’s taut character study casts Riz Ahmed as a British-Pakistani rapper called Zed whose meteoric rise is abruptly stopped by an autoimmune condition; with no prospects, Zed has to move back home to London and seek treatment over the objections of his conservative father (Alyy Khan), who doesn’t trust doctors. It seemed strange that Ahmed should follow last year’s riveting Sound Of Metal with another movie in which he plays a performer derailed by sudden illness, but there’s room for this one: Mogul Mowgli is a very different animal, set in a different world, and its star is, if nothing else, a very resourceful chameleon.

Reel Asian has hosted staged readings before – most recently a live reading of Yung Chang’s unproduced screenplay Eggplant – but 2020 makes everything different. The screenplay being performed as this year’s closing-night event has already been shot; writer/directors Shasa Nakhai and Rich Williamson filmed their adaptation of Catherine Hernandez’s novel Scarborough during the pandemic, and it’ll be released in 2021. Think of this as a DIY sneak preview: members of the film’s cast will perform scenes from the screenplay, followed by an artists’ talk with Hernandez, Nakhai and Williamson about bringing the book to the screen.