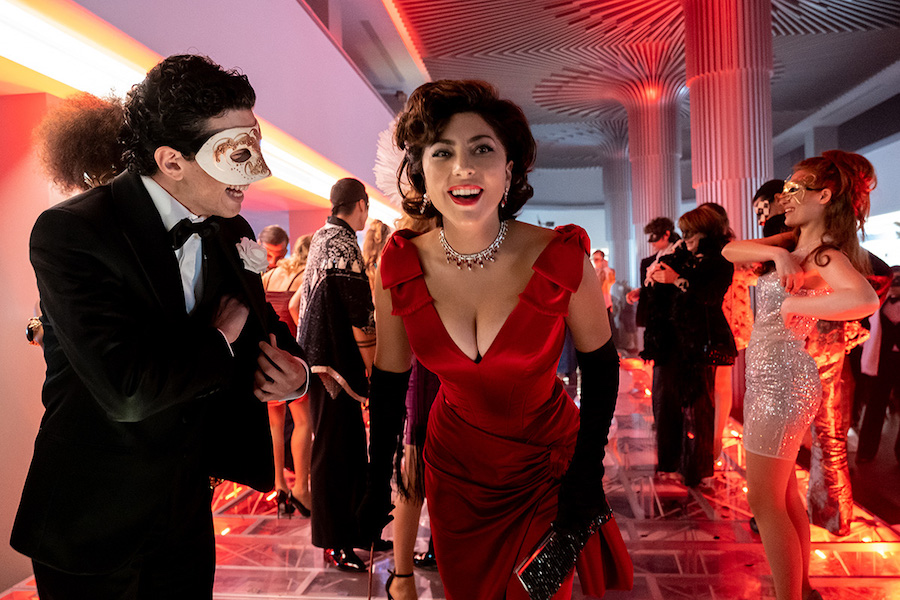 Four years after dramatizing the Getty kidnapping in All The Money In The World, producer/director Scott tackles another lavishly produced, utterly detached study of privileged people forced to confront their own vulnerability. This time, it’s the Gucci clan, who lost control of their fashion empire through a decade of infighting between cousins Maurizio (Adam Driver) and Paolo (Jared Leto), sons of founding brothers Rodolfo (Jeremy Irons) and Aldo (Al Pacino). Some will insist producer/director Scott meant for House Of Gucci to turn out this way – that its collision of mismatched molto Italiano performances is intended to pitch the film into some operatic stratosphere, with Driver’s restrained, almost charmingly awkward turn as Maurizio somehow supposed to contrast the cartoonishness of Lady Gaga as Maurizio’s scheming wife Patrizia and whatever the hell Leto’s doing as the oafish gargoyle Paolo. But that would require the film to have a perspective it simply does not possess. Scott’s just ticking off grievances both personal and professional while his actors go through their costume changes, reducing a family tragedy to a hollow fashion show on a series of expensive sets. 157 min. Some subtitles. Now playing in theatres. NN (Norman Wilner)

If ever a movie deserved the description “layered,” it’s this film adaptation of a Haruki Murakami short story. Years after a sudden tragedy, revered Tokyo theatre-maker Yûsuke (Hidetoshi Nishijima) takes a job in Hiroshima directing a multilingual production of Checkov’s Uncle Vanya. The company pairs him with a no-nonsense chauffeur named Misaki (Tôko Miura), literally and metaphorically turning the poker-faced director into a passenger for, we gather, the first time in a long time. All the ingredients that made Hamaguchi’s 2015 breakthrough Happy Hour such a beautifully affirming experience are here, but sharpened ever so delicately into a story that parallels personal growth with the acting process.

Early on we get some seriously verbose Murakami-esque sex scenes, one of several repetitious devices that help Drive My Car coalesce toward its satisfying emotional climax. There are plenty of juicy plot twists and revelations, but time is a big theme in the filmmaker’s work and key dramatic moments unfold during long driving sequences. Hamaguchi’s eye for architecture, objects, light and spaces is both unassuming and absorbing – his framing often suggests how ineffable things can affect us unexpectedly yet tangibly. The way the movie incorporates the U.S. atomic bombing of Hiroshima into the narrative is also fascinating and surprising. 179 min. Subtitled. In theatres Friday. NNNN (Kevin Ritchie)

Documentarians Cohen and West (RBG, My Name Is Pauli Murray) tackle another cultural icon: Julia Child, who mastered the art of French cooking and became a television star in the early 60s by not only making complex cooking accessible to Americans, but by demonstrating that women could hold their own in a professional kitchen at a time when that simply wasn’t done. Child took a domestic task and made it a feminist act, which constituted a radical stance in the years before the women’s liberation movement. -Cohen and West clearly adore their subject, framing her as a tireless polymath and adoring partner to her husband Paul – while reframing the uncomfortable stories of Child’s homophobic behaviour as an opportunity for her to learn and apologize to the gay community. (She did do that, but she was apologizing for a lot more than what’s related here.) Julia the documentary makes the case that Child’s good works outweigh her personal blind spots, and when all the evidence is piled up it’s hard to argue otherwise. But the film’s own blind spot has a way of sticking in one’s throat. 95 min. Some subtitles. Now playing in theatres. NNNN (NW)

Stephen Karam adapts his own play about a New York family, haunted by personal demons and failures, who gathers for Thanksgiving dinner in a crumbling and cavernous Chinatown apartment. With the year’s fiercest ensemble including Richard Jenkins, Steven Yeun and stage star Jayne Houdyshell, Karam manages to defy our worst expectations. Stage-to-screen adaptations tend to feel boxed in or like “canned theatre,” to borrow a term as old as the film’s creaky and mildewed setting. But Karam’s play nimbly lends itself to movie language. The Humans is a haunted house story, where horror movie tropes from rattling furnaces to forceful shadows are expertly deployed to express the emotional terror and uncertainly living inside its characters. The film also stands out among the “elevated horror” titles that wear the boutique film label A24’s logo – think It Comes At Night and Hereditary. Where those movies felt like they were trying to earn artistic cred by saddling jump scares with family trauma, The Humans uses jump scares to serve its felt and considered family drama. 106 min. Now playing at the Fox Theatre and available to rent at Apple TV and digital TIFF Bell Lightbox. NNNN (Radheyan Simonpillai)

It’s been almost five years since Resident Evil: The Final Chapter, so naturally it’s time to start the franchise all over again, rolling back to the night of September 30, 1998, when a handful of ordinary heroes – including Claire Redfield (Kaya Scodelario), her brother Chris (Robbie Amell), Jill Valentine (Hannah John-Kamen) and Leon S. Kennedy (Avan Jogia) – must fight their way out of a town zombified by the sinister Umbrella Corporation. Writer/director Roberts, the British filmmaker who gave us the 47 Meters Down movies and The Strangers: Prey At Night, breaks with executive producer Paul W.S. Anderson’s earlier approach immediately, trading Anderson’s glossy digital aesthetic for something more akin to John Carpenter’s Prince Of Darkness, with a grimy mise-en-scene and shambling mutants massing at the gates of our heroes’ stronghold. Fans of the early Capcom games will enjoy seeing the locations brought to life, and fans of Toronto actors will enjoy seeing Pat Thornton turn up as a skeevy truck driver and Josh Cruddas as a frantic whistleblower. Seven movies in, that’s something. 107 min. Now playing in theatres. NNN (NW)

Joaquin Phoenix and Woody Norman squirrel their way to our emotions in C’mon C’mon.

In C’mon C’mon, a tender and thoughtful but ornamental drama, nuanced performances that worm their way into our emotions come gift-wrapped in black-and-white cinematography and other cinephile gimmicks that gesture towards something more. And some of those gestures, which position people of colour as props in a white family drama, can be discomforting and should not be so easily dismissed. Joaquin Phoenix plays Johnny, an uncle who steps up as pinch-hitter parent, trying to gently tap into his nephew Jesse’s wavelengths like someone carefully turning a rotary radio dial for a clear channel. This is a film that is about listening to people’s pain and needs, a point driven home by Johnny’s occupation: he makes radio documentaries. In between his one-one-one sessions with Jesse, Johnny travels to Detroit and New Orleans interviewing different Black, brown and otherwise marginalized kids about how they are coping with the various traumas in their lives. There’s a way to read this film as a plea for white parents to be sensitive and listen to what marginalized kids are feeling in the same way that they would their own. But that seems disingenuous when C’mon C’mon is only emotionally invested in Jesse. The other way to read this: C’mon C’mon uses marginalized kids to make a story about privileged white people and their problems seem urgent. Read a longer review here. 108 min. Now playing in theatres. NNN (RS)

Venom: Let There Be Carnage

The free, community-minded festival is staying online – mostly – for its 19th edition, with most of its programming available to stream from 6 pm tonight (Friday) through 11:59 pm Thursday. There’s also an outdoor screening of in-person shorts and video profiles at Daniels Spectrum Courtyard, Saturday from 5 pm to 8 pm.

This year’s offerings include a mix of recent festival favourites – including Tracey Deer’s Canadian Screen Award-winning debut Beans, Yasmine Mathurin’s moving documentary One Of Ours and Carlos Lopez Estrada’s charming Summertime – and a panel on how race-based data collection is affecting racial equity film and television (Monday, 4 pm) featuring filmmaker Amar Wala and analyst Nikitha Gopal, and moderated by NOW culture editor Radheyan Simonpillai. And if you’re looking for a bright, funny new sitcom set in London’s Muslim diaspora, check out the first three episodes of Nida Manzoor’s We Are Lady Parts and prepare to have your world rocked. Literally.

Disc Of The Week

The arrival of Peter Jackson’s The Beatles: Get Back on Disney+ this week – originally announced as a theatrical documentary about the making of Let It Be, and now a three-part, eight-hour miniseries – is the perfect window to look into the New Zealand filmmaker’s love of trilogies that get longer when you’re not looking. And this boxed set captures Jackson’s excessive tendencies in all their glory, gathering the six features the producer/director spun out of J.R.R. Tolkien’s The Lord Of The Rings and The Hobbit in both their theatrical and extended editions, on both 4K and Blu-ray discs. The trilogies were released in 4K last year around this time; the Blu-rays are newly remastered from those scans, and are considerably improved from the original high-def editions. This is definitely the best way to watch the films at home; even the more recent Hobbit films are improved by the HDR available on the 4K discs.

What makes it an Ultimate Collector’s Edition? The packaging, mostly: Warner has designed a handsome foldable case that allows you to stack or display your latest Precious in several different ways: you can let Martin Freeman’s Bilbo and Elijah Wood’s Frodo stand shoulder to shoulder across the decades, go for a collage that connects the two trilogies through Ian McKellen’s Gandalf, arrange it to display the spines of each film’s sleeve, or feature out an Elvish inscription that I certainly hope translates as “It seems weird to call this an Ultimate Collector’s Edition when it leave out so much of the exceptional supplemental material produced for the previous editions.” The extended Blu-rays for all six movies do include the commentary tracks – four apiece on each of the Lord Of The Rings films, and one filmmakers’ track on each of the Hobbit movies – but that’s pretty much it; the exhaustive behind-the-scenes docs and galleries included with the earlier editions didn’t make it into this set.

The UCE does offer a Blu-ray of new, exclusive extras, including three really entertaining cast reunions for the original trilogy – produced via Zoom for anniversary screenings at the Alamo Drafthouse, and hosted by Stephen Colbert – and the promotional reel New Line Cinema screened at the 2001 Cannes Film Festival, which is fascinating both for the way it doesn’t quite grasp the hand-crafted quality that made the trilogy so special, and for the reminder that Peter Jackson was once regarded as a guy who made some very messy horror movies and one art-house drama. The real question is whether the bonus disc and that nifty new box are worth the $300 or more you’ll have to pay. As impressive as the remastered Rings looks, that’s one hefty pricetag. (NW)