TV review: BH90210 is a satirical and soapy non-reboot 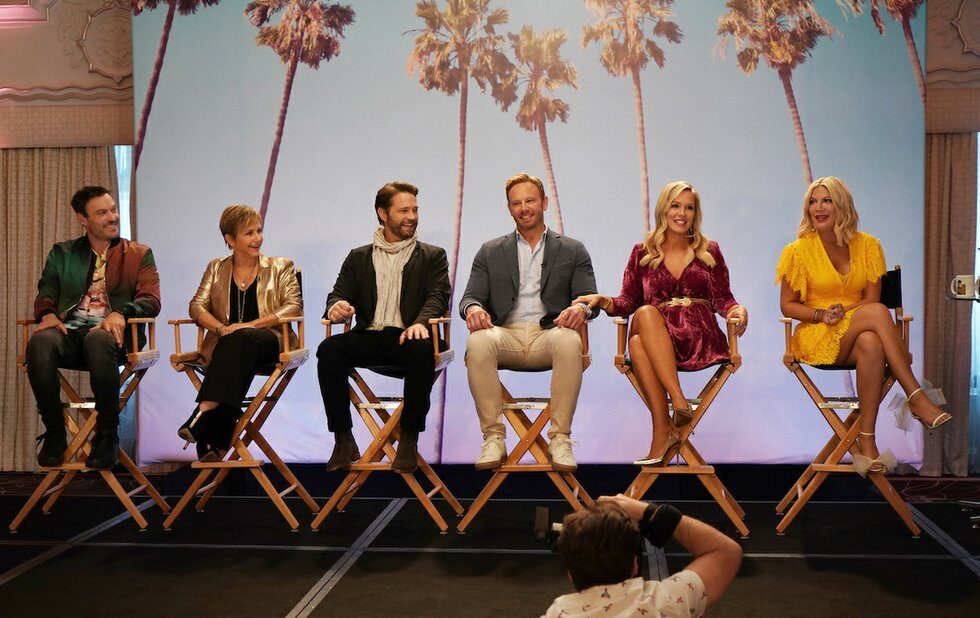 “Well, I can relax tonight! Beverly Hills, 90210 is on. It is seriously the hottest show in my peer group.”

I wrote that in my diary on September 26, 1991. I was in grade 9 and used phrases like “peer group,” so my initial lack of social success at my new high school seems less surprising now. Don’t get me wrong, I had friends. And all of my friends were faithfully watching Beverly Hills, 90210. Sometimes I would tie up the phone line for the full hour to be on the phone with a friend so we could “watch” it together. Even if it just meant listening to them breathe over the line until the commercial break. But needing them there in case Something Happened. And Something always Happened. At least once Aaron Spelling slowly ditched the Afterschool Special “Issue of the Week” episodes and started cranking out the soap. Beverly Hills, 90210 was always good, but then it got great.

We were the target demographic. Too old for kids’ shows, too young for prime-time soaps. There was nothing like it on television at the time, which is hard to believe for the following generations who took the likes of Gossip Girl, The O.C., One Tree Hill and Buffy The Vampire Slayer for granted. Beverly Hills, 90210 walked so they could run. Show some respect, people.

Beverly Hills, 90210 is not to be confused with the somewhat tepid reboot, 90210, that aired from 2008 to 2013. It brought back some of the original characters, but they were eventually Jim-and-Cindy-ed away into the background for the new teen cast (referring to the fate of the unfortunate parents of Brandon and Brenda Walsh, who in 1995 were unceremoniously shipped off to Hong Kong on a business trip from which they never returned so they were no longer able to buzzkill the now-college-aged cast’s good time).

So, I am now a middle-aged Gen-Xer who greeted the news of a “real” Beverly Hills, 90210 reboot – with the original cast (minus the late Luke Perry) – with curiosity. Cautiously optimistic would be too… optimistic for how I felt about it.

I then discovered that the cast was not reprising their iconic characters, but rather, playing heightened versions of themselves. Like the “Seinfeld reunion” on Curb Your Enthusiasm. Or The Monkees, the original “un-reality” show featuring characters who shared the names of the actors portraying them. It’s real but it’s fake. Is it meta? Is it satire? What is exactly happening?

It turns out that what is happening with BH90210 is… a lot. And if you weren’t a serious fan of the original show, there is a lot you are going to miss. The number of deep-cut references and referential jokes play out like an inside joke between the cast and viewers. The premise: the original cast travels to Las Vegas to sit on a convention panel celebrating the 30th anniversary of Beverly Hills, 90210. We get a glimpse of the individual (fictional) lives of each cast member – which sets the tone for the cluttered storylines to come.

Middle-aged, typecast and struggling to find their places in contemporary Hollywood, the actors are on edge from the start. The panel is a shit show (Shannen Doherty crashes via Instagram live-streaming, stealing all the thunder), the old friends get drunk, a caper ensues which results in a mass arrest that bumps up their social media capital and sets up the rest of the season: rebooting Beverly Hills, 90210. Except not really.

Did you get all that? Not a lot of people did. However, there is a great deal to enjoy about BH90210. Co-creators Jennie Garth and Tori Spelling have developed a Lucy/Ethel comedy dynamic over the years that shines through. Likewise, the chemistry between Spelling and former onscreen paramour Brian Austin Green and Garth and Jason Priestley proves to be timeless. The heightened “characters” play both with and against type, which further blurs the lines between fact and fiction. It’s all far more interesting to watch than what a re-tread of the original characters would be like: a concept that is lampooned in the opening dream sequence which brings the briefly in-character cast together at the Peach Pit.

But this is a large ensemble, they all have executive producer credits and they’re trying to give everyone an equal share of storyline, something that did not occur in the original show. In a single hour, four marriages come under threat, there is a bombshell pregnancy announcement, new grandmother Gabrielle Carteris may be struggling with her sexuality after a revealing fan encounter, Spelling (playing uncomfortably hard on her real-life public financial woes) is grasping at straws for a paycheque, there is a mysterious young man stalking the scene and Shannen Doherty hasn’t even entered the story yet!

The infamous Doherty receives only a sliver of screen time in the premiere, but her grand re-entrance is teased at for the next episode (also a cameo by former Walsh TV mom, Carol Potter). I stopped regularly watching the original show shortly after Doherty left and was replaced by Tiffani Thiessen, who was looking to shed her good-girl image from Saved By The Bell. I wasn’t interested. I’m #TeamBrenda for life.

BH90210 is trying to be many things. At times it serves up some poignant thoughts on aging in Hollywood, the pressure to be a “brand” and the cruel double standard in how the industry treats men vs. women. Sometimes it is borderline slapstick. And yet other times it falls back on its soapy laurels and serves up pure, fluffy drama. It is a juggling act that will either settle down over the course of the season or devolve into an even bigger hot mess.

And what about Luke Perry? Perry, who portrayed the beloved Dylan McKay, tragically passed away in March, leaving a gaping hole in this nearly perfect reunion of former castmates. His absence is keenly felt and acknowledged lovingly without becoming too maudlin. Additionally, the episode was dedicated to Perry after showing a short clip of one of Priestley and Perry’s early scenes together looking impossibly young and bright and full of promise.

If you caught references such as Spelling snapping, “You! Calendar Girl!” at Priestley, the significance of the Color Me Badd track in the dream sequence and what it means to “exchange an egg,” this show is for you. Too niche? Possibly. Destined to be the hottest show in my peer group? Probably not. Am I going to relax and keep watching? Absolutely.