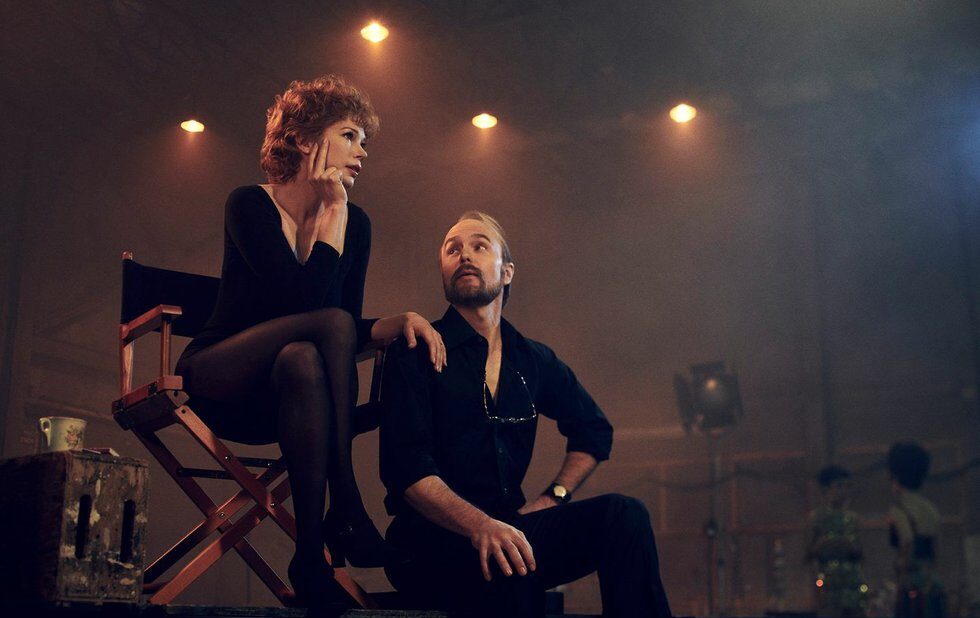 The series, executive produced by Lin-Manuel Miranda (Hamilton) and Steven Levenson (Dear Evan Hansen), among others, is loosely based on Sam Wasson’s 2013 biography of Fosse, the legendary director and choreographer of such hits as Chicago, Cabaret and All That Jazz.

Fosse (played by Sam Rockwell) met the flame-haired Verdon while choreographing Damn Yankees in the mid-1950s, and the scene in which Verdon privately auditions for him, flirting, dropping personal details about herself and partnering him on the dance floor, sizzles with sensuality and suggestion – both were attached to others at the time – and is easily one of the highlights of the five episodes available for review.

The series sets out to chronicle the pair’s symbiotic relationship. Married in 1960, the two made great art together, Fosse directing or choreographing her to three (of her four) Tony Awards, and Verdon lending her eye, style and editing skills – always uncredited – to his work on Sweet Charity and Cabaret. Even after they separated, they still collaborated.

It’s no surprise that the series’ best moments focus on production numbers. One episode hangs on the out-of-town tryouts for Damn Yankees, in which producers needed a crucial number and Fosse created the show-stopping Who’s Got The Pain in a few hours to save the day. Another episode contrasts Fosse’s meteoric achievements – in one season he won an Oscar, two Tonys and three Emmys – with rehearsals for a number from Pippin, a show about a lost man finding his way in life.

But without these intrinsically dramatic production numbers, the series falls flat, inserting things like images of Fosse popping pills or flashbacks to each artist’s childhood to fill in the gaps of the underwritten script. These scenes wouldn’t be so distracting if they had been directed with half as much verve as Fosse demonstrated when directing similar sequences in his own films – notably, All That Jazz.

And the constant use of titles to show us where we are, geographically and chronologically, in the couple’s lives, feels gimmicky.

Still, for theatre geeks, there’s lots to take in. Did you know that Verdon flew from Munich back to Manhattan to find the right ape costume for the If You Could See Her From My Eyes number in the Cabaret film? Or that Fosse talked his way out of a psychiatric institute by convincing the staff that when he had checked himself in it was just because he was doing research?

But the series’ wonky sense of chronology means emotional beats don’t land as they should. One episode uses the death of Gwen’s good friend Joan Simon (Aya Cash), wife of playwright Neil (Nate Corddry), to help the couple reflect on their own mortality. But there’s no arc to their friendship, so we don’t feel the full impact of Joan’s loss.

And Rockwell doesn’t add much to the series. Sure, he’s got the grizzled, comb-over look of Fosse’s middle-age right, but he lacks the man’s graceful carriage that you can see in YouTube clips or even photographs. His Fosse is persistent, but he lacks charm, making his legendary womanizing and powers of seduction – hard enough to watch in the post-#MeToo era – less convincing.

The series’ revelation is Williams, who starred in the 2014 revival of the Rob Marshall-choreographed Cabaret. Her Verdon, complete with signature quaver in her voice, is grounded, poised and completely believable, whether she’s delivering a star turn onstage or patiently trying to raise the couple’s child, Nicole (Blake Baumgartner), amidst the distractions and insecurities of showbiz.

Williams is electric in the production numbers, but it’s a testament to her acting ability that even in scenes that lack razzle dazzle she’s just as mesmerizing.