Review: Dave Chappelle special The Closer is a big f–k you

Money and power rule in Chappelle's controversial Netflix special The Closer, even at the expense of trans people's lives 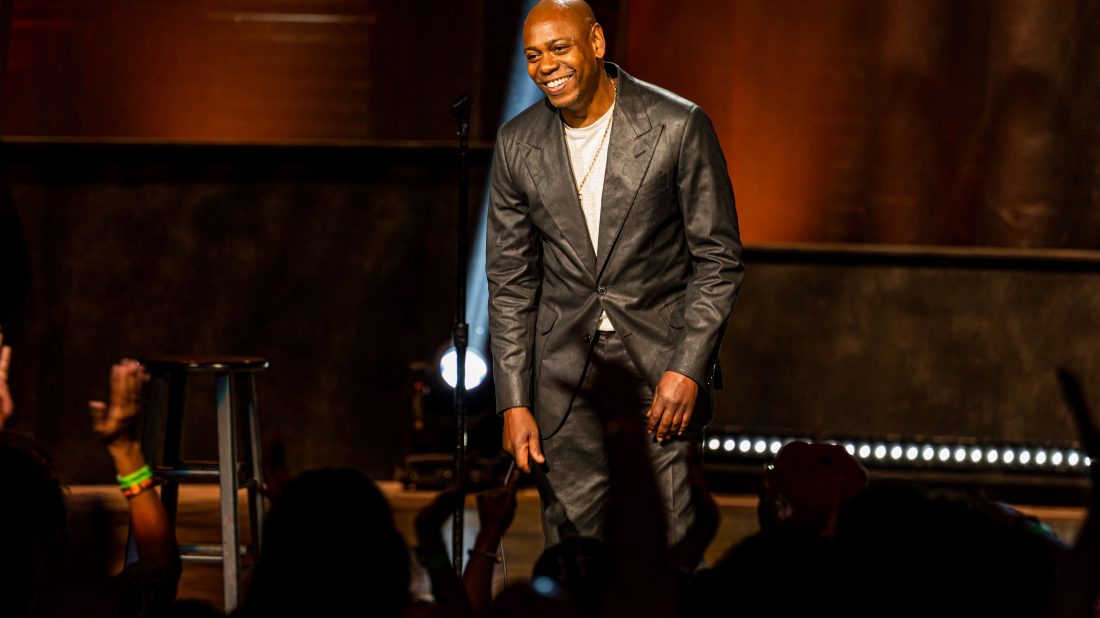 Dave Chappelle ends his Netflix special The Closer with Gloria Gaynor’s I Will Survive, which plays over a series of black and white photos of the comic hanging out with some of the world’s richest and most powerful people. People like Bill Murray, Kevin Hart, Jerry Seinfeld, Mick Jagger, Jennifer Lopez, Quincy Jones and… Netflix co-CEO Ted Sarandos, who late last week defended Chappelle’s special in a memo to Netflix staffers.

The choice of song is significant. Gaynor’s disco hit has become an anthem about LGBTQ+ pride and perseverance. By finishing his special with it, and demonstrating how powerful he is – a few minutes before, he calls himself the GOAT (Greatest Of All Time) – Chappelle is announcing he’s untouchable. And he’s rubbing this fact in the face of all his detractors.

Oddly enough, what went through my mind watching this was the scene from The Godfather II when Frankie Pentangeli is about to testify against Michael Corleone and, after he sees his brother from the old country brought into the court room by Michael’s thugs, changes his mind. Pentangeli realizes he’s powerless against this larger organization. If he talks, his family will die. He’ll shut up and then kill himself.

The message is clear. Anyone who has a problem with Chappelle’s special – whether it’s the transphobia, homophobia, misogyny or anti-Asian sentiment (there’s a coronavirus joke about Black people beating up Asians that nobody’s been talking about) – better back down. It’s a bullying tactic.

What’s gratifying is that clearly his detractors are not about to give in.

On October 20, a Netflix group for trans staffers is planning a walkout to protest the special and Sarandos’s defence of it. Artists who have benefitted from Netflix – including Dear White People’s co-show runner Jaclyn Moore and comedian Hannah Gadsby (Nanette) – have distanced themselves from the streamer and Sarandos.

As someone who’s covered comedy for more than two decades, I admire Chappelle’s craft. The way he constructs this special is worth studying – not because it’s especially funny (it’s not) but because he’s prepared the set like a debate team captain.

He uses every rhetorical trick in the book to try to prove he’s innocent of all the charges levelled at him.

He says early on that he likes the gays, but he prefers the Stonewall gays, the glory hole gays (insert decent Martin Luther King joke defending glory holes). He says the newer gays are “too sensitive.”

He tells us the Webster’s dictionary definition of “feminist,” concluding that he’s one because all along he thought it meant “frumpy dyke.”

Then he tells us he supported the #MeToo movement, even though he thought the way the victims of the movement handled their situation was “too white.”

All of which leads to his main point about the idea of “What is a woman?” which in turn gets him to call himself a TERF (trans-exclusionary radical feminist). He ends with an extended story about his friendship with a trans comic named Daphne, which is basically a riff on the “Some of my best friends are…” defence. Except this story has a tragic ending.

He complains several times that his detractors say he’s “punching down” in his LGBTQ material. Just because he complains about it doesn’t mean it’s not true – how else to explain his so-low-it-wouldn’t-even-work-on-amateur-night joke about that acronym – “LGBTQ…LMNOP…”?

Throughout the act, whenever a joke gets one of those I-can’t-believe-he-went-there laughs, Chapelle will say something like “It’s gonna get worse – hang in there,” or “I’m going all the way” or “Oh buddy, I’m in trouble now.”

What’s frustrating about Chappelle’s special is that there are bits of shrewd, intelligent observations in the act. He says that Black people are jealous of the LGBTQ+ community.

“Look how well that movement is doing,” he says. “How the fuck are you making that kind of progress? If slaves had baby oil and booty shorts, we may have been freer earlier.”

Elsewhere, he points out the racism in the early feminist movement.

But then he ruins it all by saying something nonsensical like: “In our country you can shoot and kill a [N-word], but you better not hurt a gay person’s feelings.”

Does he really believe this? Hateful comments do more than hurt feelings; they can also depersonalize people and in so doing incite murder.

Speaking of murder, Chappelle says, “these transgenders want me dead.”

When trans Netflix employee Terra Field’s Twitter thread about the special went viral, it was remarkable because she didn’t sound off about being offended herself. Instead, Field listed more than two dozen Black, Indigenous and POC trans people who have been killed, after each instance writing that that person was not offended.

Field’s point was clear: they’re not offended, because they’re dead and can’t speak for themselves.

Chappelle reaches tens of millions of people. He’s rich and famous, as he shows us at the end of the special with the A-list stars. He doesn’t need to pick a fight with a community that doesn’t have the same platform. But clearly his pride has been wounded.

Unlike someone like Eddie Murphy, who years after his homophobic specials like Delirious and Raw apologized for that material, Chappelle is like a spoilt kid who knows he’s done something wrong and insists he hasn’t. And his parents – in this case Netflix – are defending him.

Money talks, and Chappelle earns Netflix a lot of money. Even if it comes at the cost of trans people’s lives.