10 movies to take your mind off the U.S. election

These films will help both optimists and pessimists pass the time 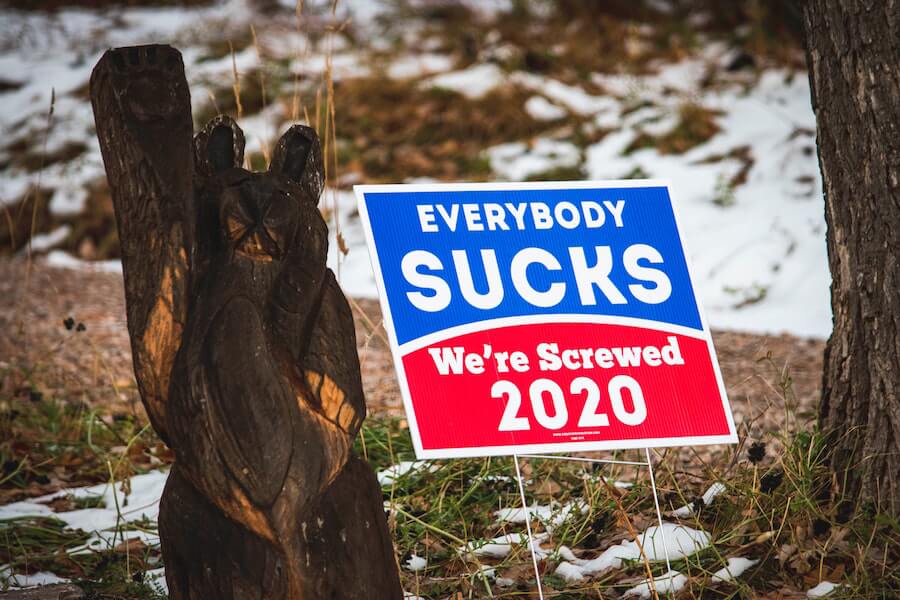 You can be forgiven for not wanting to think about the U.S. election. We’ve spent most of this year – which, in COVID time, works out to about 40 years – being inundated with messages about how November 3, 2020 is the last chance of stopping America from sliding into fascism under four more years of Donald Trump. And while that’s true I can’t imagine there’s anyone left who doesn’t understand that at this point.

Also, the unique nature of this particular U.S. election means it’ll be very difficult for a winner to be declared on the day, barring a landslide victory for one candidate or the other. So while you might want to stay glued to Twitter all night, it’s probably not the healthiest idea.

Take a couple of hours off. Watch a movie. I’ve compiled a list of recommendations for optimists and pessimists alike. If you want to immerse yourself in decency and compassion, I found a few lovely choices, and if you’d rather spend U.S. Election Night seething about rigged systems and a country unworthy of redemption, you can do that too. I even threw in a couple of double features.

I’ve been on a bit of an Audrey Hepburn run recently, thanks to Paramount’s new restoration of her breakout film Roman Holiday (reviewed here), and one of the greater pleasures has been rediscovering Stanley Donen’s Hitchcock-lite thriller, in which she plays a newly widowed woman trying to figure out who killed her husband, and what happened to the $250,000 fortune he’d been hiding. Cary Grant turns up as a charming older man, but really: Hepburn in Givenchy! Paris in the 60s! Walter Matthau being low-key terrific in the background! Honestly, if you’re looking for a glossy, weightless diversion, this is a fine one – and far less problematic than Breakfast At Tiffany’s.

Available to stream on Hoopla and Amazon Prime Video.

Everyone has their own specific definition of comfort food. Dean Parisot’s pitch-perfect send-up/embrace of Star Trek fandom sits near the top of my list, spinning a fantastic adventure out of the goofball idea of gullible aliens who can’t differentiate the cast of an old TV show from the characters they played, and recruit them to save them from a warrior race. It works as classic Trek, it works as a loving deconstruction of Gene Roddenberry’s blinkered futurism, it works as a character comedy – and every role is perfectly cast: Tim Allen is the self-absorbed Shatner stand-in, Tony Shalhoub, Sam Rockwell, Daryl Mitchell, Sigourney Weaver and Alan Rickman are his exasperated “crew,” Enrico Colantoni, Rainn Wilson and Missi Pyle play the starstruck Thermians and a young Justin Long pops up as an especially resourceful fanboy. This could have been a sour, cynical venture – and it likely would be today, in the age of toxic fandom – but instead it taps into something pure and wonderful. I watch it when I need to feel like a kid again, and also to watch Colantoni do that thing with his face that no one else can do.

Before he made the Oscar-winning Spotlight – which I’d also recommend if you’re looking for a movie where people band together to expose and exorcise a horrific evil – Tom McCarthy wrote and directed this tiny, perfect drama about a college professor (Richard Jenkins) who returns to his long-vacant Manhattan apartment to find an immigrant couple (Haaz Sleiman, Danai Gurira) living there. Not quite the white-saviour story you might expect, it’s a film about finding common ground in an America that – even in 2007 – is already becoming more polarized and insular. And it’s been under the radar long enough that now it feels like a lost classic – or a rallying cry.

Available for rental and purchase at Cineplex.

Paul King’s magnificent family films – adaptations of Michael Bond’s beloved books about a polite, innocent, only slightly calamity-prone bear who comes to live in London with the eccentric Brown family – replicate the warmth and open-heartedness of their source material so perfectly that they feel like they were wished into existence rather than produced with crews, actors and computer technicians. Time after time, the friendly little bear (voiced with perfect courtesy by Ben Whishaw) makes almost everyone he meets a better person – while still managing to wreak havoc on their businesses and homes. Maybe someone should introduce him to Boris Johnson.

If you want to spend two and a half hours watching capable, photogenic people put their differences aside to solve problems across hundreds of millions of miles, then Ridley Scott’s adaptation of Andy Weir’s ingenious sci-fi survival novel is a no-brainer. Matt Damon plays the eponymous astronaut, left behind on the red planet after an accident and forced to repair his tech, reach out to home and keep himself alive until his crew can return for him; he’s supported by a top-flight cast that includes Jessica Chastain, Donald Glover, Chiwetel Ejiofor, Benedict Wong, Aksel Hennie, Kate Mara, Kristen Wiig and Sean Bean (who gets the movie’s best joke), and all the conflict is situational rather than personality-based. And in 2020, it’s even more optimistic for its vision of a NASA that – one assumes – survived four years of neglect and disdain to get past that whole Space Force nonsense, rededicate itself to its mission and mount a Mars voyage, all while finally coming up with a PR strategy that works.

Available for rental and purchase on Apple TV and Google Play.

John Frankenheimer’s cracked masterpiece about a brainwashed veteran (Frank Sinatra) trying to stop an old war buddy (Laurence Harvey) and his mother (Angela Lansbury) from destroying the very fabric of American democracy still holds up more than a half a century later, thanks to Sinatra’s unmoored performance and Lionel Lindon’s stylized cinematography. But check out Jonathan Demme’s 2004 remake, which moved the action into the present day and cast Denzel Washington, Liev Schreiber and Meryl Streep in the key roles, swapped out the original’s Communist conspirators for a dead-eyed corporate board… and tweaked the ending just enough to make things feel even more hopeless.

The 70s produced a lot of great paranoid thrillers – Coppola’s The Conversation, Pakula’s The Parallax View and All The President’s Men and Schlesinger’s Marathon Man among them – but Sydney Pollack’s jittery character piece, starring Robert Redford as a CIA analyst trying to evade the assassin (Max Von Sydow) who’s already wiped out his entire team – sits atop the list because it narrows its focus entirely to the cat-and-mouse chase at its core, boiling its post-Watergate theme of governmental indifference to human life down to the relationship between two professionals who work for different departments, and the woman (Faye Dunaway) caught in the crossfire. It’s also a Christmas movie, so that’s nice.

Available for rental and purchase at Apple TV and Google Play.

Invasion Of The Body Snatchers (1978)

Of all the versions of Jack Finney’s sci-fi novel The Body Snatchers, this is the best by a mile, as screenwriter W.D. Richter ties the book’s insidious alien-invasion plot to the self-help movement embraced by Baby Boomers in the late 70s. (You’re being absorbed into an extraterrestrial consciousness, you’re becoming… actualized!) And Philip Kaufman’s direction sets the action in a bustling San Francisco that slowly gets calmer and quieter as the story progresses, with Donald Sutherland and Brooke Adams getting more and more anxious in contrast to their environment. (You know, the way Democrats in red states feel all the damn time.) There’s only one flaw: Richter’s vision for the distribution of alien seed pods seems kind of labour-intensive. Nowadays they’d probably just put their message of assimilation and obedience out on Facebook… and they’d probably encounter a lot less resistance.

Available to stream on Hoopla and The Criterion Channel.

In the movie version of All The President’s Men, Hal Holbrook’s Deep Throat sums up Watergate with one sentence: “The truth is, these are not very bright guys and things got out of hand.” Joel and Ethan Coen take that statement and run with it for their Washington farce, which finds half a dozen idiots – among them George Clooney, John Malkovich, Frances McDormand, Tilda Swinton and a perfectly cast Brad Pitt – running around Georgetown in pursuit of a CD assumed to hold top-secret information. (It doesn’t, but that doesn’t really matter.) Regrettably, its biggest joke – that the safety of everyday Americans rests in the hands of people who are incapable of thinking of anyone other than themselves – now feels more like prophecy than comedy.

Available to stream on Crave (with a Starz subscription) and Sundance Now.

The Coens worked on the screenplay for Steven Spielberg’s crackerjack espionage drama, which explains the streak of dry wit that runs through its narrative of geopolitical brinksmanship – and the ease with which it collapses the U-2 spy crisis of 1960 down to the friendship between American lawyer James Donovan (Tom Hanks) and Soviet spy Rudolf Abel (Mark Rylance), which became essential to getting U.S. pilot Francis Gary Powers (Austin Stowell) out from behind the Iron Curtain. As with a lot of Spielberg’s late-period cinema, it’s a movie about people working very hard to trust one another and make the world a better place – while the system that runs that world does its best to thwart them. Look, even the pessimists need to be proven wrong once in a while.

Available for rental and purchase on Apple TV and Google Play.