What to watch on Crave in January 2022

NOW's critics pick the best new movies and TV shows this month, including Peacemaker, Somebody Somewhere and the season finale of Yellowjackets 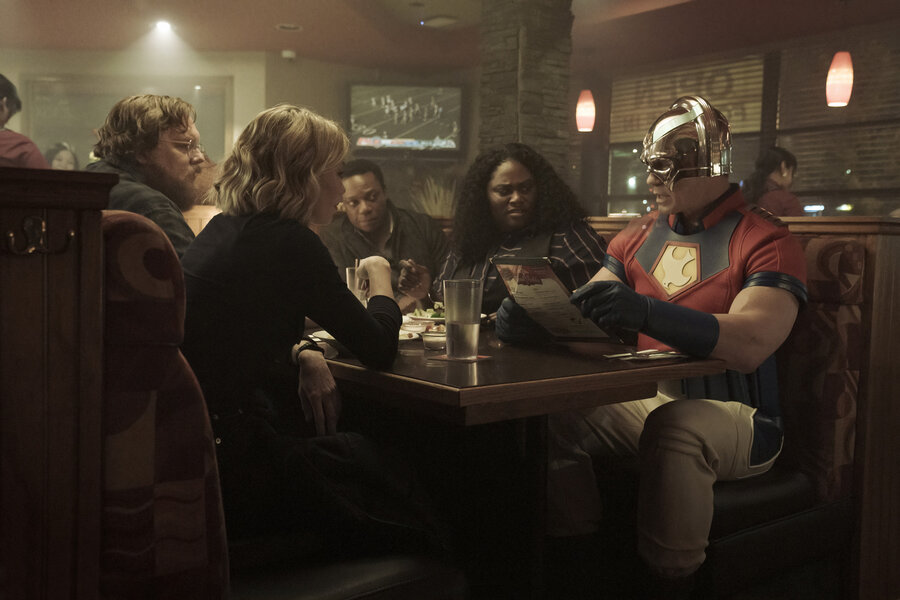 John Cena’s Peacemaker was one of the comic highlights of James Gunn’s The Suicide Squad last summer – a jacked-up, irony-free assassin committed to bringing peace to the world by murdering however many people it takes. HBO Max’s spinoff series – written and mostly directed by Gunn – picks up a few months later, with Peacemaker and his handlers Emilia Harcourt (Jennifer Holland) and John Economos (Steve Agee) assigned to a mysterious dark-ops team. This being a James Gunn joint, we can expect spectacular carnage, deep-cut character pulls from the DC Comics archives, and a catchy, idiosyncratic soundtrack. (This time, it’s hair metal.) Premieres January 13

Get ready for more drama and glittery eyeshadow because we’re finally back with East Highland High’s misfits. Based off the trailer, it looks like this season is going to be even more chaotic than the last one, with glimpses of an unknown hand holding a gun and a swarm of police vehicles. We also see more of Rue [Zendaya], who’s since relapsed. She seems to have an “amazing plan” for her pills-filled suitcase that she’s been wheeling around. Premieres January 9

This show about a group of entitled millennials has had a surprisingly long life, but it’s stayed fresh by shape-shifting genres nearly every season. It’s done mystery, murder thriller, comedy and courtroom drama, and it’s sure to go in surprising directions again this time around. Last season ended with our anti-heroine Dory (Alia Shawkat) finally escaping form her kidnapper (Cole Escola), and now she reunites with her co-dependent friends – played by the perfectly cast ensemble of John Reynolds, John Early and Meredith Hagner – and now she enters into a deal with a charismatic tech billionaire played by Jeff Goldblum. What could go wrong? Whole season drops January 7

The spiritual sequel to cult TV classics Eastbound & Down and Vice Principals, Danny McBride’s comedy about a megachurch and the mega-rich televangelist family at the heart of it enters its second season. Like Succession but with Jesus instead of media, the religious satire is really about high-stakes family drama. And it has a similarly stacked cast, with Edi Patterson, Adam Devine and John Goodman joining McBride at the top of the bill. Season one was an underrated gem (sorry), so it’s worth catching up before the next one drops. Premieres January 9

You might recognize Bridget Everett from her work on TV’s Inside Amy Schumer and Camping and her scene-stealing supporting work in movies like Trainwreck and Patti Cake$. She’s also one helluva cabaret performer, with a huge voice. She puts that voice to use in this new seven-episode semi-autobiographical series, in which she plays an aspiring singer returning to her home in Kansas after the death of her sister. Word has it that fellow Manhattan cabaret star Murray Hill also has a recurrent role. Premieres January 16

We Need To Talk About Cosby

Set to arrive on Crave just a week after its Sundance premiere, this four-part Showtime documentary from producer/director W. Kamau Bell (CNN’s Emmy-winning United Shades Of America) will examine the cultural legacy of the disgraced sitcom star, “weighing his actions against his indisputable global influence through interviews with comedians, cultural commentators, journalists and women who share their most personal, harrowing encounters with Cosby.” Premieres January 30

This time-shuffling Showtime series from writers Ashley Lyle and Bart Nickerson (Narcos, Dispatches From Elsewhere, Narcos: Mexico) landed in mid-December with a bang, its time-shifting narrative of a high-school girls’ soccer team struggling to survive after a 1996 plane crash in the Canadian wilderness – and the complicated lives of the survivors 25 years later – playing as a perfect mash-up of Lost and Heathers. Sophie Nélisse, Ella Purnell, Jasmin Savoy Brown, Sophie Thatcher and Sammi Hanratty are among the teenage protagonists who may or may not be heading towards savagery and cannibalism; Melanie Lynskey, Tawny Cypress, Juliette Lewis and Christina Ricci play the present-day women suddenly forced to work through their long-buried issues. The first-season finale drops January 16, so you have plenty of time to get caught up. Sundays through January 16

Here’s something for The Downton Abbey set, co-created by that series’ Julian Fellowes. The Gilded Age takes a look at the clash between old money New York City (personified by Christine Baranski’s gloriously named Agnes van Rhijn) and the nouveaux riches (Carrie Coon and Morgan Spector’s Russells) trying to elbow their way into society in the late 1880s. With a cast that includes Cynthia Nixon, Denée Benton, Taissa Farmiga, Jack Gilpin and Nathan Lane, this ought to make addictive prestige viewing as we wait out the pandemic. Premieres January 24

Like the Nicolas Cage drama Pig, this dark Danish comedy (which reunites Men & Chicken filmmaker Anders Thomas Jensen and star Mads Mikkelsen) uses the structure of a revenge picture to explore something else entirely. Mikkelsen plays Markus, a soldier whose wife is killed in a tram disaster – which a trio of scientists (Nikolaj Lie Kaas, Lars Brygmann, Nicolas Bro) insist wasn’t an accident, but a targeted hit on another passenger. Markus’s need to avenge his wife’s death – and, more importantly, to find someone to blame for it – leads to a whole mess of unforeseen consequences, as Riders Of Justice reveals itself to be as interested in the mechanisms by which men convince themselves they’re in control of their chaotic lives. Also, it’s pretty funny. January 7

Here’s the full list of new titles available on Crave in January 2022. The * symbol indicates a TV show or movie that is only available with the Starz add-on.

Doctor Who: Eve Of The Daleks
Harry Potter 20th Anniversary: Return To Hogwarts

Astrid And Lilly Save The World (season 1, episode 1)

And Just Like That… (season 1, episode 9)
The Congregation (season 1)
Peacemaker (episode 5)

Back Of The Net
Crimson Peak*
Dr. Seuss’ The Cat In The Hat
Dr. Suess’ The Lorax
Frailty*
Jacob’s Ladder*
The Many Saints Of Newark
Nutty Professor II: The Klumps*
Riders Of Justice
Sex And The City 2
Trigger Point

1000 To 1
Hearts Of Darkness: A Filmmaker’s Apocalypse*
L.A. Story*
The Midnight Meat Train*
Near Dark*
Nobody
Ray Donovan: The Movie

Fanny: The Right To Rock

The following titles are leaving Crave in January 2022.

And The Birds Rained Down

The Song Of Names

Ailo’s Journey: The Amazing Odyssey Of A Newborn
Robert The Bruce

In This Together: A Bell Let’s Talk Day Special
Reboot (seasons 1-4)