Tired of waiting, the local DJ/producer has put out a new album with dj genderfluid – her first new music in nearly a decade 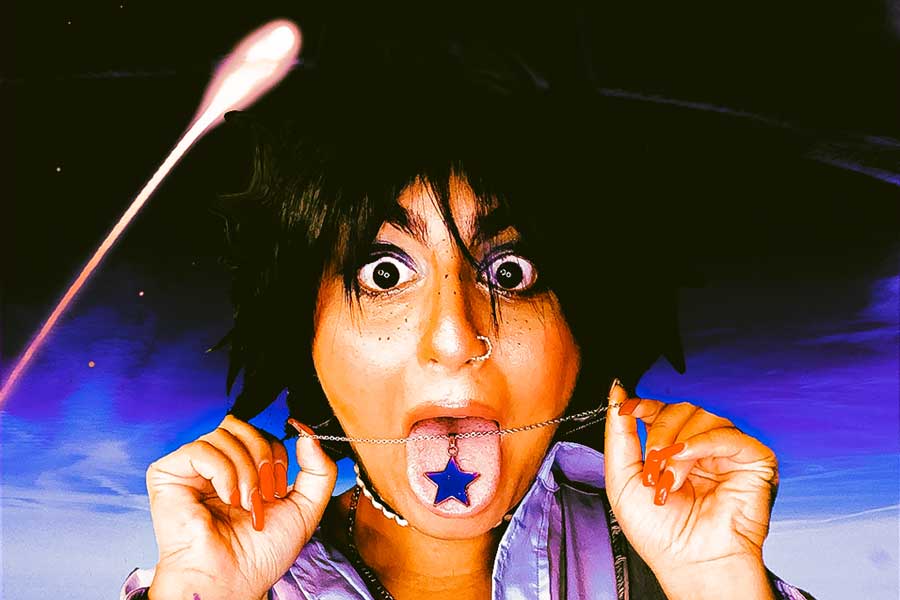 Some of us are still lamenting all the party invites we turned down pre-pandemic. Not Chippy Nonstop. The DJ/producer/vocalist is a queen of the night whether she’s behind the decks or dancing on top of tables.

“Everyone’s complaining, saying ‘I should have done more when shit was open’ but I was always in that mindset of taking advantage of every moment anyway,” she says over Zoom. “I don’t feel like I really missed anything before but I’m ready to get back into it.”

After the prolonged release of her joint album with dj genderfluid, she’s just ready to get back to the rave. They delayed the release, wary of the project slipping through the cracks because they wouldn’t be able to perform it live. Over time they realized the perfect moment to drop it wouldn’t be coming anytime soon.

The album is the perfect transport, taking you through every moment in a night out: from getting ready at a friend’s house, anticipating the debauchery of the evening to the pinnacle peak on the dance floor to the early morning come-down. As frenzied as a typical Chippy set, the songs move from techno to acid house to drum and bass. Her vocal energy is as nonstop as the north of 150 BPM DJ sets she’s known for, with abrasive lyrics daring you to keep up.

The DIY productions came together in a little over a month, with some of the songs written and produced pre-pandemic. Nonstop says the collaborative process between her and the anonymous figure dj genderfluid was very hands-on and they always had to be in the same room as they built the tracks together.

Before lead single Straight To Hell was released in 2020, Nonstop hadn’t released original music in seven years. She started making music when she was 16, growing up in California. Her notoriety on the party scene soon turned into her getting invited to studios and being featured on a Major Lazer track called Wind Up. Over time, she built a name for herself as a cheeky rapper and started songwriting for other artists.

In 2015, her widely-documented deportation from the States left her in Vancouver and back at square one. “I had to start my life over,” she says.

Eventually, she made her way to Toronto and since she already knew how to DJ she started booking gigs to make enough money to support herself. DJing and the club community quickly took over her life. She launched and refined Intersessions, a workshop series that works to counter gender disparity in electronic music. A local scene stalwart, she appeared on the cover of NOW Magazine’s inaugural Sound of Toronto issue in 2019.

Once she settled and realized she was making a stable income from DJing, she felt ready to get back to making her own music. When she was in Los Angeles, writing for other artists, she got stuck in the mindset of creating with other people in mind. ”You’re just in sessions with other people, writing their vision,” she says. “And so your vision, it kind of feels suppressed.”

Now, she feels more in control and sure of the intention of her songwriting.

A brief tour before lockdown to Istanbul, Turkey, Sofia, Bulgaria and Mumbai, India also inspired her in unexpected ways. She was surprised to find very involved queer dance music scenes in each of the cities.

“You don’t always realize that there’s a community in every place. Even though I’m Indian, I always thought they played only very mainstream EDM but there’s so many niche communities. There are queer people in every place and they create that sense of community and that support system everywhere.”

The club is deeply embedded in Nonstop’s imagining of this new album – down to the fact that the songs were created with DJs in mind. She thought about technical things, like making sure the tracks have eight bar intros to make them blend into other tracks seamlessly. You can hear that in the gradual build of Straight To Hell or No Sleep. There are so many moments within the songs where they can be taken in totally new directions by a DJ who wants to experiment.

As we tentatively imagine a post-COVID reality, the lyric from album closer, Accelerate, is a perfect refrain: “I’m a hedonist, I want thrills.”