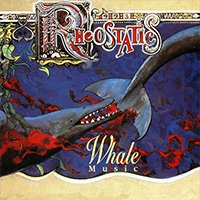 Rheostatics' Brave New Waves session is getting released on vinyl, CD and digitally on May 5.

There was much lamenting over the show’s cancellation in 2007, so it’s no surprise that in this age of reissuing everything and constant anniversary celebrations that a label would seize the opportunity to get the show back into our ears…. and onto our turntables.

Toronto’s Artoffact Records have done just that, announcing today that it will release several early Brave New Waves sessions on vinyl, CD and digitally for the first time. The first set arrives on May 5, with sessions from Rheostatics and the Grapes of Wrath. Notably, last week the Rheos announced four shows at the Horseshoe from May 24-27.

“A few years ago I got to thinking… why doesn’t Canada have its own Peel Sessions releases?” Artoffact’s Jacek Kozlowski tells NOW. “We had the amazing program hosted by Brent Bambury, and loads of amazing bands did live sessions in the early years. But there was never a sessions series devoted to honouring the show and artists. So we met with CBC and the idea snowballed into something wonderful.”

Each release includes songs performed during the program and interviews with the session’s host. Schmidt hosted from 1995-2007, succeeding Bambury, who hosted from 1985 to 1995. The show was created after original host Augusta La Paix submitted a demo tape focusing on avant-garde culture that included music by Laurie Anderson, Brian Eno and Nina Hagen.

Artoffact specializes in Canadian reissues, mostly of industrial, punk and new wave artists, including Nash the Slash, the Gruesomes and 808 State, as well as new music by Xandria, 3TEETH and Skinny Puppy’s Cevin Key.