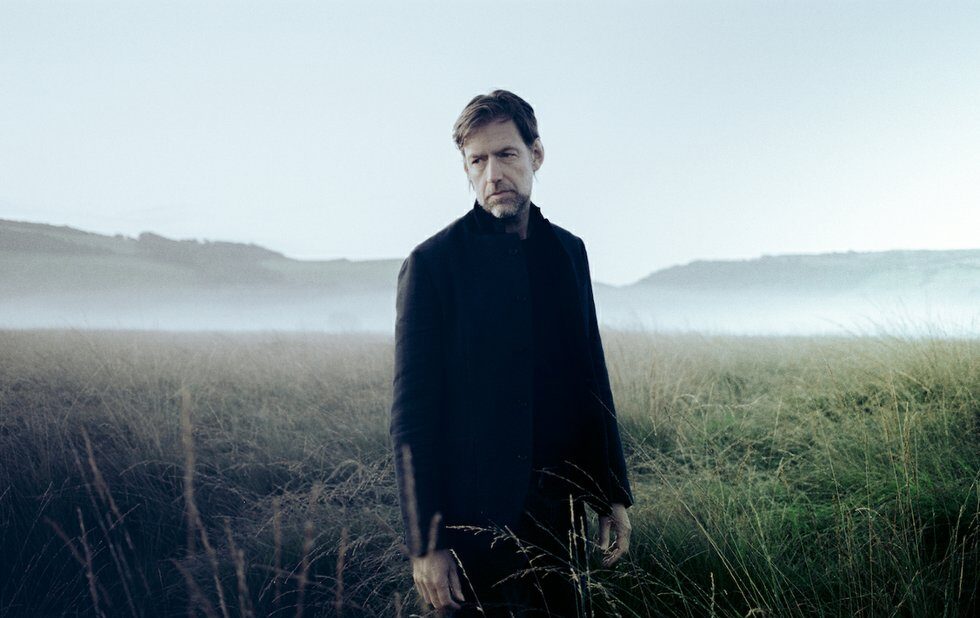 “I’m not going to lie, I’ve been nervous about this since Christmas,” said Ed O’Brien, looking tall and dapper in his black jacket after he and his band finished their first couple of songs at the Great Hall.

You wouldn’t expect someone who’s played to crowds of hundreds of thousands to get nervous playing to a crowd of less than 1,000 people, but this was the Radiohead guitarist’s first-ever solo show.

It was the first date on a small tour in advance of his upcoming album Earth, under the name EOB, which is due out April 17. And if he was battling nerves, he was in the right environment – this was an extremely sympathetic audience of Radiohead superfans, dressed in their rare merch and carrying records for him to sign, ready to take in whatever he was going to put out.

Over the course of about an hour and 15 minutes, O’Brien and his band (Hinako Omori, Ross Chapman, Dishan Abrahams and Alvin Ford, Jr.) played what was likely all the songs on the EOB album, plus a couple of covers for good measure.

One of the three songs he’s officially released so far, Santa Teresa, shows off his drifty instrumental ambient side, but if you were expecting the album to sound like Kid A, Radiohead’s most abstract album, this show dispelled that. There were moments of delicate finger-picked acoustic guitar and chunky Just-style chording, but what stood out were the unabashed pop-rock melodies. Radiohead long ago shook off early comparisons to Brit-pop and U2, mostly by following their own more intellectual paths, but you could hear it in the anthemic choruses of O’Brien’s music.

O’Brien said he’d never felt compelled before to make a solo album, partially because he’s devoted himself to being a dad and partially because Radiohead is creatively fulfilling. But what convinced him, he said, was the responsibility to bring people together during a time of divisiveness. “The most important thing at the moment is for us to be kind to each other.”

There was an unfeigned earnestness in the music that’s often obscured in Radiohead’s 20th century catalogue, and on the solo albums and soundtrack work of his bandmates Thom Yorke and Jonny Greenwood. O’Brien sang about Ponzi schemes and economic collapse, but brought a straightforwardness to the political material that hasn’t been present since at least 2003’s Hail To The Thief. And when he sang about loneliness and isolation, it was in an open-hearted way that didn’t hide behind surreal paranoid metaphors that you could spend hours picking apart on forums. It was all laid out on the table for you.

Sometimes that meant the lyrics slipped into cliché, like the acoustic sketch Long Time Coming’s “all we ever need is someone to say ‘I believe in you’” refrain. Or the Breaking Free pseudo-rhyme of “who knows where we’re going? / who knows where the flow is?” But there was something satisfying in hearing O’Brien embrace that side of himself. For all of Radiohead’s expansion of the language of rock music, their experimentation sometimes comes off as a defense mechanism, and this was music with the guard let down. Still, the songs often felt a bit like first drafts – perhaps they could use a few of Radiohead’s unpredictable left turns.

EOB only has an album’s worth of songs, and so they often ended with extended jams. O’Brien even joked that they were inspired by Phish – another band you’d probably never expect to be compared to a member of Radiohead. They even got a bit funky, with O’Brien busting out some mini dance moves. That came out in the covers, on the kraut-rocky drive of Ulrich Schnauss’s On My Own, and especially on the groovy final encore, Labi Siffre’s I Got The… (the sample that gives its beat to Eminem’s My Name Is), which even left space for a drum solo

Despite his purported nervousness, O’Brien seemed confident onstage and was in good spirits the whole time, clearly enjoying himself. It may have been his first solo show, but it’s not like this was open mic night at the local Oxford pub. Still, though he switched guitars almost every song, it was a bit different than what he was used to. His entire crew, he joked, was about a quarter of the size of Radiohead’s lighting crew.

There were some people in the audience who were clearly thrilled to be this close to a member of Radiohead, and O’Brien spent some time giving out handshakes and high fives and signing memorabilia after the show was over. When he returns in May, it’ll likely be a bigger venue. There’s a good chance you’ll never see another Radiohead-related show so purely fun and casual – especially in Toronto.