Club Quarantine, a queer party created by four DJs and creatives in the city, is the perfect socially distant collective nightlife experience – and people all over the world are tuning in 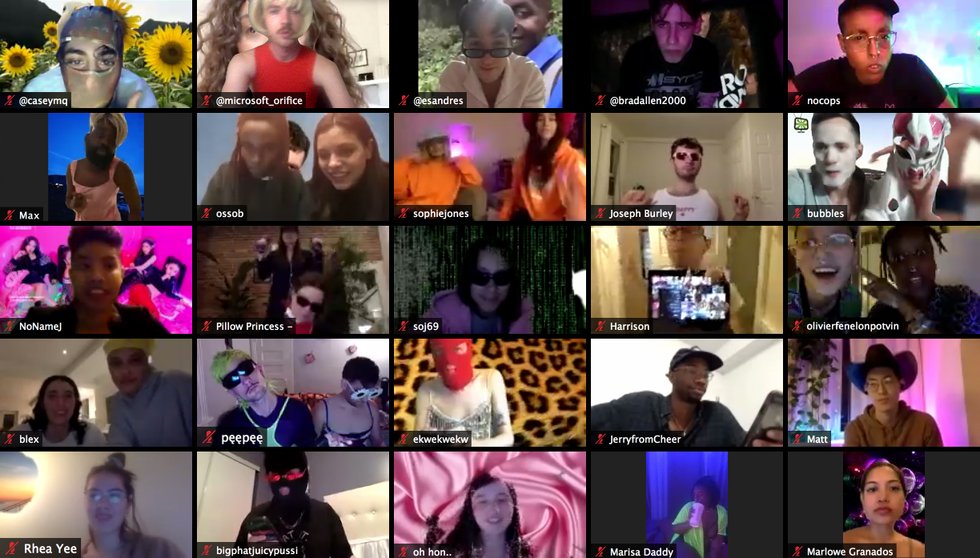 The dance floor is one of the best community-building spaces we have. There’s a suspension of boundaries that draw us closer together, allow us to be free, support one another and experience joy without saying very much at all. But with the rise of social distancing and self-isolation following the rapid spread of COVID-19 across the world, we won’t be dancing together for quite some time.

In Toronto, these safety measures have immediately impacted the livelihoods of DJs, musicians and performers whose work requires social gathering. So what are the city’s party throwers and party-goers to do?

On the first weekend of city-wide social distancing, they all went live on Instagram together and quickly realized they wanted a more interactive way to convene online, one that allowed for multiple people to participate. They chose Zoom because everyone who tunes in can be seen and have their moment in the spotlight.

“When people come online, they feel free,” says MQ. “You see everyone going off, we’re live, we’re together, we’re having this moment. It’s a reminder that you’re not alone in this moment.”

People have been tuning in from across Canada, the United States and even Italy, Argentina and New Zealand. The first night they went live on Zoom (March 16) MQ and Sierra DJed for a group of 20 people. Four nights later, I tuned in for the first time and there were 170. Last night (March 20) they hit 350. The team is prepared if the party keeps growing – Zoom’s maximum capacity is 1,000 users on one video call.

They’ve already received so many requests from other DJs wanting to play that they have an artist submission portal in the works. MQ says their first focus is booking local DJs who are out of work and helping them make a bit of money from donations. Club Q is free to join but they have a PayPal donation link in their Instagram bio to help pay DJs and performers. As much as the virtual club is about coming together, it’s also about offsetting some of the financial burden Toronto’s nightlife community will experience in the coming weeks.

“[The virus] is not slowing down, we’re seeing cases still spiking and we’re just at the beginning, which is really scary,” says Sierra. “But I feel like that means we’re going to be in here for a minute.”

It’s a party centred around queer people. They ask that if the number of people trying to get on exceeds the server’s capacity, that non-queer people leave to make space.

“I think the party comes from the necessity to have some kind of outlet,” says Sierra. “And as a queer person, the club, nightlife, is our safest space. There’s something missing without that space.”

Club Q is an exhilarating virtual space unlike anything I’ve ever experienced on the internet. The first night I joined, Max Mohenu and Myst Milano were the guest DJs along with resident DJ Casey MQ, they make up local club music collective Raven’s Vision. Drag queen Vanity Bontemps gave a pop-heavy performance of Britney Spears, Lady Gaga and Doja Cat from her living room.

People can select personalized backgrounds for the livestream. I saw everything from pop culture nods to Love Is Blind and The Devil Wears Prada to very on-the-nose images of empty grocery store shelves.

Even though most people were tuning in from living rooms or bedrooms they came with ornate outfits, over-the-top makeup looks and glow-in-the-dark accessories. There’s something about the performance and act of getting ready for a night out that can sometimes be the most fun.

Throughout the stream, moderators made sure that everyone got a spotlight moment. I spotted vogue dancers Maldita Siriano and Aura West breaking it down during Milano’s set. But regardless of look or skill level, everyone got a moment to shine.

Above all else, the party feels profoundly accessible – more so than most IRL clubs in the city.

“People were posting comments on the chat saying this is the first time that they can be online and be connected to the club, in their own way,” says MQ.

The gatekeeping and security of normal club spaces completely disappear in this context so they have measures in place to maintain the safety and comfort of all participants. In the comments section, someone from Trip! Project provides drug safety and harm reduction advice.

“We never know who’s going to come in and all we can do is constantly moderate, to make sure that if anyone is doing something that doesn’t align with our values, they get removed,” MQ says. “It’s actually way easier than in the club,”

The party will be going on indefinitely. There is an all-day party in planning stages so people from different time zones can join. On March 21, two Paris-based DJs will start off the night at 6 pm with a back-to-back set, followed by the regular Toronto time zone party. Six straight hours of virtual partying.

Once we return to normal levels of social interaction, they’re planning an IRL Club Q party. One commenter on March 19 mentioned they could go live from inside the venue to maintain the accessibility aspect.

“It’s going to be the most extra when we’re allowed back out,” Sierra says, looking forwards..

Until then, Club Q is a preemptive measure to stave off the worst effects of social isolation. And dancing alone in your room has never felt like such a collective experience.

Note: An older version of this story used Ceréna Sierra’s dead name. The piece was published before she changed names. It has been updated.