"It’s going to be important for us to build things together because we really have no choice," Schmidt says ahead of their new EP, You Wanted Country? Vol. 1 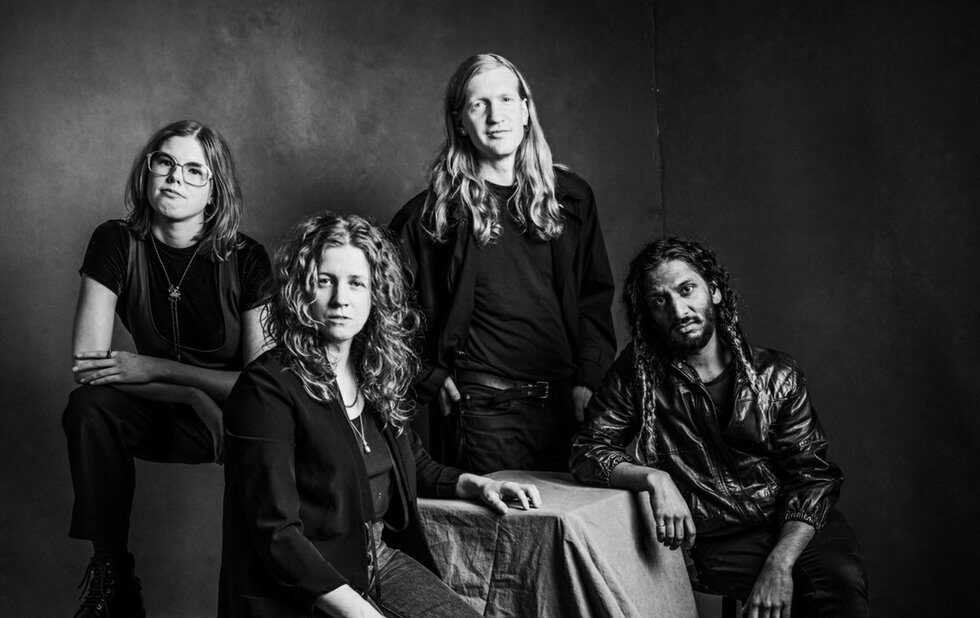 “I think it’s a bit of an abdication of power to be like, ‘oh, no one’s free, no choice you make in capitalism matters,’” Simone Schmidt comments over the phone. The Toronto singer/songwriter is unpacking the new Fiver song, It Is What It Is. Flipping cliché on its head over lap steel and wah guitar, they gesture to the responsibility inherent in free action: “It seems to me that nobody is free but the few who are allowed to choose had better pick a good cage.”

That’s an attitude that resonates clearer than ever at a time when we’re physically distancing to stop the spread of COVID-19. And as Schmidt self-quarantines with an undiagnosed cough, they feel it even more. “We’re all in the cages of our own apartments if we’re lucky enough to have our own apartment,” Schmidt says.

It’s also emblematic of Fiver’s new EP with the Atlantic School of Spontaneous Composition, You Wanted Country? Vol. 1 (officially out April 3 via You’ve Changed, but available early on Bandcamp). A trans-provincial effort hatched with a group of Maritimers known for their roots in improvisational music (Jeremy Costello on bass and vocal duties, Nick Dourado on lap steel and piano and Bianca Palmer on drums), it’s founded on reciprocal freedom. That carries even through loose, paisley country covers of Dillard and Clark, Johnny Paycheck and Willie Nelson.

Watch a mini-doc on their cover of Paycheck’s (It Won’t Be Long) And I’ll Be Hating You premiering below:

We spoke to Schmidt about the new album, why music communities need to come together and how the COVID-19 pandemic is exacerbating unsustainable dynamics that already exist for touring musicians – and hopefully paving the way for their restructuring.

This EP is mostly covers and interpretations of country songs, plus one original. Why did you decide to do that now?

For me it’s hard to watch the superficial comeback of country, because it seems like it’s mostly in fashion rather than in terms of songcraft. A lot of the parts of the tradition that I think are the most beautiful aren’t the things being celebrated at the moment. I really believe in covering songs in order to learn traditions. I believe in songs being inherently teachers, not just in terms of their content, but in their form.

How would you describe the experience of working with this new band, the Atlantic School of Spontaneous Composition?

What I learned from all of the players – Bianca, Jeremy and Nick – is the importance of listening. And because everyone’s naive to the tradition and there are no stock licks, it’s even more about listening. No one’s trying to implant a G-run anywhere, there’s no pentatonic scale, it’s just really dynamic in that way. So my singing also got to breathe in a way that often is not allowed when playing with bands where there’s less listening and more adhering to the conventions.

Why did you choose this title for the record? What is your relationship to the traditions of country?

For me, I always want to be pushing the traditions that I’m working in, folk and country, and I’ve often done that through the subject matter. With the Atlantic School of Spontaneous Composition, I’m interested in pushing it instrumentally. That doesn’t mean novel production techniques, it’s actually about the playing. You Wanted Country? is like an introduction to us at our most conservative, and forthcoming recordings will be an evolving take on country music.

What can you tell me about the IRL: Music Labour Summit you and Nick have been organizing with Sappyfest?

We wanted to talk about meeting in real life because generally we’re pushed towards online platforms that are often censored or on which people feel they have to self-censor. We wanted to take that burden away from people and have people really look at each other and be in each other’s presence, which is a really basic foundation to organizing. Although right now it’s impossible, so that’s really weird.

When we started to organize it, we were thinking about how poor all of our peers are and how people are forced into competitive models in music when in fact music is something everyone can have. So just trying to look at the way in which the commodification of music and our own identities as musicians impedes us from finding solidarity. And then just wanting to get people together – rather than moan and groan about our lot, to really share information.

We don’t have an agenda for what we want to come out of it, except that we want people to be exposed to a cohesive body of research and information and teaching and then work with that information to figure out how we want to grow a community of musicians.

What do you think musicians can take away from this pandemic?

What’s interesting about something like a global pandemic is that it really fucks up the order of everything but exacerbates a lot of dynamics that already exist, clarifies them. We see a lot of very quick movement right now on the part of different institutions to make short-term measures happen. The [National Arts Centre] is doing this digital conference stuff, and I think we’ll see FACTOR and the [Canada Council for the Arts] roll out different provisions for working musicians – I hope.

But ultimately, I think the economy has totally collapsed. And so all of our lives are going to be really different for a really long time, even without this pandemic. It’s going to be very important for us to build things together and conspire because we really have no choice. There will always be capitalists at the forefront trying to figure out how to make money off of our disasters.

I really hope to see a full restructuring of how we’re relating to each other. For a long time touring has been unsustainable for artists – not just in terms of our mental health, but in terms of the environment, the sheer amount of fossil fuels that are burned to cart around these small businesses that we call bands. Those things have to change anyway.

This is the first of many. People who have been studying climate change and globalization have been saying that one of the things that’s gonna happen more are these pandemics. We all have to keep these things in mind as we rebuild after.