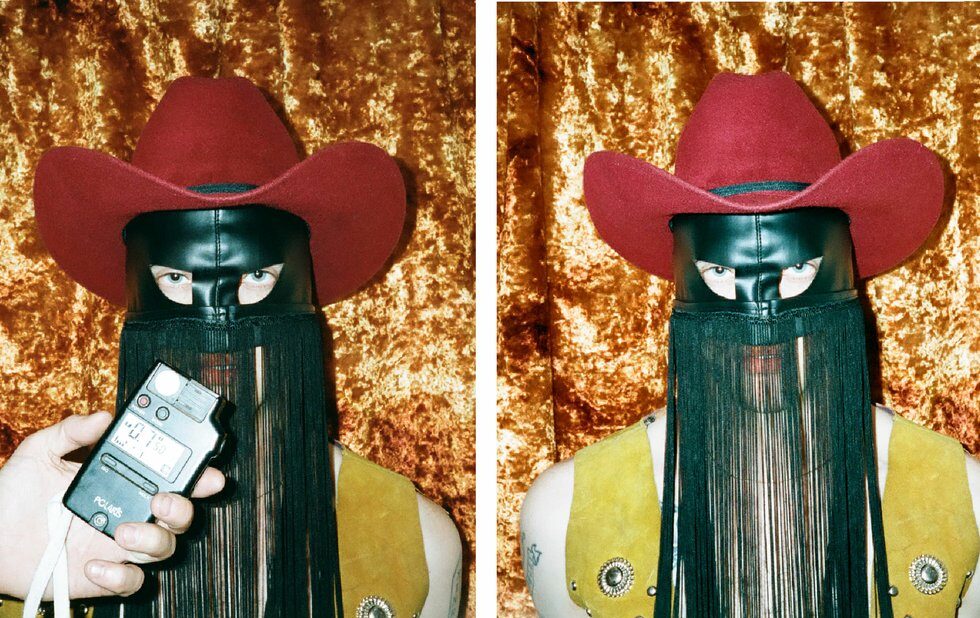 Orville Peck’s face may be hidden behind a fringed leather mask, but his feelings are proudly laid bare in his lyrics.

On the anonymous country crooner’s debut album, Pony, out March 22 on Sup Pop and Royal Mountain, the singer laments the scars left from past relationships, wistfully remembers the men (and women) who would call him pretty and watches the boys as they walk on by.

While Peck does not consider his sexuality a guiding force behind this project, he’s happy to whip out his six-shooter and break the mould.

“I totally get when people say country songs about same-sex relationships seem fresh, but I’m just singing about my own experiences,” he explains over the phone from Toronto – where he’s currently based, among other places. “I also have songs about buffalo.

“I’m not trying to turn country music on its head or let [my sexuality] define who I am as an artist, but of course at the same time it is a huge part of [who I am].”

Peck admits there’s more representation now, but says that wasn’t the case when he was growing up.

“Songs about being gay, queer, bi or whatever were rare,” he says. “When I found out Willie Nelson sang a song about gay cowboys, it was a comforting feeling even if it was subtle. So much of country is fixed on one sort of lifestyle, but that made me think, ‘Wow, I exist in those people’s world.’ If I’m providing that for someone, I think it’s wonderful.”

Peck meticulously designs and sews his masks by hand. He now has more than 15 of them. Onstage, where he’s often backed by the band Frigs, he channels a candy-coloured clown called the Sandman, and he clearly enjoys the theatrical air of mystery. But Peck believes it’s precisely his anonymity that allows him to connect on a personal level.

“The initial assumption is that I’m trying to hide something about myself, or keep a distance between the audience,” he says. “I studied mask as a performance art form, and the interesting thing is that – especially what is called a neutral mask – is much more exposing. It lets me be more vulnerable on stage and in my songwriting, which gives me a confidence that I wouldn’t have without it.”

The timelessness of Peck’s storytelling, studied devotion to country’s traditions and subversive flair are all on display in his stunning video for Dead Of Night. Filmed at Nevada’s Chicken Ranch, a legendary, legal brothel that inspired the film The Best Little Whorehouse In Texas, and featuring many of the women who work at the business proudly proclaiming that “the West is still wild,” it celebrates outcasts like his hero John Waters. Peck doesn’t typically find himself in this kind of rough and tumble setting, but in his words, every time he performs could become a dicey situation.

“I’m walking out in head-to-toe rodeo fringe with a mask on singing country love songs about men,” he laughs. “The really rewarding thing is that it seems to reach such a crazy diverse group of people. Some of my biggest die hard fans are everyone from gay guys who are crazy Lana Del Rey Twitter stans, crust punks from Montreal or middle aged people from Wisconsin. It’s actually a real shock to me that so many people are connecting.”

On the album’s hard-heart-softening single Turn To Hate, Peck shares his conflicted feelings about existing on society’s fringes. For anyone working hard to survive in a gig economy, where good things can come to an end at any moment, it’s a relatable struggle to keep your resentment from building into negativity.

“I only realized this after the fact, but the big theme of my album is not feeling settled physically, emotionally and mentally,” Peck says. “A lot of people can relate to what I’m singing about in Turn To Hate because we’re a generation of anxiety. We have the expectation and pressure of the baby boomers but not the super lax mentality of young millennials who seem to go with the flow.

“For me, a cowboy is someone who struggles with being unsettled but also finds confidence in it. I have to remind myself daily that it’s okay to remain on the outskirts of town.

“If you’re not tied down, you can just get on your horse and ride.”