The historic Toronto concert hall isn't being renamed, but will form part of the new four-venue Allied Music Centre 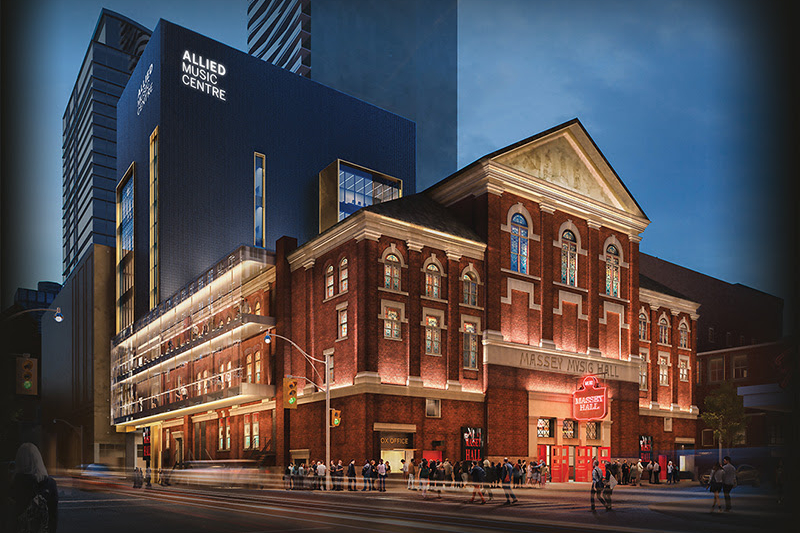 A rendering of Allied Music Centre and Massey Hall

Massey Hall has been closed since 2018 as part of a massive revitalization, a project that has continued during the COVID-19 pandemic.

As it turns out, the restoration of Massey Hall is bigger than Massey Hall.

In a video narrated by Canadian musician iskwē, who credits playing Massey Hall as a major part of her development, they’re careful to say the venue (a national historic site) is not being renamed.

“Massey Hall will always be called Massey Hall,” she says. But now it’s one part of a much bigger facility called Allied Music Centre.

Massey Hall has been gradually revealing renovation details from behind scaffolding, including the return of the first of 100 more-than-a-century-old stained glass windows and the “MASSEY MUSIC HALL” sign that’s been obscured for more than a century.

It had also previously been revealed that the reopened Massey Hall would eventually include two new stages. Now, the details have come out on those stages and the rest of the new facilities being housed in the gleaming new seven-storey tower jutting out from Massey Hall.

Though there’s no hard reopening date (the pandemic has made targets a bit more uncertain), they’re still aiming for 2021.

The 4th Floor Club will be a 500-capacity venue that, similar to the new El Mocambo, will also have direct-recording capabilities. The venue, along with its smaller cousin two floors above, will be part of an artist development system that sees artists graduate to bigger stages on their way to venues like Massey Hall. They add some live music spaces as mid-sized Toronto music venues struggle and close during the pandemic.

Rendering of the 4th Floor Club at Allied Music Centre

That 6th Floor Theatre will be a more intimate venue. Considerably smaller than Massey’s main stage, it’s described as a “launchpad for emerging artists.” The venue will seat 100 people in theatre-style seating that is also retractable to turn it into a standing-room club or space for workshops, panel discussions and artist interviews. The Lounge, also on the sixth floor, is described as a “casual gathering place for the music community” and also a space for people to mingle at night before or after concerts.

The 7th Floor Studio at the top of the tower will be a professional recording facility. Artists can record or rehearse there, and it’s also a spot for hands-on music education. Also on the seventh floor, the Artists’ Lab will include digital audio workstations, practice rooms, space for media interviews and more. It will also house a new instrument library that will be “made available to musicians of all ages and abilities.”

That’s all in addition to Massey Hall itself, which will eventually reopen along with the rest of Allied Music Centre. The restored version will feature removable seating and capability for live broadcast and streaming (something that’s become a modest lifeline as many venues have turned to livestreaming during the pandemic.)

Below, the Basement Bar will be a spot for grabbing a drink before a show, but it will also have its own stage for intimate shows or after-parties.