NOW MagazineMusic20 Ontario music festivals to check out in summer 2019

20 Ontario music festivals to check out in summer 2019

From free street celebrations to experimental weirdness to a festival in an honest-to-goodness ghost town, here are the fests worth trekking to this summer 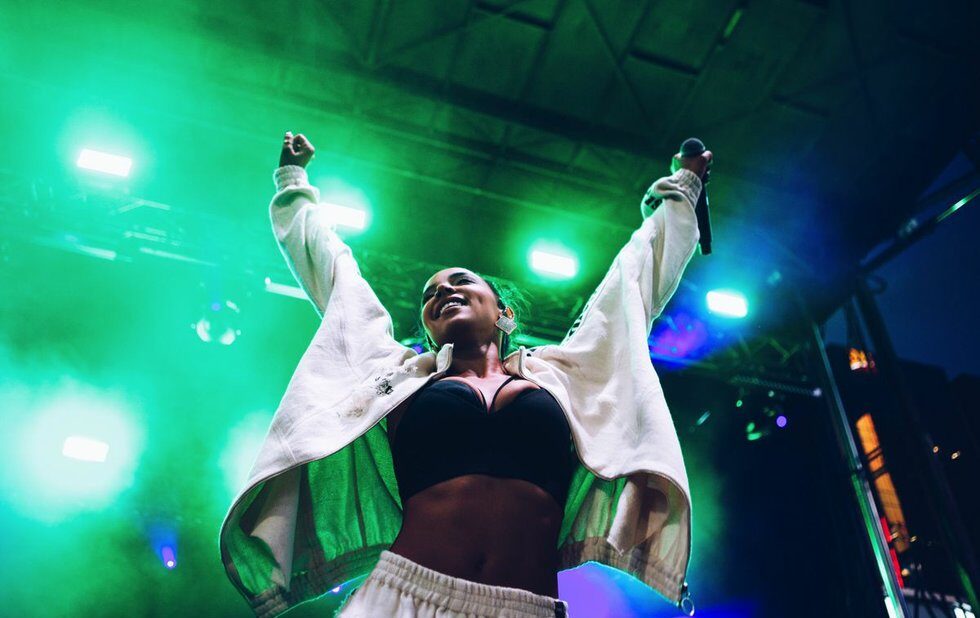 With Field Trip on hiatus, WayHome still on indefinite hiatus, no OVO announcement in sight and lineup announcements from Manifesto and Afrofest still to come, it may feel as though there aren’t a lot of options for festivals this summer. That couldn’t be further from the truth, with plenty of music festival offerings both in and out of the city.

We’ve put together a list of festivals within Ontario to keep your eye on, sorted by date.

Though not listed here, and not exactly festivals per se, it’s also worth considering concert series like Electric Island and Promise Cherry Beach. Don’t forget Toronto Pride and Caribbean Carnival, which both have robust music components. 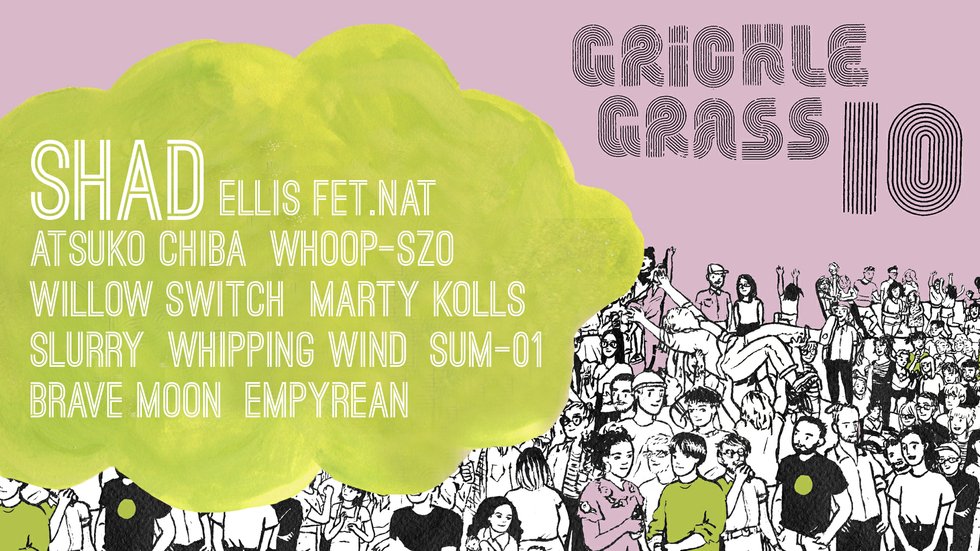 This edition of the beloved London-based festival will be its swan song, after a solid decade of combining family-friendly entertainment with forward-thinking music programming. Organizers of the sustainable living festival and fundraiser for Growing Chefs say they want to cap the festival off at 10 years – they’ve had a good run and the venue and nostalgic fixture of the fest, London’s Children’s Museum, will be moving. This year the fest – which has daytime family-friendly entertainment and a nighttime concert vibe – is headlined by Shad, Ellis, FET.NAT, Atsuko Chiba and Whoop-Szo, plus many more.

It’s hard to pinpoint when Dundas West Fest went from local curio to one of the biggest and busiest street parties in the city, but the size and scale of the event seems to grow each year. Two of the city’s best venues situated along this stretch between Brock and Ossington are using the occasion as an opportunity to launch their own festivals. 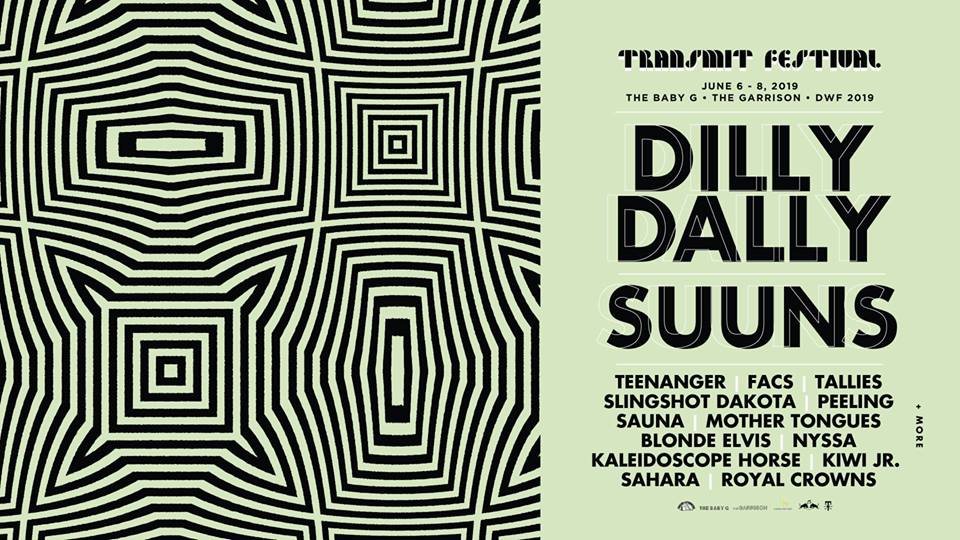 The Baby G/Garrison folks are hosting Transmit Festival inside and out on the street, featuring acts like Dilly Dally, Suuns, Teenanger and Nyssa. Also on board that weekend is Lula Lounge’s Lulaworld festival, at the venue plus free shows on the nearby outdoor stage. The fest runs from June 6 to 16 and focuses on international sounds and styles from both at home and abroad, including the Soul Motivators, Dandha Da Hora and Kellylee Evans.

If you have an ear for more experimental sounds, the third edition of TONE – programmed by Ron Gaskin (Rough Idea) Tad Michalak (Burn Down the Capital, Intersection), Karen Ng (Guelph Jazz) and Daniel Pencer – will be of interest. Artists include Montreal/Cairo act Dwarfs of East Agouza, Polaris Prize-long-listed act Bonjay, and the return of singer/songwriter Beverly Glenn-Copeland following his stellar performance at the Jam Factory last year. 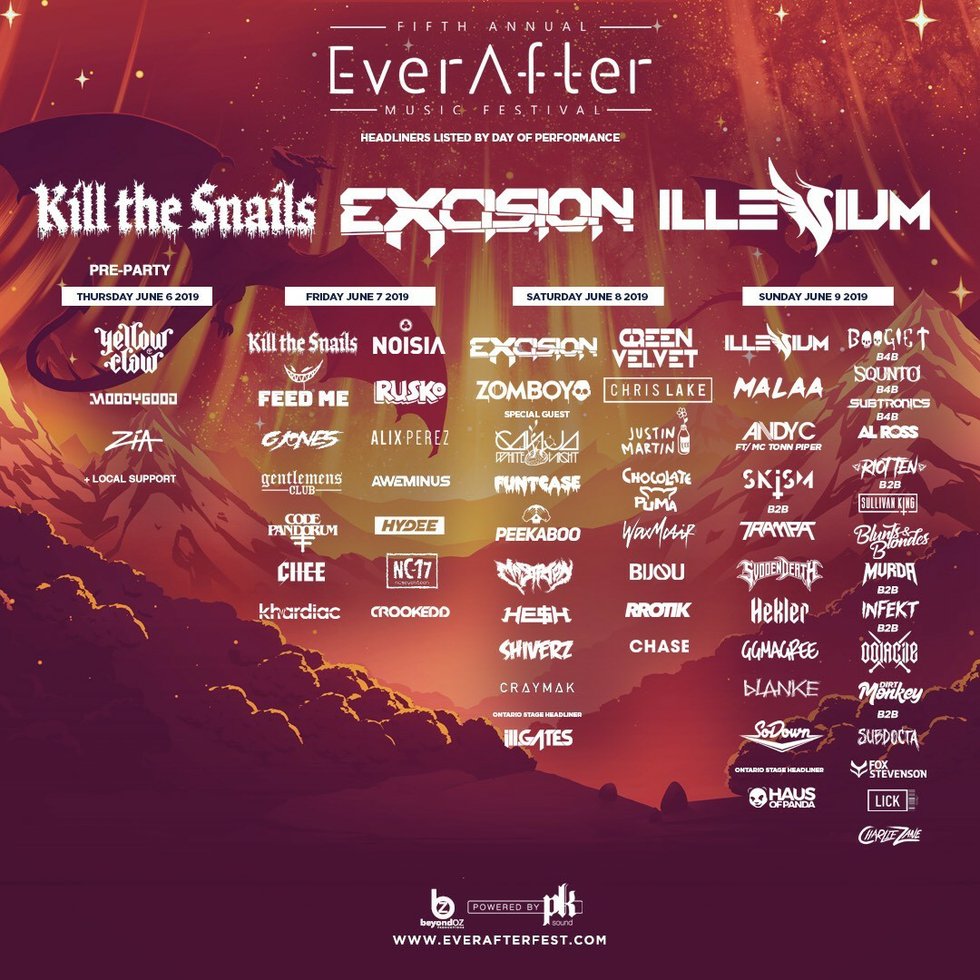 You don’t need to be downtown to get your fill of bass-heavy music. Now in its fifth year, this Kitchener festival drew around 30,000 attendees last year. Camping is encouraged, as is making full use of the water park to keep cool and carnival rides to keep your adrenaline pumping. ILLENIUM, Excision, Rusko and Zomboy are among the festival’s staggering list of headliners.

There are still some names to be announced for this year’s city-wide festival, but the 25th anniversary edition seems like it’ll be a big one. After tweaking its format over the last few years, NXNE is doubling down on the Festival Village in Yonge-Dundas Square, expanding to three stages around Yonge, between Dundas and Queen. And club-hopping wristbands are back to their 1993 prices: $29. Acts include American Football, CupcakKe, Santigold, Cold War Kids, Greys and more.

If you’re into jazz and experimental sounds and also feel like making a trip west, check out Hamilton’s Something Else! festival. Czech avant-garde violinist, singer and composer Iva Bittová headlines, with Toronto-based acts like Picastro and Eucalyptus sharing billing with Hamilton projects like SourPussy and interesting, one-off collaborations like that between alto saxophonist Brodie West and Chicago-based percussion master Hamid Drake.

This one’s a cornerstone for the summer music festival season in Toronto, and with headliners like Diana Ross and Norah Jones, it’s set to be another exceptional event. Appearances by Heavyweights Brass Band, Shad, Elaquent, Dominique Fils-Aimé, Joseph of Mercury, Brodie West and Donny McCaslin ensure there’s something for everybody – at both ticketed shows and free concerts throughout Yorkville.

This local showcase for EDM has an incredible lineup of big names, featuring pop production phenom and DJ ZEDD, homegrown #spacemom REZZ and a host of others including Paul Oakenfold and A-Trak.

By far the longest running and most storied festival on this list, Mariposa is intertwined in the histories of folk legends like Joni Mitchell and Leonard Cohen as being a springboard for their careers. This edition looks forward as well as to the past, featuring established acts like Tom Cochrane, Shakura S’Aida and Hawksley Workman and newer emerging artists like Ralph and Colter Wall.

The more neighbourly answer to the Toronto Jazz Festival is enjoying its 31st anniversary this year. The Beaches Jazz Festival is a month-long music celebration that culminates on the final weekend’s Streetfest (July 25-27), when Queen East shuts down in the evenings, singers, salsa drummers and bands tune up and families and revellers gravitate over from the parks and boardwalk to sample the vibes and food trucks.

This new festival at Edenvale Airport (near Wasaga Beach and with a great view of Blue Mountain) goes for huge headliner rock acts, and since those are in short order these days, it skews towards classic rock (Alice Cooper, Aerosmith, Lynyrd Skynyrd) and 90s CanRock (Matthew Good, Big Wreck, I Mother Earth, etc). And sure, two of the headliners are Kid Rock and Nickelback, but skip those and you can see Cheap Trick, Billy Idol and a serious bucket lister, Blondie. There’s also various tiers of VIP (and they really mean it, with cigar lounges, valet parking and celebrity chefs) and glamping, so these ticket prices fluctuate wildly. 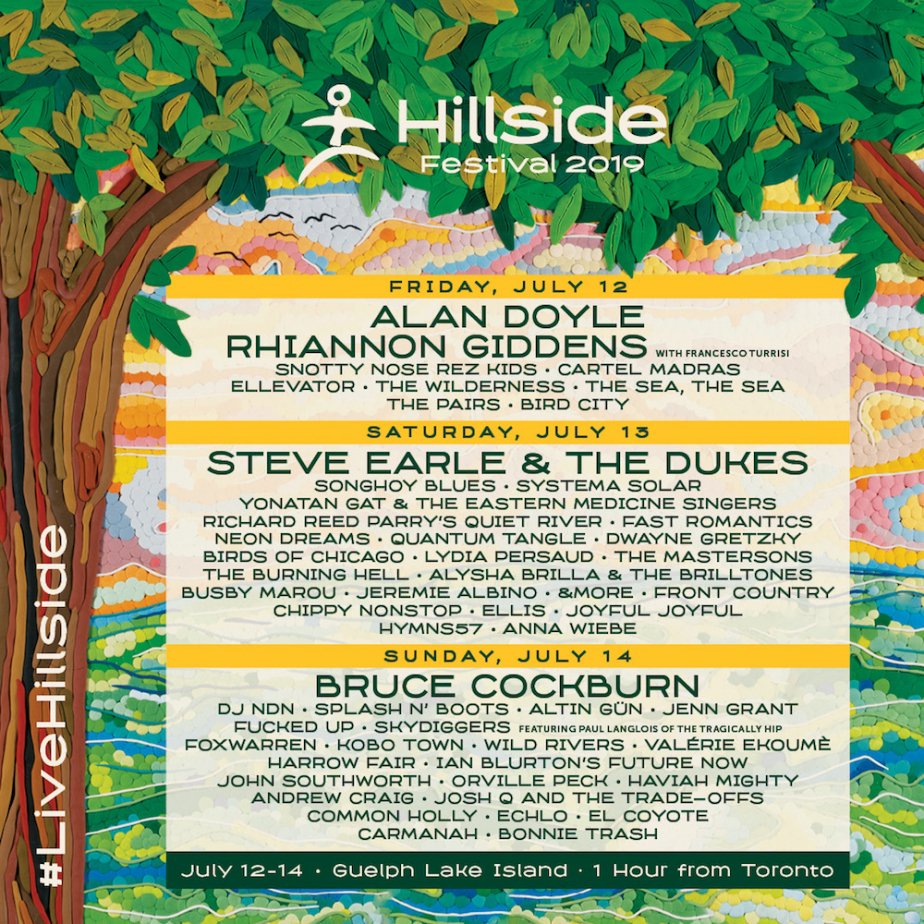 Scanning the lineups of festivals across the province, you’re bound to find the same few names pop up here and there. Strangewaves, however, boasts one of the most unique, definitive lineups of them all, with Chicago footwork pioneer RP Boo performing alongside trip-metal weirdos Wolf Eyes, composer, saxophonist and sound experimentalist Matana Roberts, Montreal-based folk artist Myriam Gendron. 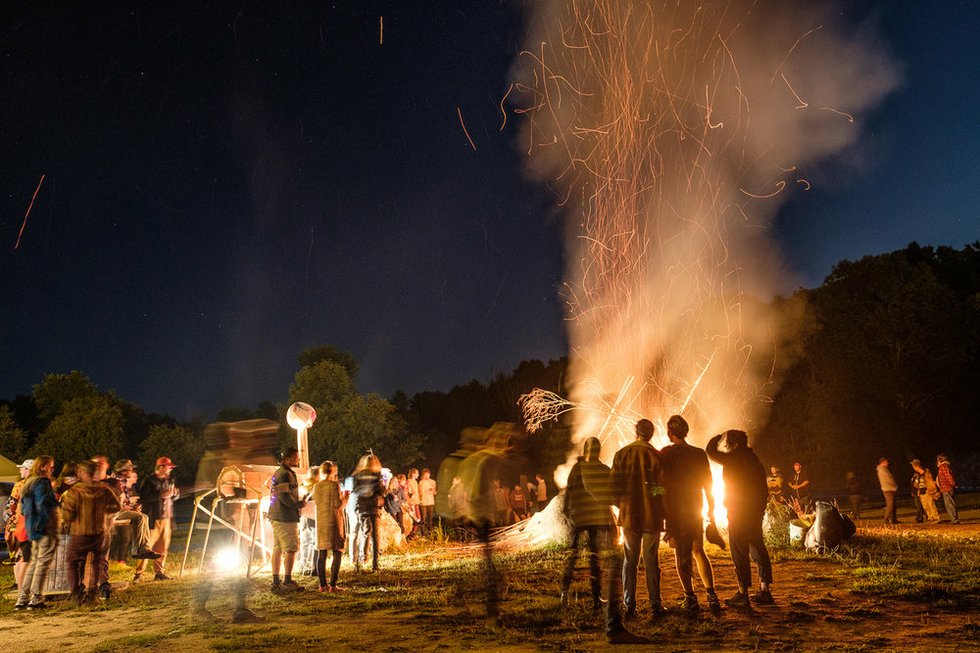 If the idea of going to go see bands like Dead Meadow, a Place to Bury Strangers, Orville Peck and Doomsquad isn’t enough of a draw then how about doing so while camping out in a friggin’ ghost town??? The event is situated in Frontier Ghost Town, 165 km northwest of downtown Toronto, where attendees are encouraged to take in the natural wonders of the space as well as the creepy, campy, frozen-in-time aspects of the town itself. 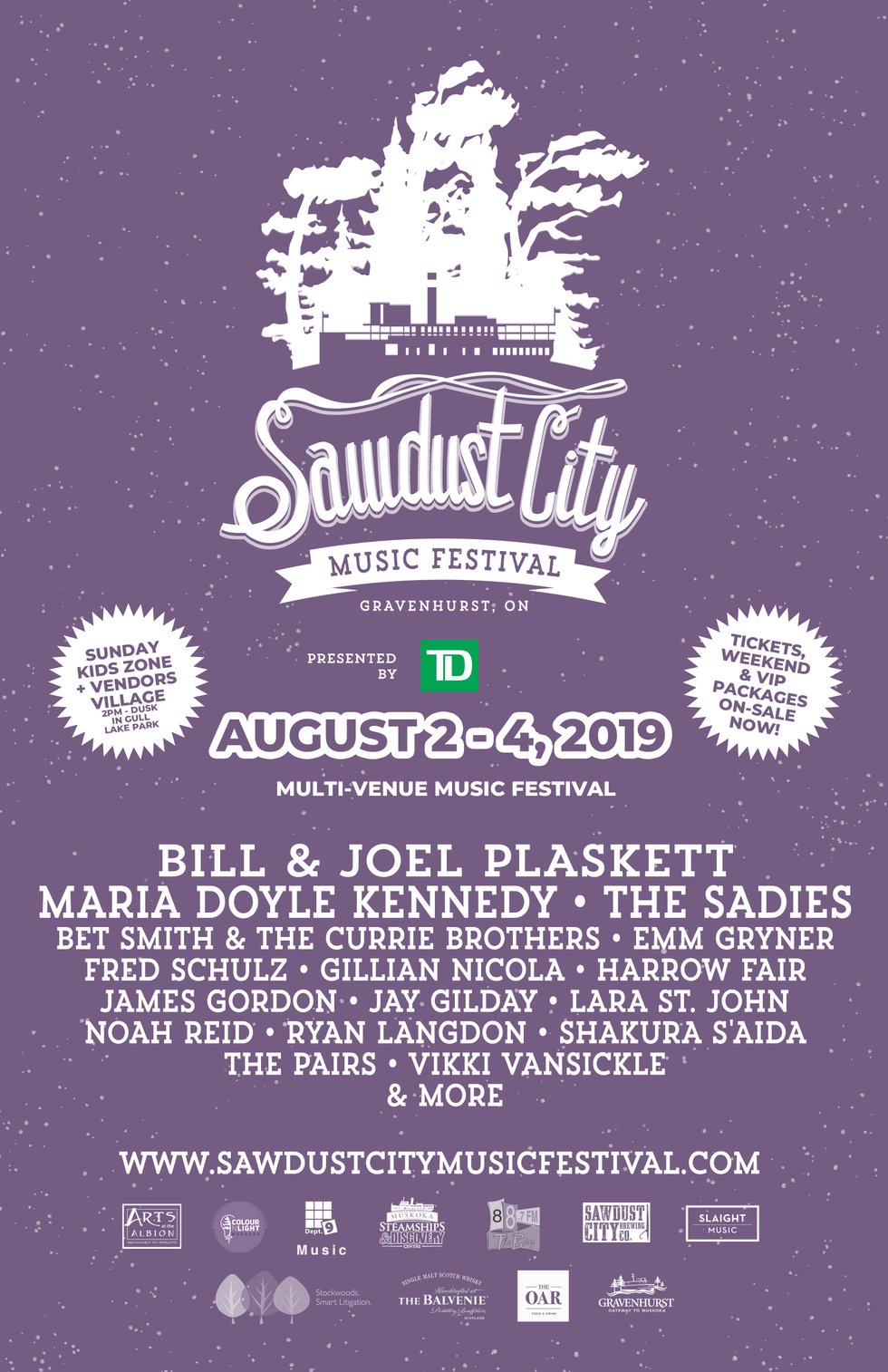 For those who like things a little rootsier, this multi-venue festival in Gravenhurst is what you need. It’s headlined by father-son duo Bill & Joel Plaskett, along with the Sadies, singer/actor Maria Doyle Kennedy, Emm Gryner, Shakura S’Aida and others. There’s family-friendly programming, a songwriters’ circle and more. And (we assume) you can take it in while sitting on a Muskoka chair.

Taking place on a farm just outside of Meaford, Electric Eclectics is a festival unlike any other. Attendees are welcome to camp on the “funny farm” property, where they’ll experience adventurous sets from Sonic Youth’s Lee Ranaldo with Leah Singer, Alex Zhang Hungtai and Pierre Guerineau, Toronto’s own Lee Paradise, Cares + WHQB, Montreal’s Freelove Fenner and Hamilton’s bBomit. 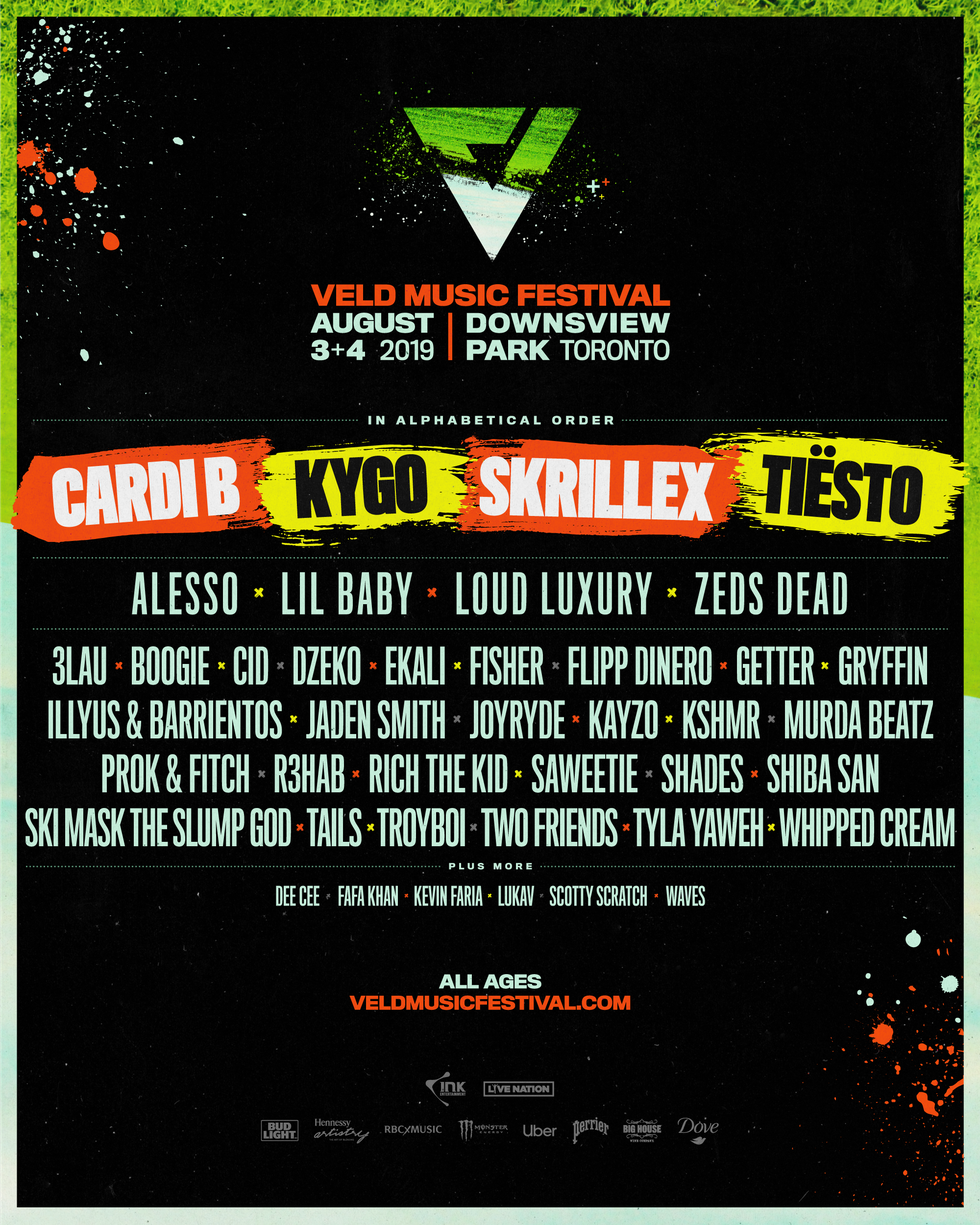 Grown well beyond its original role as a showcase for big stage electronic dance music, Veld is one of the largest music festivals in the city and province. Cardi B will be this year’s main draw to the open fields of Downsview Park, along with EDM acts like Kygo, Skrillex and Tiësto.

Sudbury hasn’t traditionally been a destination for arts and culture, but Up Here wants to change that. The urban art and music festival transforms the former industrial town visually and sonically over the course of a weekend, turning buildings into canvases with incredible mural art and sets from a range of musicians. This year features mutant wave pioneers ESG, Snotty Nose Rez Kids, Milk & Bone, Hubert Lenoir, Charlotte Cardin and Montreal-based punk phenoms Pale Lips.

Sure headliners Yung Tory and Karl Wolf are going to have their draws, but the biggest incentive to check out T Dot Fest is to take in the city’s most promising emerging hip-hop acts like Lil Berete, JRDN, LB Spiffy and more. 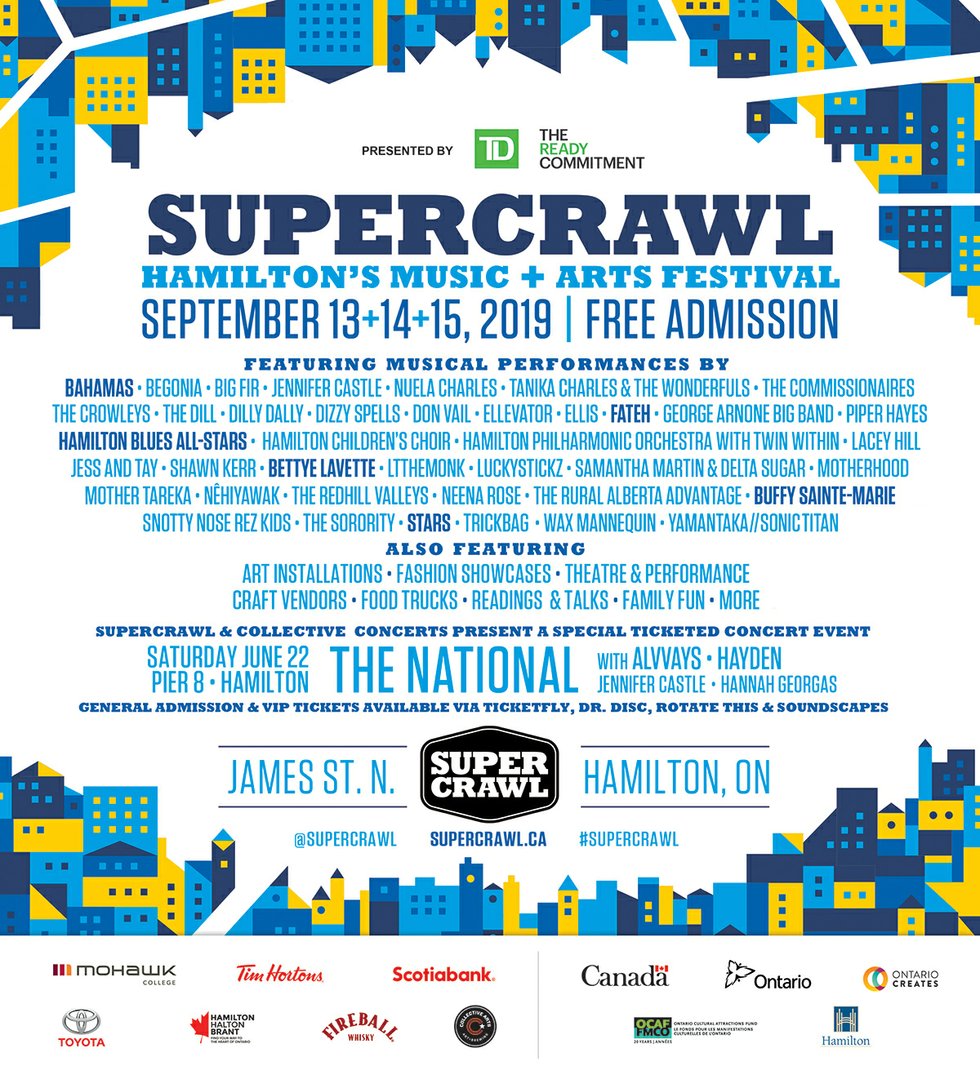 It’s always worth the drive (or bus ride) to Hamilton to check out this free street festival, which has grown from modest roots to get legends like Buffy Sainte-Marie and Bettye LaVette and indie stars like Stars and Bahamas. Other names that catch our eye this year: Jennifer Castle, Yamantaka // Sonic Titan, Begonia, Dilly Dally and much more.