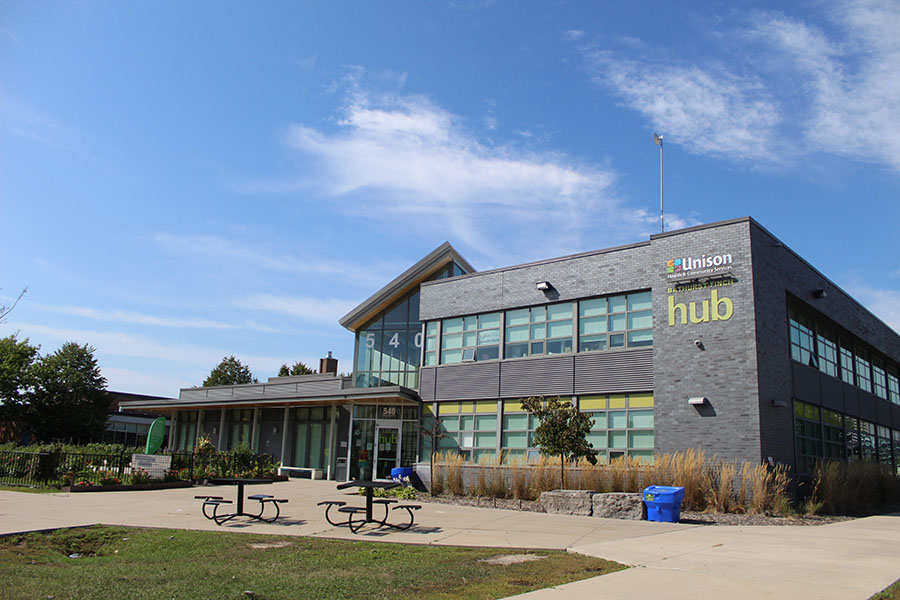 In July of 2017, the City of Toronto released TransformTO, its climate action plan. By 2050, the city aims to reduce our city-wide greenhouse gas emissions to net zero based on 1990 levels, as well as to have 100 per cent of buildings retrofitted, 75 per cent of all energy renewable, and 95 per cent of waste appropriately diverted. They’re significant goals, but in light of City Council’s unanimous declaration of a climate emergency last year, it’s clear that meeting them is dire. The Toronto Environmental Alliance (TEA) is collaborating with partners on a project that demonstrates Toronto’s community hubs can play an important role in building low-carbon neighbourhoods.

There are eight officially-designated Hubs in Toronto – and many other community organizations that function as hubs, from Rexdale in the west to Scarborough in the east. Many hubs are located in neighbourhoods facing high rates of poverty and marginalization. Typically run by a local non-profit agency, community hubs offer services such as health care, newcomer support for immigrants, senior and youth programming, and employment assistance. These hubs offer valuable resources for seeding local, climate-related projects such as staff support and convening space (in-person or virtual) for residents to develop their ideas and initiatives.

The hubs have also played a key role in COVID-19 response in their communities. Hubs have played a critical role in assessing and responding to local resident needs, delivering emergency food and supplies, organizing neighbour-to-neighbour support and mutual networks, and launching new online supports to help isolated residents. Toronto Environmental Alliance profiles more of the hubs’ role in the pandemic response in their new blog series. The Scarborough Cycles Hubs at AccessPoint on Danforth was able to provide their clients with emergency bike repair kits to maintain their bikes while many other bike shops were closed.

Several hubs in the city are using their locations to model climate-friendly practices. The Bathurst-Finch building in particular was custom built to house a rainwater cistern capable of holding 6,000 gallons of water that are then channeled into a community garden; it also features a roof built to host solar panels to generate energy. TEA is working with the Hub to raise funds to install rooftop solar. That said, other locations that don’t have the custom-built infrastructure or grounds are able to modify their interiors with green walls, such as inside the Rexdale and Mid-Scarborough hubs. The East Scarborough Storefront partnered with ERA Architects, Sustainable TO, Architext and other collaborators to design and build the Sky-o-SwaleTM, a unique shade-rainwater structure designed by youth from the community. Partnerships are crucial to the success of the projects; hubs benefit from collaborating with partners in technical, green and sustainable fields and vice versa.

“While projects such as renewable energy installations on hub grounds and building retrofits can achieve real reductions in greenhouse gas emissions,” reports a 2018 feasibility assessment conducted by the Toronto Environmental Alliance, the Toronto Community Benefits Network and Enviromentum, “They also have the potential to inspire and engage the residents visiting the hub.” Community engagement and building community have consistently been a clear goal of the hubs. Many projects undertaken by hub staff and local residents are modeling sustainability and showing how many priorities of community members connect to climate, such as food security. In several sites, communal gardens originally seeded by the hub staff are now run by residents, and the produce is provided to food banks in areas that have traditionally lacked access to fresh fruits and vegetables.

Moreover, the access to space for growing food can provide opportunities for newcomers and racialized people to apply skills and expertise, and develop intimate ties with local land. Programs that promote waste diversion practices, active transportation and green space engagement are also offered to community members.

The severity of climate change can feel overwhelming. Many residents – including racialized and newcomer communities, and people living in suburban neighbourhoods – are often left out of the discourse surrounding actionable ways to combat climate change. Grassroots mobilization is essential for sustainable progress that meets community needs. Community hubs are a key Toronto asset that can make a significant contribution towards TransformTO’s goals for a green 2050, and one of the best examples of how meaningful climate action can be centred on local priorities.