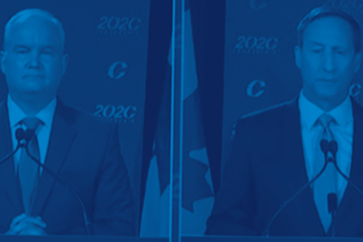 The bad blood between Erin O'Toole (left) and Pete MacKay has barely been below the surface during the Conservative Party leadership race.

For a while there, it looked like Peter MacKay was just not ready for prime time. But the Conservative Party of Canada leadership candidate seems to have found his footing.

If there were any doubts about who is the best person to lead the Conservatives into the next election, those have been put to rest after last week’s French and English-language leadership debates.

MacKay is clearly the most prime ministerial of the candidates – not to mention, the most in touch with mainstream, multi-ethnic Canada, which may not be saying much given just how thin the field is. But don’t tell that to Erin O’Toole.

MacKay’s only serious challenger seems intent on playing spoiler. If he can’t be leader, then he’d rather take the good ship lollipop down with him. They don’t call O’Toole Angry Erin for nothing.

On Friday, the O’Toole campaign called on the RCMP, OPP and Toronto police to investigate the alleged theft of “campaign data and strategy”  by the MacKay camp – namely, video conferences held by O’Toole with staff and Conservative party members. The MacKay campaign has dismissed the charges, suggesting that the O’Toole camp should check its own boat for leaks.

It’s been a chippy race. The bad blood between the two continues to bubble.

Such is the state of the Conservative party, which is looking more like it’s headed for a mutiny whoever wins the leadership than a recalibration following the Andrew Scheer experiment.

While MacKay has been pitching a more upbeat message of unity after starting the race playing to the party’s right flank, the truth remains that the party is more divided than ever along regional and political lines.

Most of MacKay’s support comes from Ontario and Quebec, his home base on the east coast and older members of the party caucus. Most of O’Toole’s support is concentrated in the west and newcomers in the caucus who tack right on the political spectrum.

O’Toole has cast himself as the “true blue” conservative in the race, whose “call to take back Canada” is clearly tailored to the anti-China, anti-UN, anti-climate action, meat-and-potatoes conservatives in the party.

Then there are the also-rans – the Trump-disciple Derek Sloan and social conservative Leslyn Lewis, the only woman and person of colour in the race whose positions on abortion, same-sex marriage and trans rights nevertheless symbolize all that’s wrong with the current incarnation of the party.

It’s a mess. MacKay’s problem is that while he seems to enjoy more overall support than O’Toole, it’s O’Toole who seems to be the preferred second choice of Sloan and/or Lewis supporters.

Last Thursday’s English-language debate provided a perfect microcosm of the dynamics at play.

The most pointed question of the night was by video from elementary school student Max, who asked the candidates why they want to be PM. Sloan went into a riff about a “resurgent China” and “cancel culture.” Only Lewis mentioned protecting the environment – and only in passing.

That question was followed by another doozy from someone named Jesus (not the guy from Nazareth, but from Ottawa) who wanted to know the candidates’ thoughts on systemic racism and how they would demonstrate leadership in that area.

The issue is an Achilles heel for the party, much like climate denial. Only MacKay and Lewis were willing to acknowledge that systemic racism exists.

MacKay recounted the “shame” of racism in his hometown of New Glasgow in Nova Scotia, which was made infamous by Viola Desmond when she was excluded from the local movie theatre in 1946.

MacKay said Canadians need to “make a real effort” to listen to those with lived experiences with racism as well as for the country to have “respectful discussions around policing.” Lewis pointed to residential schools and outcomes in the educational and justice systems as examples of systemic racism.

Sloan, whose own party members have labelled comments he made about Canada’s chief medical officer as “racist,” deflected attention towards Quebec’s ban on religious symbols in the public service, but otherwise defended Canada’s record on minority rights suggesting in a media scrum afterwards that, absent laws explicitly targeting identifiable groups, you can’t say there’s systemic racism in Canada.

O’Toole dodged, too, talking about a Canada where “merit, not the colour of someone’s skin” determines outcomes, and the need for reconciliation with Indigenous peoples to be tied to economic development. He refused to acknowledge systemic racism exists when he was asked point-blank by reporters later. One of his questioners noted that he supports mandatory minimum sentencing, but O’Toole defended that by saying it’s only for the most violent crimes.

O’Toole has spent most of this race trying to navigate the centre-right of the party and doesn’t want to alienate his base in Alberta. There, video of an encounter involving RCMP officers and Indigenous leader Allan Adam has raised questions about racism in the force and been a lightning rod for anti-Indigenous sentiment. O’Toole’s connection to the right-of-centre Canada Proud crowd in the party (O’Toole’s digital director Jeff Ballingall, is a founder of the group) has also been key to his campaign.

At the same time, O’Toole has cast himself as the candidate best positioned to win suburban seats in the multi-ethnic areas in the 905 around Toronto, where a number of recent fatal shootings involving police have pushed the issue of race into the forefront.

It’s where the party failed miserably under Scheer in the last election. And where the party is setting itself up for a repeat of that performance with anyone but MacKay at the helm when leadership ballots are counted at the end of August.