If Don Cherry is right to assume that more white people wear Remembrance Day poppies than immigrants or people of colour, then what does that say about the poppy? 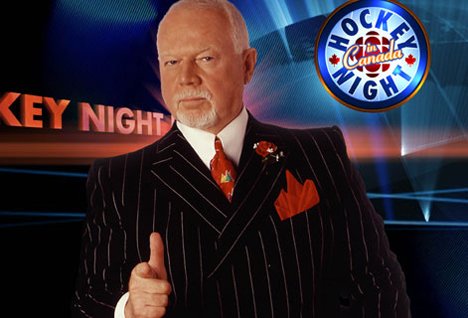 After being let go by Sportsnet on Monday afternoon, Don Cherry no longer has the biggest platform in Canadian sports television to spew his outdated racist and xenophobic rhetoric. Good job, Canada. We (finally) did it.

On the most recent Hockey Night in Canada, Cherry called out immigrants, or more specifically people of colour — who he referred to as “you people” — for not wearing poppies to honour Canada’s veterans.

People who took to social media in the controversy that followed made variations of the same point: Don Cherry is arrogant.

But the problem with Cherry’s comments isn’t only that what he said is wrong. It’s that he would assume that people of colour and immigrants should be expected to wear poppies in the first place.

This isn’t the first time Cherry has made racist and xenophobic remarks on air. We shouldn’t be surprised that an 85-year-old white guy whose only qualification is that he coached hockey entertains notions of patriotism, nationalism and war that are as outdated as the suits he wears.

But it’s time we start talking about the poppy, because we aren’t going to solve the systemic issues behind Cherry’s toxic ideology without first understanding the history people like him rely on.

When I heard about Cherry’s comments and the controversy that ensued, I couldn’t help but think about the historical significance we place on poppies. It’s very important that we remember all the veterans that sacrificed their lives for Canada. Nobody is suggesting anything to the contrary.

But there are other, more tangible ways to remember and give back. We need to question why old white men like Cherry are the ones endorsing the poppy.

Does the poppy benefit the people of colour who serve and die disproportionately for Canada and who have historically had the least help being reintroduced into Canadian society after serving and suffering the worst trauma? After all, the people that enjoy the most freedoms in Canada are the ones who look like Cherry.

Aside from Remembrance Day, the poppy also represents money. The money raised from buying poppies goes to support veterans, which is a point people like Cherry like to make when criticizing others for not buying them.

But it should not be up to citizens to provide financial support to veterans. It should be up to the government to ensure veterans not only have enough money to live comfortably but also the proper resources to be reintroduced to society.

If Cherry is right to assume more white people wear poppies than immigrants or people of colour, then what does that say about the poppy?

Modern wars exist to make money while pillaging non-white nations and spreading white supremacy. Even after all the sacrifices made, immigrants and people of colour still don’t enjoy the same freedoms in Canada as white people do.

Canada has also historically been complicit in allowing (and supporting) our neighbours to the south to step on whichever throats they want for whatever reason they make up.

If you want to wear the poppy, wear the poppy. If it helps you remember, fine, but we need to stop acting like wearing a poppy is going to make a significant difference to Canadian society.

Oren Weisfeld is a freelance journalist from Toronto who focuses on the intersection of sports and politics.