It’s the moment for Ford to lead, but his caucus and cabinet are divided as talk turns to imposing a curfew to stem the spread of the virus 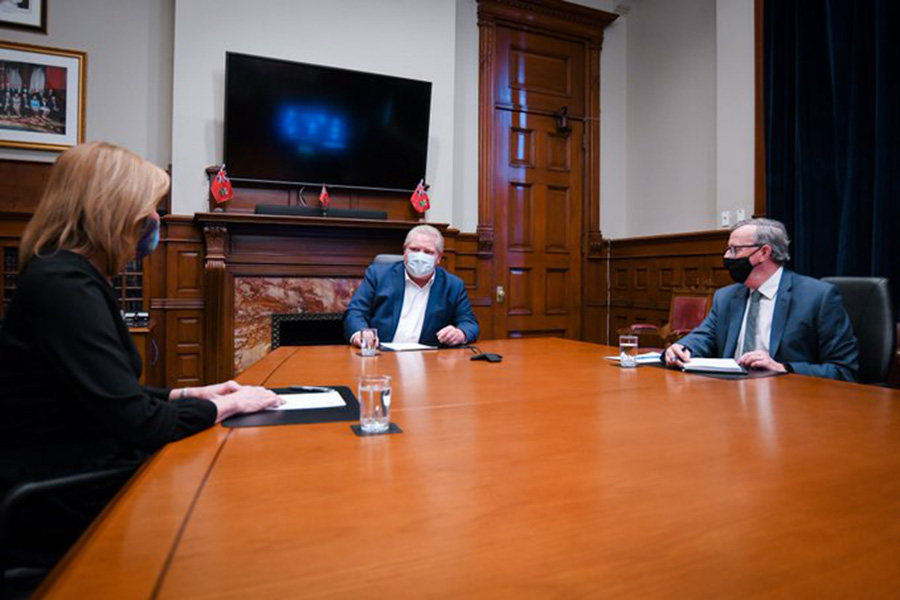 For months, Premier Doug Ford has been dancing on a volcano and now it’s about to go boom.

News out of Queen’s Park Monday morning was that the province is considering following the lead of Quebec and imposing a curfew to try and stem the tide of COVID cases now threatening to overwhelm the province’s hospitals.

But soon after news of “stricter lockdown measures” was confirmed by Premier Doug Ford to reporters, word came from unnamed government sources that those measures will not include a curfew “at this time.”

The mixed messaging on the coronavirus continues from Queen’s Park with deadly consequences.

The province’s death toll has surpassed the 5,000 mark and the number of active COVID-19 cases has eclipsed 30,000, with about half of those in the last month or so.

Ford, however, continues to try and dance around the problem responding with half-measures every time the virus burbles up to grab us by the throat.

It happened last time the province announced stricter lockdown measures a few short weeks ago. Ford waited five days to impose those restrictions until after Boxing Day, despite warnings that would lead to more cases. The outcome of that has been a surge in cases directly linked to holiday gatherings.

The premier says he’s been working with his caucus and cabinet “all weekend” etc… to decide its next moves. It’s been his go-to line every time the heat is on to do something more to stem the tide. It’s meant to give the impression that the premier and his team are hard at work figuring things out for Ontarians.

But it’s looking more and more like dithering – or is it that the Ford government is reluctant to take the medical advice of its health table?

Ford warned just the other day that “we’re in a crisis” and that the numbers are “scary.” Yet, it’s as if every move of the government is being dictated by public opinion polls – not to mention the mounting COVID deaths – instead of science.

Now a second wave of the coronavirus that’s been slowly building for weeks is picking up speed and is set to crash into Ontario. We’re told by the latest modelling that the number of new cases is expected to hit 6,000 a day and that hospital intensive care units will be swamped by mid-February.

But the Ford government has a bigger problem. People are tuning the premier out. The movement data from the holidays, as revealed by the Star this weekend, shows lousy compliance with government orders to stay home. Some one-third of Ontarians are not following COVID protocols.

At a press conference last week to announce another half-measure – a voluntary COVID testing program for international travellers at Pearson – Ford was asked by one reporter whether he’d lost the moral authority to lead on the coronavirus.

That was asked in the context of his decision not to fire his finance minister, Rod Phillips, immediately after Ford found out Phillips was vacationing in St. Barts despite the holiday lockdown. Ford rejected the notion, saying Phillips was ultimately asked to resign.

But the question still applies. Lest we forget that Ford himself has been caught on several occasions ignoring mask and social distancing protocols. His reluctance to force businesses to comply with lockdown measures has also had the effect of wearing away at public confidence, as evidenced by public opinion polls showing his declining approval numbers, especially as they relate to the slow rollout of vaccines.

It all adds up to a dangerous proposition – lose the trust of the people and you lose control.

It’s time for Ford to lead. But word on the street is that his caucus and cabinet are divided. And Ford’s minister of health Christine Elliott has been all but sidelined.

University of Toronto epidemiology professor David Fisman says the difficulty for the Ford government is that Ontarians seem to be ignoring pleas to comply when they need to most.

“What do you do if you tell your kid to do something and they say ‘Make me’? Either you decide it’s not worth the fight, or you use consequences. That’s what the premier has to deal with right now. Unfortunately, I think strategically they are going to spin this as ‘Welp, what can you do? We tried'”. For that, Ford must take the blame.