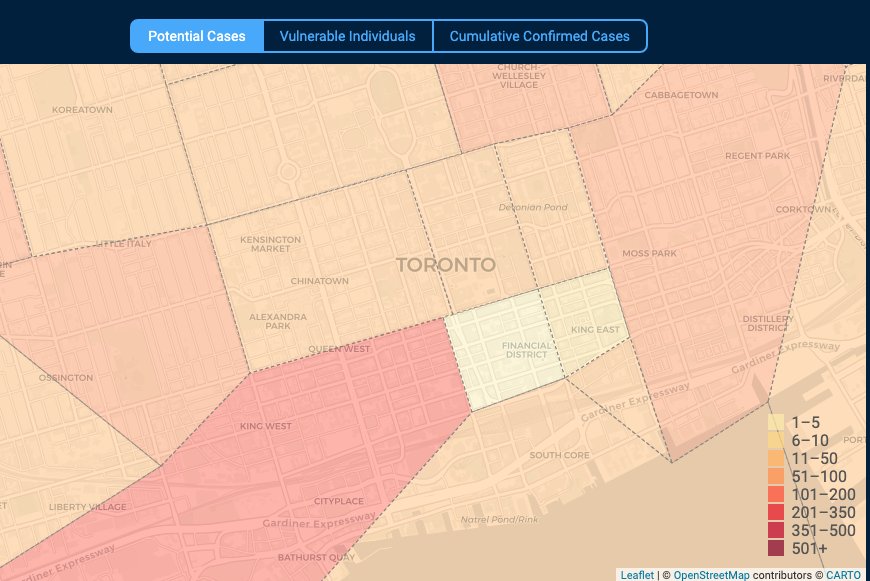 Flatten.ca maps potential COVID-19 cases in Toronto based on data voluntarily supplied by the public.

Comparing the number of COVID-19 cases in Toronto neighbourhoods might become a little easier.

University of Toronto student Shrey Jain and a group of peers have created an online tool called Flatten.ca to map the COVID-19 spread in Canada. They just need everyone to fill it out.

A survey at Flatten.ca asks respondents whether they have travelled recently or are experiencing symptoms associated with COVID-19. The answers are then applied to the map, which counts the potential cases in each area according to postal code. As of March 29, the M5V postal code had the most potential cases in the city, with 149 out of 2,547 respondents, according to the site.

“You’re seeing where people are filling it in,” Jain tells NOW. He admits the data isn’t accurate yet, with only 174,229 total respondents as of March 29. Jain and his colleagues are waiting on Canadians to share the tool widely, not just on social media but with their family members who may not have online access. “Everyone has to do it.”

The tool is currently subject to certain biases, since the elderly, young children and people who cannot afford internet access are unlikely to respond. Jain hopes that individuals can fill out the form for those in their family or close friends circle who can’t.

The students started working on Flatten.ca after they were forced to leave their U of T residence as social distancing measures took hold in the city. Their team includes undergrad students, public health researchers and computer scientists and has backing from Google.

Computer scientist Geoffrey Hinton, a leader in the field of artificial intelligence, and global public health researcher Shafi Bhuiyan have both promoted the site on Twitter.

The students plan to develop the tool so that they can project which areas will require the most medical attention. Other countries have shown interest in Flatten.ca, but at the moment the group is focused on making the experiment work in Canada.

“Once we get more reports in [all] regions, we’re going to be able to understand which hospitals might be experiencing a greater influx of patients potentially,” says Jain. When the project reaches its full potential, Flatten.ca will project how many people will be infected in certain areas and allow hospital networks to shift their resources accordingly.

As of Saturday, Canada had 5,596 confirmed COVID-19 cases, with 1,144 in Ontario. Another 8,690 cases are under investigation in Ontario and 19 people have died from COVID-19 related causes.