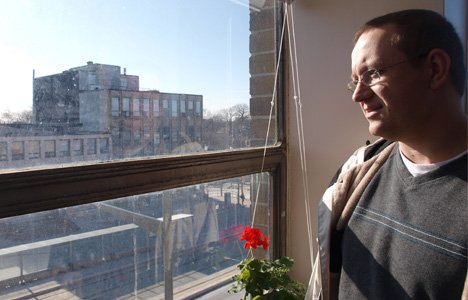 Lehel Ilyés inspects a new For Sale sign attached to the exterior of the Hungarian House on St. Clair Avenue near Dufferin Street. It went up the day before.

The youth leader knows the house has become an albatross around the neck of a Hungarian community that’s struggling to promote their culture.

“The community should be thriving,” he says. “You’ve got 60,000 members [of the Hungarian community in Toronto] and you have events with only 20 people. People aren’t coming. They don’t care.”

He hopes they can catch a break thanks to recent gentrification in the area brought on by council’s plan to develop city “avenues” and expand rail transit.

As funds from membership dues decrease as the older generations slowly die off and renovation costs reach into the six digits each year, they desperately need the cash from the sale of the valuable land, he says.

Ilyés hopes the selling the Hungarian House, currently listed at $5.7 million, will breathe new life into their community.

“It’s going to be quite the ritzy area,” Ilyés says, imagines a fancy new building sprouting — somewhere between seven and 10 stories up — from the concrete steps he stands on.

“There’s gonna be a condo here for sure,” he’s convinced. “It’s just a matter of how high.”

The banquet hall holds hundreds of people, but attendees often have difficulties finding parking in the area, he says.

Recently a leaky roof damaged a number of books in the library, and windows need to be repaired.

Add to that the black mark left by a shooting death at the house during a dance competition held by an external party in 2007, and you have a perfect storm.

Yet despite the trauma of recent hardships, redevelopment along St. Clair West has increased the value of the property dramatically.

He hopes it will provide the cultural centre with the cash they so desperately need to start over in a new location.

The 50,000 sq. ft. building was listed at $5.7 million on January 11. Observers say whatever happens to the property, it will be emblematic of the possibilities emerging from the City’s Avenue Study for the area, and the effects of the TTC Transit City plan.

“This is a hot area,” says Ward 21 councillor Joe Mihevc. “It means property values are higher and (landlords) are raising rents.”

Because the Avenue Study promotes intesification — up to a point — in mid-rise zones, he says the Hungarian community stands profit, especially since their own focus is shifting.

“The younger generation live in the suburbs,” he says. “For the Hungarian community, it’s a chance to renew.”

Arany János Hungarian School dance teacher Nagy Beatrix leads a traditional Hat Dance — a musical chairs type game where the student who ends up with no hat after each round is knocked out. Photo courtesy of Kinga Székely Flynn

Turns out, as a rule Hungarians love assimilating into Western society. Over the years Hungary itself even developed a bit of a reputation as nation of shopaholics (relative to other Eastern European countries, at least)

DTZ Barnicke, the real estate company selling the property, doesn’t expect much interest from mainstream developers, but suggests an office building, retirement home, medical building or even a parking lot might be appropriate for the space.

The company notes section 27 of the Avenue Study can allow construction of 10 story buildings in mid-rise zones, provided some sort of social service is provided and maintained alongside. Naturally, broker Ernest Kockeritz says he also markets daycare facilities.

The study recommends 3,445 spaces are needed in the area to ensure 50 per cent of children up to nine years of age in the area have access to daycare. Right now there are 1,504 spaces — only 31 per cent.

Mihevc says he would steer developers away from building a parking lot, saying there is not enough of a traffic draw in the region.

He says it’s “highly unlikely” the City would allow rule-bending 10 story construction in the area, since the Avenue Study is so new.

And on daycare spaces? “We’re close,” he says.

The Hungarian cultural centre isn’t being pushed out by gentrification, so much as they are trying to profit from it. Staff hope a new home will help them reconnect their community.

Hungarian-Canadians once maintained a bustling midtown community in Toronto. But too often as the younger generation moved out, they left their roots behind them.

“We’re not a group of people that stick together well,” says Tony Kez, vice president of the Hungarian-Canadian Chamber of Commerce. “Here you have islands of Hungarians all over the place.”

The chamber of commerce is even looking to the motherland for a boost, hoping the Hungarian government will leverage funds to help Hungarian businesses set up shop in Canada.

Efforts to export similar Canadian businesses to Hungary have not done well, due to lack of organization and interest, he says.

“When I look at it, it’s really disparate,” he says.

Ilyés (who goes by Leo, instead of Lehel, “to make it easier for people here”) and other staff at the Hungarian House — the largest cultural centre outside of Hungary — have been looking for ways to ignite the younger generation with a love of their culture.

He holds weekly youth nights called H² (which stands for Hungarian House), and recently screened a film that included a cameo from popular Hungarian heavy metal band Tankcsapda. “We’re trying to hype it up,” he says.

“We’re desperately trying to rejuvenate,” says Emoke Jordan, a director at the Hungarian House, reflecting over the city from her North York condo. “We are at a junction of our existence.”

For any community, the need to retain elements of heritage is profound, she says. Having worked in the back rooms of the Ontario government for 10 years watching modern immigration policy emerge, she knows the provincial mixing bowl can have a wide variety of consequences for different communities.

“Most of the immigrants to this country are political immigrants,” she says. “They worked hard to achieve what they have achieved.”

Her brother was a “56er” — part of the wave of immigration from Hungary that followed a failed revolution against a brutal communist regime in 1956.

The large banquet hall features a replica of the crown of St. Stephen, the first king of Hungary.

Her brother was a student at the agricultural college in a border town with Austria in late October 1956.

He joined an unarmed protest against the secret police (called the A.V.H.) in Magyaróvár at the height of the revolution. They wanted to remove the red star from the A.V.H. headquarters.

But as they proceeded down the cul-de-sac he caught a flash of light from the side of the road, and hit the deck.

Suddenly, the secret police emerged from the bushes and opened fire with machine guns. Between 60 and 90 people were killed, including women and children.

Despite being caught with dogs twice, he managed to escape to Canada, settling in Hamilton.

It is this spirit of perseverance which is crucial to remember, Jordan says.

She spends her days helping to maintain traditions and tell the world just what it took to get the Hungarian community where they are today. She’s hoping the sale of the Hungarian House will be just the ticket to get them back on their feet.

“The value of the building is defined by the Avenue Study,” she says, but notes just how difficult construction along St. Clair West has been.

“If that means the value of the asset has increased then it means it was worth all the pain and suffering.”[rssbreak]