NOW MagazineNewsIts down to dollars

Its down to dollars

Will they or won't they? The world clock is ticking. The final result of the COP negotiations are now in. 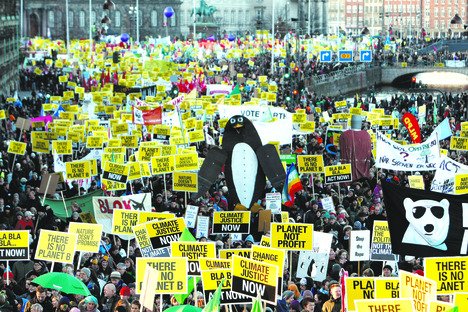 Will they or won’t they? The world clock is ticking. The final result of the COP negotiations are now in the hands of the heads of state who are literally choking Copenhagen’s airport runways as they gather over these final hours.

Of course, this is just one of the many ironies in this 11th-hour crunch time. But one thing is certain: no matter the final agreement, the touchy subject of money will continue to be the hot topic over the next year and beyond.

With the weight of civil society and COP’s leaders, Yvo de Boer and Connie Hedegaard, solidly behind them, all of the developing world has made funds for “adaptation” (a UN buzzword) a huge test of the deal struck here tomorrow (or Saturday, if they go into overtime). But the sums being cited are daunting. The EU estimates that $100 billion euros (154 billion Cdn.) every year will be needed for this project from 2020 on.

How much can the developed world actually be expected to deliver to developing countries to help them adapt to the worst realities of climate change and grow economically in a low-carbon world?

Well, of course, if all that dough had to come from stimulus-stretched current tax revenues, we would all be sunk in climate disaster.

For the short term, the start-up cash, which looks like it will amount to about $10 billion annually for the next three years, will be raised in the traditional way. The idea is that contributions will be divvied up on a proportional basis among the industrialized countries.

But those dollars are just loose change compared to what’s actually needed. For the real money, new alternative financing will have to come into play, and these new funding approaches are set to take centre stage in the continuing climate-change talks through 2010.

So here’s a little primer to get us all started.

There’s lots of potential good news, in fact. The G-20 in Pittsburgh a few months back already committed to a little thing called ending oil and gas subsidies “in the medium term,” and if they actually get with it and act on that plan, it will generate serious dollars.

No definitive study has yet pinned a number on all the various subsidies now enjoyed by the sector, but in his former life, Jonathan Pershing, currently the lead U.S. climate negotiator, authored a study that cited $57 billion annually in developed country (OECD) subsidies.

The G-20 pegs the subsidy total at as much as $300 billion, so the number is big. We just don’t know how big yet. But we do know that eliminating the giveaways will lead to an estimated 10 per cent reduction in greenhouse gases by 2050.

Wow, that’s pretty nearly a no-brainer. No wonder the G-20 went for the idea, but how long will they take to turn it into action?

And there’s more pretty easy money on the table in the form of international shipping and aviation. Here’s a high-carbon industry with growing, worrisome emissions that is obviously ripe for a carbon levy or cap.

Agreeing on a global approach would keep the playing field level for the competitive industries involved and reduce the sector’s carbon footprint at the same time. And it’s a perfect stash to channel to the developing world, because the revenue belongs to no one country. Estimated yearly gross by 2020? About $25 to $37 bil.

Hey, we’re getting there, and we haven’t even started to talk about cap-and-trade and the various ways that some of the funds from auctioning credits could flow to the developing world.

I predict that the fine points on this subject will go from impenetrable at the moment to old hat over the coming year – sort of like the 2010 version of the way we all figured out what the sub-prime mortgage crisis meant last year, only not as painful.

But perhaps most exciting of the new mechanisms on the table is the increasing talk of imposing a levy on global financial transactions.

Years ago, this was called the Tobin tax and it was laughed off the table. But France and the UK came into the summit talking this one up now that the financial sector has shown itself to be such a leech on the public purse. Surely, if we are all on the hook for their problems, as we clearly are, it makes sense that they start contributing their fair share.

At first it seemed like a casual pie- in-the-sky kind of idea hitting the talks too late in the game to get picked up. But as I write this, it looks like the financial transaction tax is an idea with growing traction.

An intriguing joint statement has just reached my desk. “France and Ethiopia, representing Africa, believe that various innovative financing mechanisms are key to ensure the predictability and sustainability of international public efforts,” it says.

While many NGOs are infuriated by the statement, saying its targets are weak and funding calls dangerously insufficient, it nevertheless calls for “the creation of a tax on international financial transactions.”

So watch this one closely, because it’s coming home really soon. In fact, expect this tantalizing possibility to be on Toronto’s plate in January – because the statement goes on to say, “A high-level group composed of developed and developing countries’ experts will bring forward recommendations, with a preliminary report to be presented no later than the next G-20 Summit in Canada.”

Now, who would have predicted an outcome like that from Copenhagen?