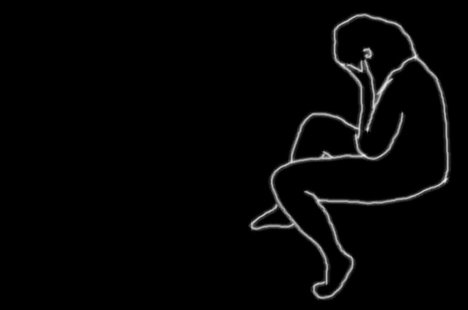 Spoken word got a major boost when poet Shane Koyczan performed during the Olympics opening ceremonies.

For those in the slam poetry scene, Koyczan is a legend. He was last here in 2009 when he sold out the Drake Underground with a show featuring some memorable lyrics. But the wider public got their first glimpse of this poetic superstar from Penticton, B.C., in these Olympics.

The IOC won’t allow any of their content to be copied onto YouTube, but there’s a new Koyczan work online I highly recommend. One of his poems has been set to black-and-white animation, and it’s the kind of collab artists only dream of – animator Cecilia Velasco from Vancouver draws Koyczan’s imagery in a poem called Swiftly, about dreaming of being a Siamese twin with your lover.

According to the video description, “Swiftly was completed in two weeks through a mixture of rotoscoping and hand drawn animation. It has been well received in animation festivals, and was selected for the Canadian Showcase at the Ottawa International Animation Festival 2009.”

Velasco has played with language before, especially in her Vimeo vid Bushism.

And if you have recently been introduced to Koyczan and spoken word, dive deeper into YouTube to check out his live performances, both solo and with his band The Short Story Long. Better yet, support the artist by buying his iTunes albums.

This guy is our Gretzky of spoken word, a class-act poet putting Canada on the map of performance poetry.