Ontario’s cannabis lottery: the deck is stacked in favour of big money 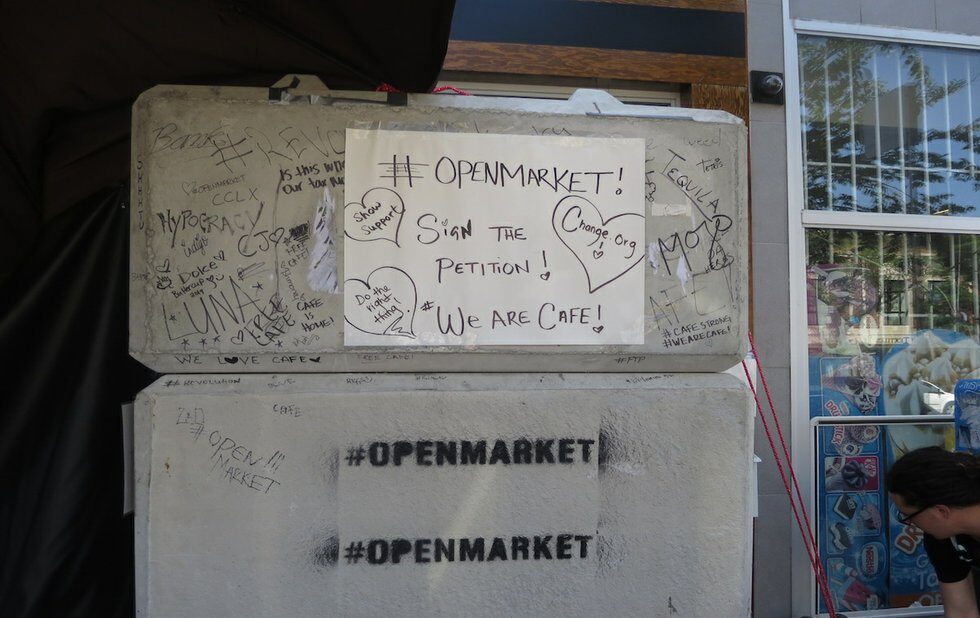 Concrete barriers in front of one of four unlicensed CAFE locations at the centre of a highly-publicized standoff with police and city officials.

Ontario announced the winners of its cannabis lottery for retail licences on Wednesday (August 21).

After a sleepless night for many applicants expecting the results to be announced before sunrise, the province’s Alcohol and Gaming Commission (AGCO) released the names of the 42 lucky winners just after 10 am.

Some 5,000 expressions of interest were submitted for licenses to open retail pot shops with more than 4,800 making the final draw. But a number of revelations surrounding some of the winners have led to questions about loopholes in the process.

Turns out one of them, a numbered company (11180673 Canada Inc.) owned by film producer and director Rob Heydon, has proposed opening up a shop on Harbord at the location currently occupied by CAFE (Cannabis and Fine Edibles). That’s the unlicensed dispensary at the centre of a highly-publicized battle to stay open ever since police and city officials blocked its doors with concrete barriers. CAFE has continued to operate on the sidewalk outside its four locations. Heydon, however, claims to have zero affiliation with CAFE.

In Sudbury, the HighLife retail cannabis outlet, which runs one location, was promoting the opening of several new stores on its website even before the lottery winners were announced.

Applicants were required to provide $250,000 in cash and a $50,000 letter of credit to get in on the lottery action. More than 180 individuals submitted multiple applications for some 15 addresses connected to HighLife. Six of those applications were successful, which would make them the largest retail chain in the province if approved by the AGCO after the next evaluation phase.

HighLife’s existing location has received multiple fines from the AGCO for non-compliance. From advertising its services on highway billboards, to offering inducements, HighLife has made a name for itself among customers in northern Ontario, who will travel many kilometres to visit the cannabis retail store.

Meanwhile, the son of the co-founder of cannabis licence holder Aphria, which is still trying to shake off accusations of engaging in an international shell game to inflate its stock price, is reportedly also among the lucky winners. As is the wife of legal counsel for the AGCO.

Also, the AGCO announced three winners in Innisfil all of whom proposed locations steps away from each other on the same street.

There are some big lottery wins to celebrate. The Friendly Stranger, the longtime Queen West cannabis culture shop, will be opening several stores. But other longtime local players like Hotbox Cafe, which entered both lotteries, continue to be left out of the legal cannabis marketplace.

Lisa Campbell is CEO of Lifford Cannabis Solutions and co-chair of the Cannabis Beverage Producers Alliance.