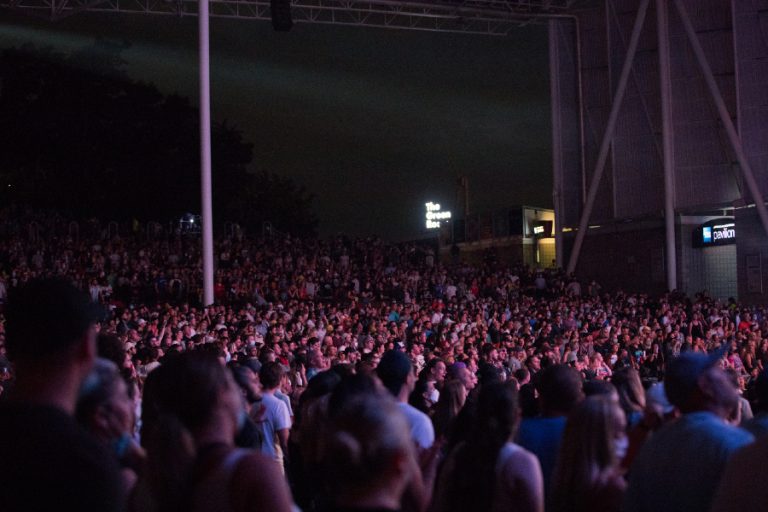 Concert venues, theatres, sports venues and cinemas will be allowed to operate at 100 per cent capacity starting on Saturday.

On Friday, the province said in a press release that there have been limited COVID-19 outbreaks in those settings and that public health and health-care indicators province-wide remain “stable.”

The rule change applies to select indoor and outdoor venues where proof of vaccination is required. Horse-racing tracks, commercial film and TV sets with studio audiences, meeting and event spaces and spectator areas in sports and fitness facilities (but not gyms) are also allowed to operate at full capacity.

As such, two-metres of physical distancing requirements are also being removed “with limited exceptions,” the province said.

Health minister Christine Elliott said the government is “cautiously” lifting capacity limits in “select settings where we know proof of vaccination requirements are providing an added layer of protection to Ontarians.”

Effective at 12:01 am on October 9, the following businesses can operate at 100 per cent capacity:

Concert venues like The Garrison have been operating at 50 per cent capacity.

A “big win” for the Raptors but not club gigs

Concert promoters have been selling tickets at 100 per cent capacity for upcoming shows despite Ontario only allowing those venues to operate at 50 per cent.

As a result, big international artists have either skipped Toronto or cancelled and postponed shows. Others have moved from indoor to outdoor venues, such as the Jungle concert at CityView Drive-In this Tuesday.

So if you have concert tickets, is your event still happening? It depends whether or not the event is seated, venue owners told NOW.

Erin Benjamin, president and CEO of the Canadian Live Music Association, said in an email that the full capacity rule that takes effect on October 9 does not apply to standing-room – or general admission – shows.

That means seated venues like Massey Hall, Scotiabank Arena, Meridian Hall and Queen Elizabeth Theatre can operate at 100 per cent capacity, but general-admission clubs like the Garrison and the Horseshoe will still have limits.

“All shows must be seated,” she said. “However, there will no longer be a requirement to socially distance any seating.”

In an email to NOW, Garrison owner Shaun Bowring said the change increases the number of patrons he can welcome back only slightly.

“Not anywhere near 100 per cent capacity would be possible seated,” Bowring said. “Basically this is a big win for the Leafs and Raptors.”

Jeff Cohen, who runs the Horseshoe and Lee’s Palace, wrote in an email that even if his venues filled up with theatre-style seats, “by the time you make aisles and leave room for fire exits and the washrooms, we can only get maybe 43 per cent [capacity].

“So we have to contact every artist we booked and see if they are willing to play at a seated 43 per cent cap,” he added. “If not, they either cancel or postpone or go to a larger venue.”

NOW has reached out to the ministry of health to confirm whether the new capacity rules apply to both seated and standing-room concerts.

Meanwhile, Toronto Raptors and Toronto Maple Leafs will now be allowed to play to full houses at Scotiabank Arena, the teams’ owner said in a statement.

“Throughout the process of re-opening our venues to fans, which included working closely with the province over many months, health and safety has been our shared top priority and we are overjoyed to see this day arrive when we are able to welcome a full venue to cheer on the Maple Leafs and Raptors,” said MLSE CEO Michael Friisdahl in a statement. “We recognize there will continue to be much work to do together to ensure the safest environment possible for every event attendee and our community.”

The Ford government is also lifting limits on outdoor settings that have a capacity below 20,000, but proof of vaccination will still be required.

“This gradual and incremental approach will continue to help protect people and ensure the province continues to cautiously lift public health measures safely,” a statement reads.

To date, nearly 87 per cent of eligible Ontarians age 12 and up have had one shot of COVID-19 vaccine and nearly 82 per cent are fully vaccinated.

The majority of new COVID-19 cases continue to be among unvaccinated people, public health officials said.

Beginning on October 13, wedding and funeral services held in meeting or events spaces will require proof of vaccination or a medical exemption.

October 8, 2021 (6 pm): This story has been updated with quotes from the owners of the Horseshoe, the Garrison and the CEO of the Canadian Live Music Association.