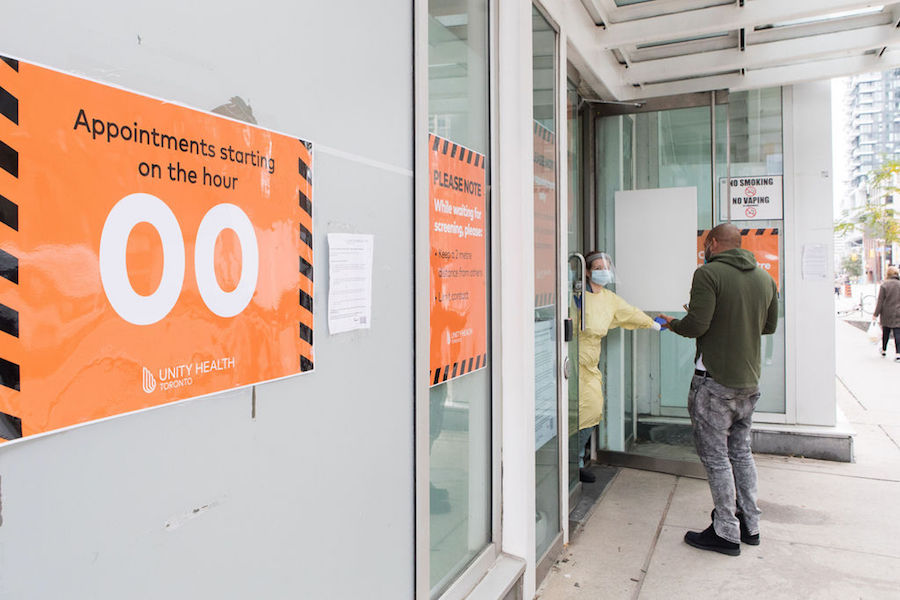 Ontario reported 896 cases of COVID-19 and nine more deaths on October 30, a drop over the previous day.

Testing has risen over the previous day and is closer to the province-wide capacity of 50,000 per day.

Labs in the province completed 41,008 tests and another 41,063 tests remain under investigation. The positivity rate is 2.2 per cent.

More than two-thirds of today’s new infections are in the Greater Toronto Area.

“Locally, there are 314 new cases in Toronto, 173 in Peel, 115 in York Region and 92 in Ottawa,” Health Minister Christine Elliott said on Twitter. “There are 796 more resolved cases.”

There are now 7,669 active cases of the virus in the province.

There are 314 patients in hospital, with 75 in intensive care and 52 on ventilators.

On Thursday, provincial public health officials presented COVID-19 modelling data that laid out three potential scenarios for the weeks ahead.

Despite the recent rise in new infections, the projections suggest the epidemic will slow down across all public health indicators, including hospitalizations.

The best case scenario predicts daily COVID-19 case growth will drop to around 800 per day and stay there through November. The worst-case sees cases rising to 1,000 to 1,200 per day.

Toronto reported a record 447 new cases on October 29. However, the city’s medical officer of health clarified that part of that count includes delayed data reporting.

“In this instance the figure is not a single day or record high,” Eileen de Villa said in a statement sent out late Thursday. “The highest recent figure remains 374 confirmed cases on October 26, 2020.

“Today’s case count figure is the result of an unusually high amount of data being input after staff illnesses and deployment of other staff for training on the new provincial software system for case and contact management,” she added. “This batching of data entry accounts for approximately 100 cases, which, if not included, would have been consistent with the level of recent case counts, in the low to mid-300 range.”

De Villa expects to see similar impacts on daily case counts as the software system is implemented. She also said there is reason to believe the city will see a decline in virus spread due to the 28-day modified Stage 2 restrictions Ontario implemented on October 9.