NOW MagazineNewsProtests escalate over RCMP raids against pipeline actions in BC

Protests escalate over RCMP raids against pipeline actions in BC 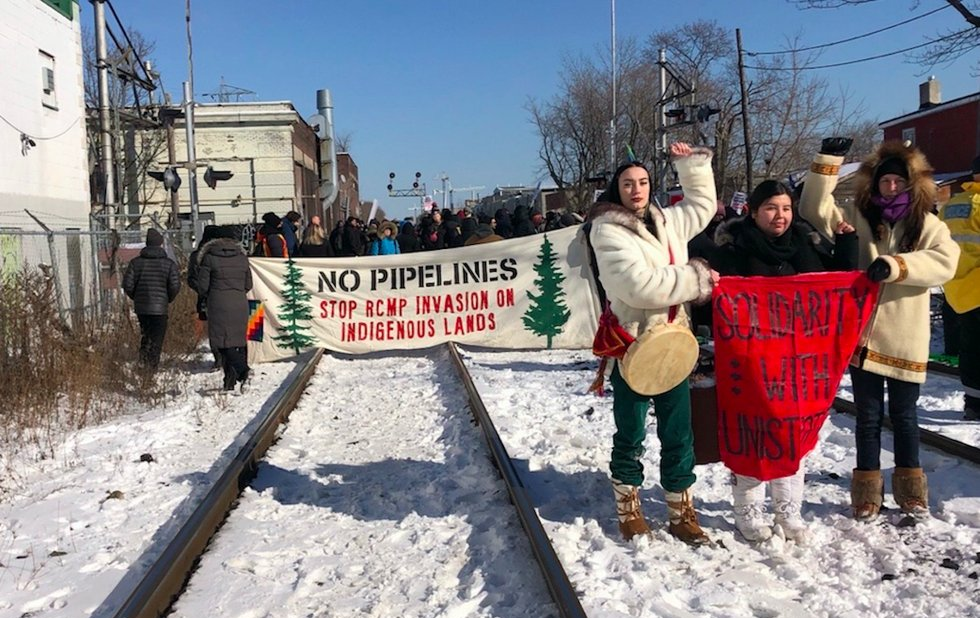 Protestors are occupying the Toronto constituency office of Minister of Crown-Indigenous Relations Carolyn Bennett. The demonstrators are demanding Bennett order the RCMP out of Wet’suwet’en territory in northern BC where the RCMP carried out a raid on a checkpoint on Thursday to clear the way for continued construction of the Coastal GasLink (CGL) natural gas pipeline.

Some 24 tactical teams descended from helicopters followed by a bulldozer and dozens of RCMP vehicles during the raid which was a repeat of actions that took place last year in what has been a decade-long effort by the Wet’suwet’en to block construction of a number of pipelines. It was recently reported by The Guardian that the RCMP had authorization to use lethal force against the camp during their raid last year. Back then, the Wet’suwet’en appealed a court injunction ordering them out. The appeal has since been denied clearing the way for RCMP actions which have sparked protests across the country.

On Saturday, demonstrators blocked a number of CN freight lines, including in Toronto.

Two days prior to the RCMP raid on the Wet’suwet’en, the Federal Court of Appeal ruled against four First Nations and upheld Ottawa’s approval of the Trans Mountain pipeline, another project that has been facing widespread opposition from First Nations.

Whether by militarized force or the courts, it has been a week of forcing Indigenous nations into accepting unwanted resource projects on their territories.

Despite Trans Mountain’s success in the courts, the company also announced last week that the estimated cost of its pipeline project has increased by $5.1 billion. That brings the estimated cost of the project to $12.6 billion. This does not include the $4.5 billion that the federal government spent to buy the pipeline from its previous owner, Kinder Morgan, less than two years ago.

The federal government chose to buy the pipeline from its previous owner, Kinder Morgan, amid legal resistance from First Nations communities and the BC government. The federal court initially sided with First Nations over a lack of consultations on the part of the government and failing to consider the potential environmental impacts of the increase in tanker traffic in the Salish Sea, which would increase from five to as many as 34 tankers per month.

The ruling sent the federal government back to the consultation table. But the outcome seemed predetermined – construction started on Trans Mountain in 2019 despite the court ruling in favour of First Nations.

Similarly, as the Wet’suwet’en Hereditary Chiefs engaged in what were described by federal officials as “de-escalation talks” last week, the RCMP was ramping up their presence in the area, preparing for the raid that would eventually take place when talks collapsed.

Tsleil-Waututh First Nation, who inhabit the area along the coast of the Salish Sea, say they are now considering a Supreme Court challenge. Meanwhile, on Monday the Wet’suwet’en Hereditary Chiefs launched another legal challenge to the CGL project. All five clans of the Wet’suwet’en support the legal action calling for a judicial review of an extension of the project granted by the BC government last October.

Canada’s top court acknowledged in 1997 in Delgamuukw-Gisdaywa v. The Queen that the Wet’suwet’en people, represented by their Hereditary Chiefs, never ceded title to the 22,000-square-kilometres of territory in northern BC.

Recently over three dozen lawyers, legal experts, and law professors signed an open letter supporting the Wet’suwet’en Hereditary leadership, asserting that its struggle against Coastal Gas Link “goes to the core of the relationship between the Crown and Indigenous Peoples and the obligations that arise therefrom.”

The Tsleil-Waututh Nation also remains committed to their resistance to Trans Mountain.

“We always said that we’d do what it takes to stop this pipeline,” says Rueben George, of the Tsleil-Waututh Nation.

Sakura Saunders is a member of Solidarity with Alton Gas Resistance (SWAGR).