Bonnie Briggs died suddenly at the age of 64 at home with her husband, Kerry, in their Parkdale apartment. She was watching Jeopardy.

It was a rare evening that Bonnie could be found at home. She was constantly on the go. One of her last Facebook posts was typical Bonnie, signing off with her trademark, “Ok, let’s talk.”

“I’m up now on an early morning in South Parkdale. Today, I have to go to work, then to the drop-in for lunch. I also have an Ambassadors’ event and two meetings at the drop-in. Ok, let’s talk. Bonnie”

Bonnie was a beloved activist who devoted her time and energy to an enormous array of groups: the Ontario Coalition Against Poverty, the Toronto Disaster Relief Committee, the ODSP Action Coalition, Parkdale NDP, United Tenants of Ontario and ACORN. As if that wasn’t enough, she started a Tiny Houses Committee. She was a PARC ambassador and more. When I announced her death on Facebook I had to update this list. It’s still not complete.

Bonnie also had an artistic side. She was a published author, a poet and drummer. Members of Samba Elégua describe her as a fierce samba warrior known for her Kraft Dinner box percussion and being particular about her shakers. She was also a loyal fan of the bluegrass-country-punk-rock group Jughead and loved to dance.

I met Bonnie and Kerry over 30 years ago at the Christian Resource Centre drop-in in Regent Park. They had been homeless several times and over the years, I got to know them through their combined activism. In fact the opening lines in my chapter about them in my book Dying For A Home: Homeless Activists Speak Out are:

“They’re just always there. Or at least one of them – Bonnie or Kerre. At every single meeting, rally, demonstration, fundraiser, memorial or conference that has anything to do with homelessness or housing – they are there.”

I asked Kerry this week how they did it. He told me, “We did what needed to be done. A challenge or problem won’t go away until you make up your mind to face it.”

For both of them, that problem was affordable housing and Bonnie especially hated that so many people were dying homeless. 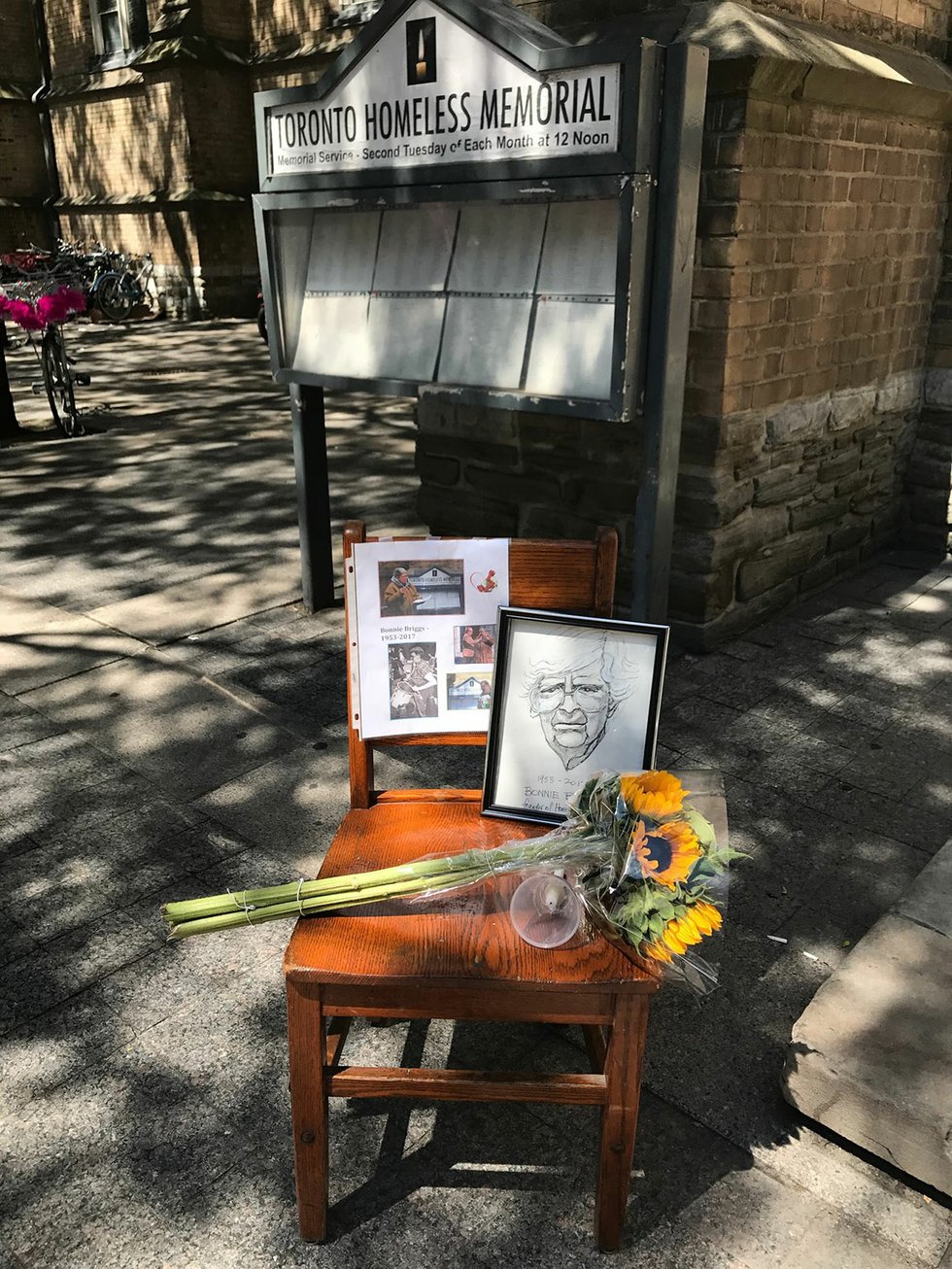 In the early 1990s, Bonnie got the idea for the Toronto Homeless Memorial when she saw that Toronto had memorials for victims of war, firefighters and other workers who had died on the job. She asked, “Why isn’t there a memorial for homeless people?”

While a student in the Community Worker Program at George Brown College, she tackled this project pulling in support from architects and even then mayor Barbara Hall. Bonnie’s dream was for a memorial structure at City Hall but that was nixed when bureaucrats told her there was a moratorium on new memorials there. Then she set her eyes on St. James Park and wrote the poem We Are You, describing her vision for it. However, Kyle Rae, the local councillor at the time, would not support it. Fortunately the Church of the Holy Trinity, ironically situated between City Hall and the richness of the Eaton Centre, offered space and set up a simple glass case for the names, now totalling 890.

Since 2000 Bonnie attended every monthly memorial, nearly always reading a poem she wrote with the priest. Most recently that priest was Sherman Hesselgrave, who told me there must be 70 poems. Bonnie still wanted a real memorial and was part of a working group to build a permanent and beautiful homeless memorial in Trinity Square.

While Bonnie lived a very public life of poverty, it was rich with a wide network of friends. She didn’t compartmentalize her activism from her personal life. At the memorial she would often tell the crowd it was her birthday or her wedding anniversary or that she and Kerry were now celebrating 20 years housed. Sometimes she would share a personal injustice, such as when she was denied Ontario Disability (three times) or Wheel-Trans. For all who knew Bonnie and saw her struggling with the bundle buggy she used for support, this latter rejection was too much. Bonnie appealed, and when she won we were victorious with her.

There likely will be a moment of silence for Bonnie at the next city council meeting. But that body should hang their head in shame for their inaction. Despite voting twice (2003 and 2013) that shelters should not pass 90 per cent capacity, the city has never once met that target across the board.

For years the chilling evidence provided by experienced workers to city hall committees that people’s lives are at risk has been ignored. The 2016 OCAP report, Out In The Cold. The Crisis In Today’s Shelter System, which added to this documentation and made specific recommendations was also ignored. Mayor John Tory has also ignored the 17,000 signatories on my petition calling for him to ask the federal government for use of a federal armoury for emergency shelter. He also ignored a similar plea from Social Planning Toronto in a letter signed by over 30 organizations.

This past winter I engaged with both the city manager’s office and the city ombudsman, who examined the shelter emergency with a narrow lens, only looking at cold weather supports – as if people were magically housed or found shelter in May.

To add insult to injury, or should I say death to injury, the city, now compelled by public opinion to track homeless deaths, is unwilling to share their full data until 2018. To the city, homeless people are only numbers. The first six months of tracking showed 46 people had died. That’s approximately two deaths per week and more than the city statistics on homicides or traffic deaths. The average age at death was 50 – that’s 30 years younger than the Canadian average. What the city refuses to disclose is the information on gender, Indigenous status, medical causes of death, number of suicides or overdoses and location of death. How is that even moral?

I saw a condolence repeated over and over for Bonnie. It was “Rest in power.”

Bonnie will, but her life is a reminder to us that we must not rest.

A memorial for her life will be held Sunday, September 10 from 2 to 4 pm at the Church of the Holy Trinity in Trinity Square.

Homeless Memorial, “We Are You”

The homeless are people too.

The homeless die, who remembers?

That Society has lost some of its members?

We have a monument to remember and show,

What Society needs to know.

The reality of life on the street,

What an incredible challenge to meet.

This monument will be in St. James Park.

It will be lighted, daytime and dark.

There will be tapes of people’s stories,

Telling their tales of horror and glories.

You can come and leave a note,

Let others see what you wrote.

Come and visit, then call for change,

More housing is what we need,

Not the politicians’ greed.

There is much we need to discuss.

Come and visit the Memorial today,

Come see what the homeless have to say.

Cathy Crowe is a longtime street nurse and a Distinguished Visiting Practitioner at Ryerson University.