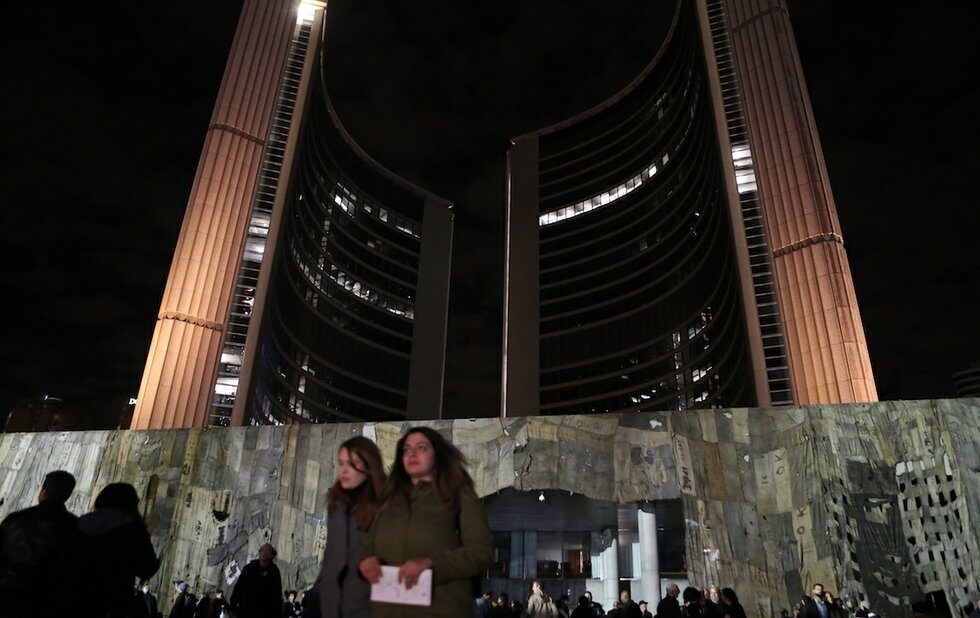 Toronto is growing by the square metre, with buildings popping up everywhere. The city’s art scene is also changing and, in some cases, responding.

In 2018, all-night art event Nuit Blanche extended to Scarborough and Don Mills. Fighting condo glut, artists are building spaces in overlooked corners and raising voices against the threat of Toronto becoming homogenized for the rich.

Thinking about the urban landscape is second nature in a profession in which space is a core element. That’s one reason arts organizations here and across Canada are drawing attention to the contested status of the land beneath our feet. Land acknowledgments of First Nations territorial rights preceding art events have become common. This year saw Canadian art galleries cited internationally for changing the terms under which Indigenous art is exhibited. At the same time, one of the city’s leading curators, the AGO’s Wanda Nanibush, started a conversation to get arts professionals to better understand how to do it right.

With this attention to historical legacy, and commitment to reasoned dialogue, the art world increasingly feels like a realm more thoughtful and separate from wider public spheres. Artist-led dialogue contrasts strikingly with conniving public figures like Premier Doug Ford, who emulate the worst tendencies of our U.S. neighbours. Toronto artists are fighting back in the best way they know how. By making art and putting on shows – some of it explicitly in protest.

For Nuit Blanche, the Ghanaian artist transformed the pedestal ramp of City Hall by wrapping it in a patchwork curtain of jute fabric that had previously been used in trade of cocoa, coffee and charcoal. A thrilling, instantly readable monument to labour, colonialism and the hard truths of commerce.

This massive art project in Mississauga’s Southdown Industrial Area featured 13 outdoor installations that visitors could tour using a specially commissioned MiWay bus. Many of the works captured the event’s theme of stewardship in the face of environmental crisis, while remaining playful. A show highlight was Tomás Saraceno’s giant walk-in air balloon made from thousands of plastic bags.

For those who saw Belmore’s excellent 2014 show at the Justina M. Barnicke Gallery, her AGO exhibition was a revelation. This show featured a different but equally compelling range of works. Her monumental stack of shopping carts packed with fresh clay offered a concise statement about Indigenous dispossession. Just one of many works on view that combined critique of social and power structures with strong emotional impact. 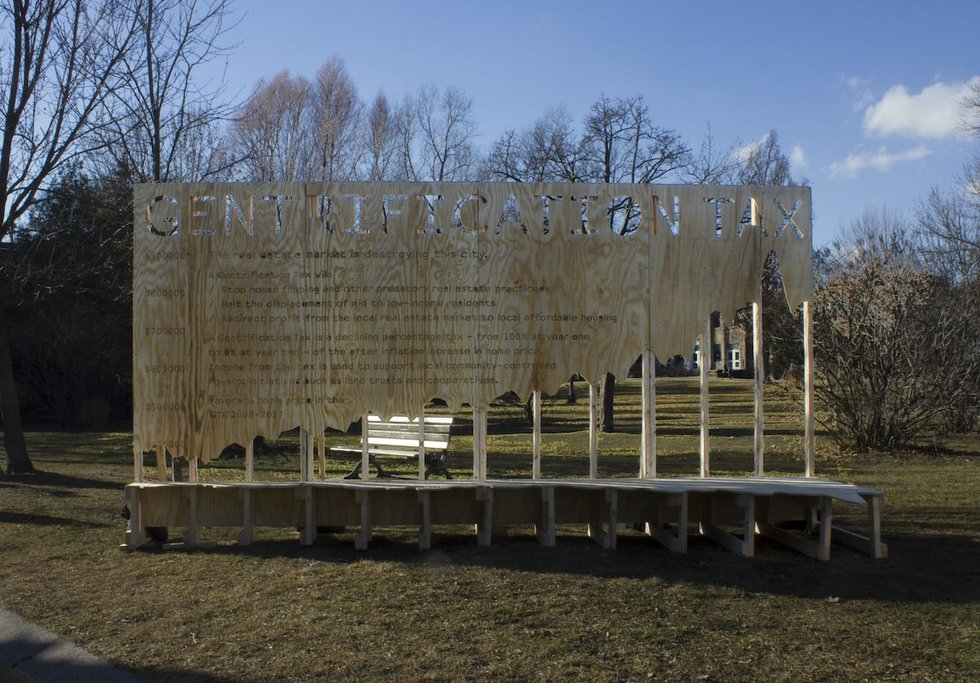 GTA stands for Gentrification Tax Action, an ad hoc artist group who – in different combinations of people – have made activist art since the 90s. Via a temporary billboard installation in Trinity Bellwoods Park and poster project, GTA proposed a practical solution to Toronto’s gentrification problem: a tax on real estate speculation, with the money redirected to affordable housing. Their work added much-needed nuance to the conversation around the city’s affordable housing crisis.

Canada produces a lot of strong artists. Bool is a contender for one of the best. Her stunning photo collages and tapestries in this show combine the work of modernist giants like Le Corbusier with vintage postcards of nude Algerian women, whom the architect also made sketches of in his off hours. A deft exposé of Orientalism and the darker underpinnings of modernism.

This was a welcome survey show for the 2017 Scotiabank Photography Award winner. Niro is skilled at bringing humour to dark subject matter like the decimation of her Indigenous ancestors by white settlers in Canada. The preference for comedy and a light touch on view in this exhibition made clear her connection to the sophisticated craft-based work of artists like General Idea and Allyson Mitchell.

Attendees at the MOCA’s inaugural exhibition at its new home in the Lower Junction Triangle were probably as curious about the building – five floors in all – as they were the art. This show is multifaceted and sprawling, with textile works sitting next to a playable and wildly decorated pinball machine, adjacent to sculptures and video works. A total experience of art and space, its highlights include works by Dineo Seshee Bopape, Tuan Andrew Nguyen and Rajni Perera.

How calming it was to visit the white environ Yoko Ono created in her three-part, ceramic-based installation. Ono was part of the first wave of artists making interactive (or instructional) artworks in the late 60s and 70s, and this recent work confirms her preeminence. Made with the help of museum visitors – who reassembled broken china and threaded twine into a room-sized spider web – and probably for that reason, the installations evoked the timeless mark-making of artists like Cy Twombly.

This exhibition articulates the forms power takes in the 21st century through works that highlight how today’s geopolitics are networked. We understand we live in a networked world and yet it remains intangible in important ways. The research-based works in this exhibition, such as Bureau d’études’ mappings of what they call “the World Government,” create a visual lexicon for grasping ideas society has yet to fully grapple with.