For more than four decades, the groundbreaking Toronto artist and teacher explored feminine archetypes and fought for the marginalized and voiceless 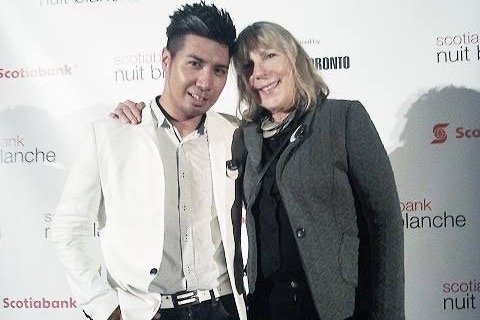 Canada’s art world is reeling from the death of painter Rae Johnson, who passed away on May 18 at age 67, as a result of amyotrophic lateral sclerosis (ALS), or Lou Gehrig’s disease.

Born in Winnipeg, Johnson came to Toronto in the mid-1970s to study at the New School of Art and the Ontario College of Art. Starting out as a figurative painter, she was one of the founding members of the influential collective ChromaZone gallery. She began painting landscapes in the late 1980s and returned to figurative work near the end of her life.

Angels And Monsters, a two-part 40-year survey of Johnson’s work, is currently on at the Christopher Cutts Gallery, although there was no opening reception because of the COVID-19 pandemic. The first part, consisting of Johnson’s figurative work, was set to close April 18 but the gallery has extended the run until June 27. The second part is scheduled for this fall and will showcase Johnson’s landscape paintings of the 1990s and 2000s.

In her catalogue notes for the exhibit, Johnson says she chose the title because a lot of her early work started with her interest in exploring images and symbols seen through the contemporary female experience.

“I was especially interested in how feminine archetypes have appeared and been depicted historically and in the contemporary world,” she writes. “Another topic was the sexual exploitation of women, specifically from the female gaze and from my own experience as a young woman artist coming of age in the 60s and 70s.”

Part of Angels and Monsters: Madonna With Sunglasses (Anunciation), 1982 (left), and Alchemical Love, 1985.

Johnson studied for a time in New York City and was, she writes in the catalogue notes, “disgusted and fascinated by the vastness of the pornographic industry.” She sought to remake the images she found, not to celebrate it but rather to express “the horror of these acts of dehumanization where the spirit was detached from the body.”

Her OCA graduation open house included some of these paintings, and the subsequent outcry from the public – police threatened to close down the show – helped launch her lengthy career.

“She was a mentor, a colleague and friend,” says artist and curator Carla Garnet, who got to know Johnson through her work displayed in Carmen Lamanna’s galleries.

“[Rae] was really kind to me when I was coming up,” says Garnet. “She encouraged the ChromaZone collective to let me both show and administrate the breakout Chromaliving show curated by Tim Jocelyn and Andy Fabo in 1983. She and I then co-curated Painting Beyond the Zone in the spring of 1984.”

In 1987, Johnson moved to Northern Ontario and began painting landscapes. That same year she became a professor at OCAD University, where she began to develop and nurture generations of artists.

“She taught me for four years, beginning with digital painting in 2005,” recalls artist Julius P. Manapul, who joined the OCAD U staff last year as associate chair of contemporary drawing and painting.

“We immediately hit it off. Rae was always supportive and encouraging. After I graduated, we worked on many projects. She was there throughout my career. At the beginning, I was one of the only students dealing with the context of racism and queer identity. That was a struggle, but Rae encouraged me to stick with what I believed in. And you can see that in her own work, in which she fights for people’s rights, especially when they have lost their voices.”

Johnson’s work often drew on her dreams, and is full of Jungian archetypes and symbols.

“Her work digs deeply into her psyche, her narrative,” says Manapul. “She delves into the emotions. I think that’s why I gravitated towards her as an artist and as a person. She opened up conversations with other female artists and other marginalized artists and told us that it was okay to talk about these things, whether literally or through symbolism and dreams.”

One of her last paintings, 2018’s haunting Winter Angel (part of the current exhibit at Christopher Cutts), harkens back to her earlier figurative work.

In the catalogue description, Johnson, who was diagnosed with ALS in August 2019, explains, “I think I had an unconscious knowledge that the series was a return to my earlier work. It had come full circle. The angel turns away from the central figure, who is walking down a city street. It is cold and desolate. The angel leaves. The story is over.”