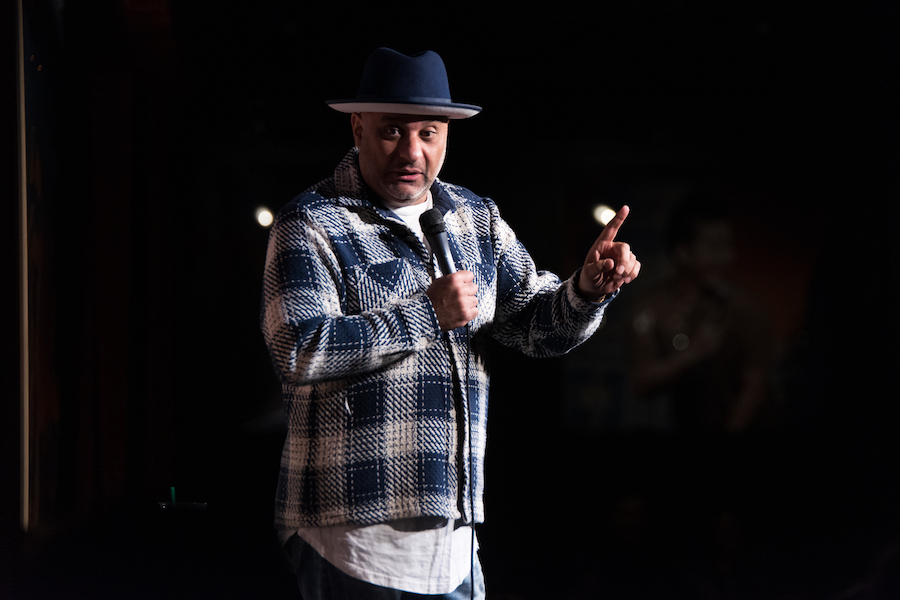 Courtesy of The Condo Store

ACT YOUR AGE by Russell Peters. July 28 at Scotiabank Arena (40 Bay). $72 and up. ticketmaster.ca

Russell Peters gets into gender identity in his new show Act Your Age. I didn’t know that going into a conversation with him. But I guess it should come as no surprise since comedians of a certain age (see also Dave Chappelle and Ricky Gervais) have been harping on the subject lately.

Peters has been touring the show – billed as his take on cancel culture, aging and the current state of the world – since the beginning of the year. Peters clarifies that the show is not so much about cancel culture as it is about the unreasonable anger Generation X (Peters’s generation) has towards millennials and Gen Z.

He’s speaking to NOW from the offices of The Condo Store alongside the real estate investment firm’s co-founder and CEO Simon S. Mass. The occasion for the interview is not Peters’s show (which we’ll get to in a bit) but his partnership with the agency, which sells pre-construction condos to investors. Peters, the ground-breaking Canadian comedian who was the first to have a stand-up special on Netflix (2013’s Notorious) and opened doors for South Asian comics like Hasan Minhaj, is now The Condo Store’s brand ambassador. Like every other brown uncle, he’s getting into the real estate game.

“He’s a client first and a brand ambassador second,” says Mass. “I like to put ‘friend’ first,” Peters counters.

According to Mass, The Condo Store has over 300 clients, some owning over a hundred units in Toronto and others who are satisfied with two or three. We have a conversation about real estate investment, getting into the nitty-gritty of why it’s a sound investment despite inflated prices and my own cynicism because of industry greed and Ford government manipulations.

And then, with too little time remaining in our interview, we got into Act Your Age, so-called cancel culture and the criticism surrounding Chappelle’s The Closer, which inspired a walkout among the LGBTQ2IA staff at Netflix and their allies because of how the comic repeatedly targets the trans community and ignores the real-world violence they continue to face. Transgender people are over four times more likely than cis gender people to be targeted by violent crimes. I didn’t have time to discuss that with Peters. Here’s an edited and condensed version of that conversation, which was abruptly cut short when Peters was pulled away to another engagement.

Talking about cancel culture seems explosive. To be upfront, I do believe someone like Dave Chappelle deserves the criticism he’s getting. I don’t agree with him. Just so you know where I’m coming from.

You’re one of those guys. What part of it don’t you like?

That was a little one-sided, I agree. That part even made me go, “ummmm.”

We are talking about very specific comics when we talk about the ones who are punching down, like Chappelle, Ricky Gervais…

But are they punching down? Or are they just saying what everybody’s thinking?

That’s what Trump did, too. Trump said what a lot of people were thinking. Whose thoughts are [we] encouraging?

But again, you can’t tell these people they can’t have these thoughts.

Talk about empowering voices then. The trans voices don’t have as big a microphone.

Some of them do. There’s also the argument that what you feel and what you are are two very different things. Because when you die, your feelings go away and what you are will live forever. And I’m talking on a genetic level. In 150 years, you can dig up whoever you want, scrape their bones and get their DNA and be like, “This was a male Caucasian.” They won’t be like “male Caucasian, but felt like…” It doesn’t matter.

Why go there if you’re not part of that community and you have a hard time understanding how they feel?

I’m not talking trans. I’m talking the non-binary ones. Trans, I understand. I have friends that are trans. I understand it from how it’s been explained to me from them. But even they’re like, “We don’t know what non-binary is.” I have a friend, Pink Foxx. I only know her as a woman. But she was born a boy. I was asking her questions, all kinds of questions. I’m like, “When you were a little boy…” She goes, “I was never a little boy.” I go, “Well, you had to have been a boy at some point to become a woman now. I go, ‘You can’t say you weren’t a boy because then you didn’t transition.’ And I was like, ‘Were you attracted to dudes?’ She was like, ‘No, I was attracted to women.’ And now you are with women. I’m like, ‘So what are you?’ She goes, ‘I’m a lesbian.’ I go, ‘What the fuck? I’m so confused.’”

It’s so many layers to this thing. We can’t just make it seem like it’s a cut-and-dry issue. There’s questions to be asked. And the problem is nowadays, everyone’s so afraid to ask questions. Because when you ask questions, you can be demonized for asking the question, vilified – and all I’m really trying to do is just get the answer. For purposes of understanding.

Hannah Gadsby won’t let the state of the world, Netflix or Dave Chappelle derail her comedy