The best dumplings in Toronto

The blueprint of Francis Bermejo and Rob Granicolo’s new restaurant at the Templar Hotel: Pan-Asian food refracted through the prism of Filipino cuisine. There are plenty of nods to Canadian ingredients and comfort food, including Bermejo’s duck dumplings, which come stuffed with an airy, velvety mix of Quebec foie gras and duck confit and served in a rich broth ($12).

The prices seem to have finally caught up with the times at this lovably rough-around-the-edges Chinatown joint, which now charges a whole $9.99 per platter of dumplings. What hasn’t changed: the red dining room, the occasionally brusque service and the army of cooks stationed at the window, working their way through ever-overflowing bowls of dumpling filling. You can get the little suckers steamed (or frozen to take home), but the pan-fried dumplings ($9.99/12), held together by a lattice-like overlay of crispy starch, are a must-order.

Since opening in 2005, Mother’s has worked its way up from a tiny basement kitchen to a spacious dining room in Chinatown on the strength of its dumpling recipes – the open kitchen reportedly turns out 2,000 a day. There’s a dumpling on the menu for every craving and dietary preference, including pork and bok choy, shrimp and egg or winter melon and tofu. I’m partial to the juicy, acidic punch of the pork and pickled veggie ($7.19/six or $10.89/10), which come in a whole-wheat wrapper – always a great excuse to eat more dumplings.

Dearly departed stand-up comic Mitch Hedberg once opined, “Rice is great when you want to eat 2,000 of something.” Similarly, this cute, cozy family-run Turkish spot in Etobicoke is perfect if you have the kind of hunger that only 45 or so dumplings can satisfy. Tiny beef dumplings called manti ($17.95) are hand-stuffed two doors down at sister restaurant Galata Cafe before being boiled and coated with a hearty helping of garlicky yogurt, plus mint, paprika and melted butter.

The humble dumpling is a cornerstone of the menu at the Food Dudes’ luxe new spot off King West, where options range from fairly traditional pork dumplings ($15) drizzled in chili oil to squid ink versions filled with ethically sourced scallops, herbs and poblano peppers, then topped with hunks of Alaskan king crab and crab-infused hollandaise ($20). On the more sculptural side is a plate of wings ($16) stuffed with spicy shrimp and rolled in crunchy pearls of quinoa — that counts, right?

Sang-Ji gives “hole in the wall” new meaning. The minuscule North York kitchen has just enough room for 10 seats and three menu items. Luckily for dumpling hounds, one of them is its namesake dish ($6.99/four), a close cousin to the xiaolongbao that’s pan-fried for a thick, chewy bottom and a puffy top. Follow the handy instructions on the business card: poke the skin, slurp out the gloriously rich broth (which starts as a jelly that’s mixed right into the pork filling to leach out as much flavour as possible), then down the whole thing. 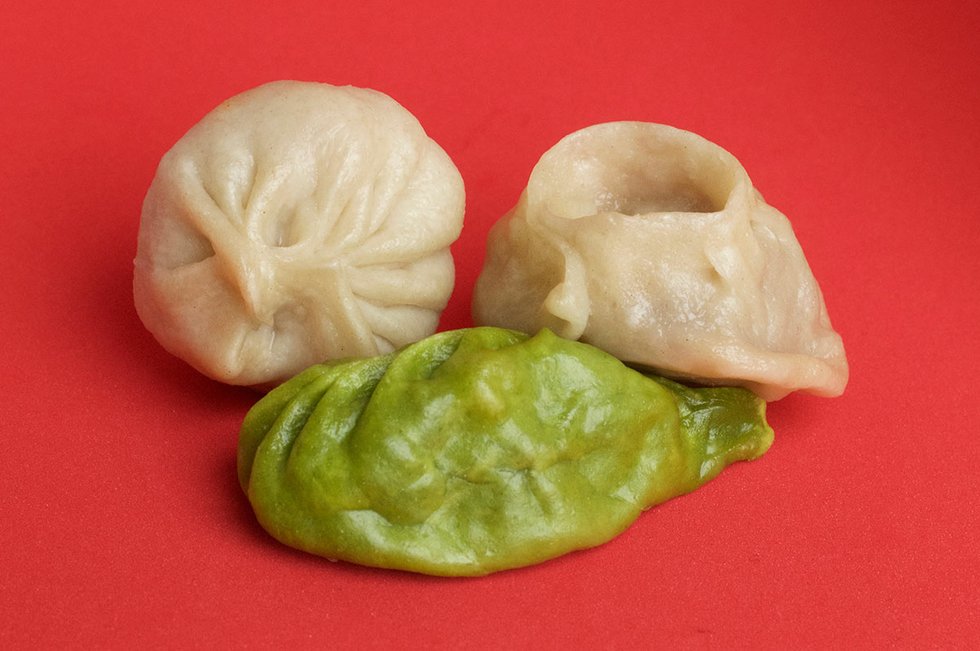 Good news, my fellow east-enders: we don’t have to schlep to Parkdale for a momo fix anymore! Formerly Avli, this new Danforth spot does traditional momos while crowdsourcing ideas for new fillings, like beetroot and cauliflower, from diners. Standouts include the lamb ($11.99/10) and shrimp momos ($12.99/eight), both bursting with flavour and moisture. From the veggie menu, there’s the phing-tsey ($10.99/10), a bright, gently bitter leaf-shaped dumpling stuffed with feta, spinach and glass noodles. All momo orders come with broth and a side salad – a great deal that gets better with upgraded sides on weekly “Momo Monday” nights.

Hastings is the combination Polish restaurant/cafe/diner/barbershop Leslieville didn’t know it needed. Plenty just stop in for a cup of coffee or a breakfast, but the pierogi ($6/four, $10/eight, $12/dozen) are the way to go if you’re nursing a hangover, a broken heart or both. Choose from cottage cheese, cheddar, sauerkraut or beef and pork. They come boiled to chewy perfection with onions and sour cream. Occasionally there are special flavours (most recently, vegan lentil), and the menu even features fruit-filled dessert pierogi with sweet cream. 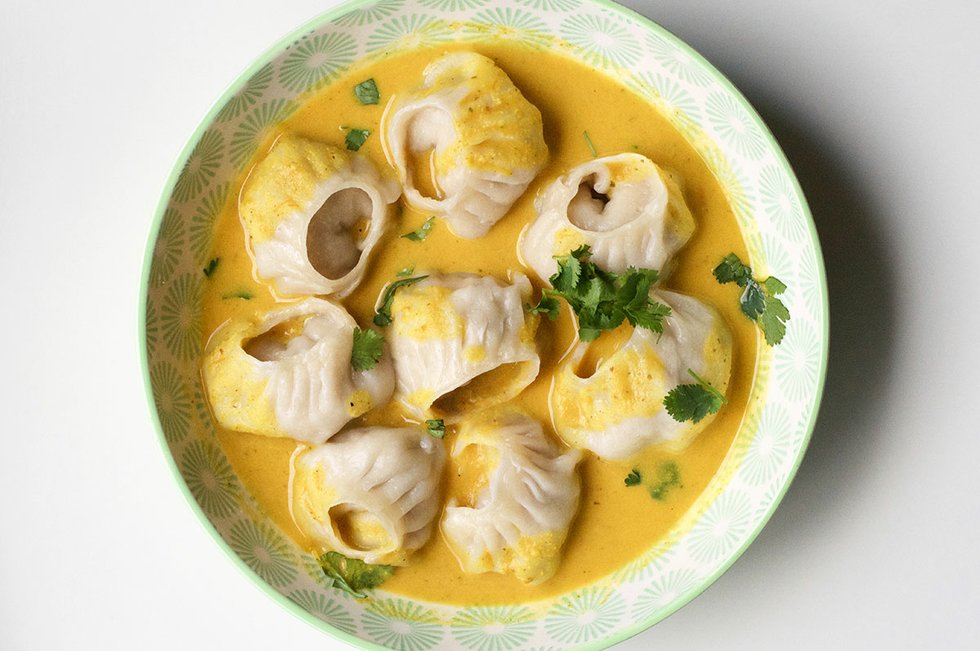 Parkdale is awash in excellent momo options, but Tibet Kitchen is special to many a massive uproar arose when the restaurant almost lost its home to a rent hike last year. A big part of the appeal (aside from owner Garab Lama’s jovial presence) is the momo menu, which features novel house-created dishes that diners can mix and match with chicken, beef or veggie dumplings. Try the chat momo ($12/eight), featuring cilantro, tomato and a drizzle of tamarind sauce, which Lama says was created in tribute to a recent momo craze in India, or the jhol momo ($10/eight), which sets the dumplings swimmin’ in a mild curry “gravy.” Of course, they’re also perfectly good straight up. 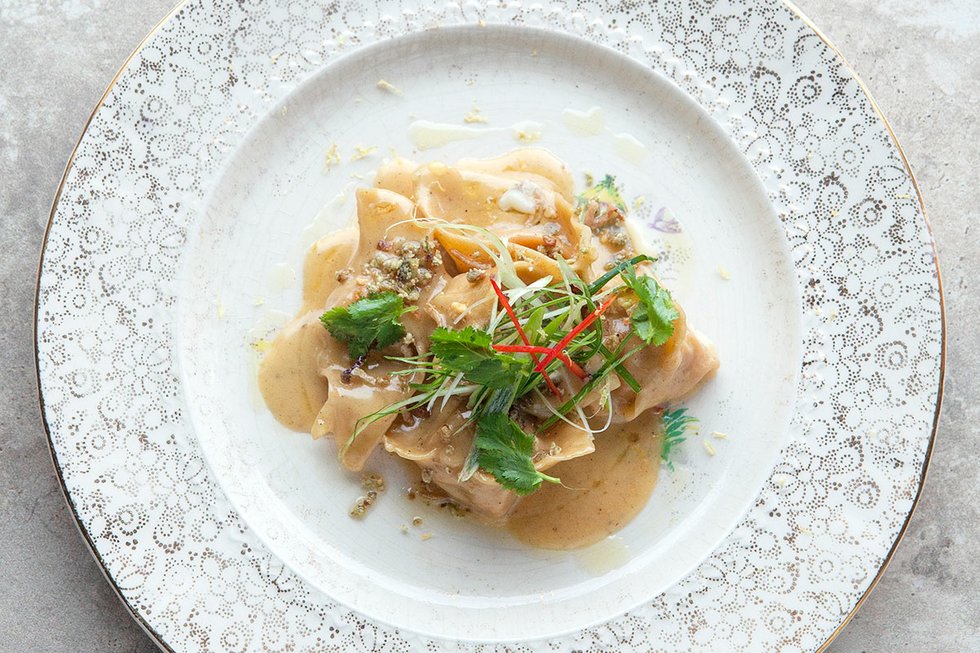 Want to try making Nick Liu’s dumplings at home? Find out how!

Ask any west-sider, and they’ll tell you Polonez’s pierogi ($7.25/six, $12.95/dozen) are the best you can get on Roncy outside of a church basement. Still, this long-running family spot isn’t so traditional that they won’t offer you the choice of pan-fried or boiled. Cheddar cheese is the top seller, the owners say – but if you wanna really go Polish-style, opt for the sauerkraut and mushroom. (Be sure to snag a bag for your freezer on the way out.)

It might not be an actual sister location to world-famous Taiwanese chain Din Tai Fung (peep that extra “g” on the end), but this strip mall spot is still one of Markham’s top destinations for dim sum. The obligatory xiaolongbao ($8.25/six) are indeed killer – juicy, flavourful and compact enough that you can skip the whole pierce-and-slurp routine and pop them in your mouth in one go – but if there’s room on your table, the practically taco-sized pan-fried pork dumplings ($8.75/six) are equally worthy.

Chinatown joints too plebeian for your liking? Revel instead in the preposterous levels of opulence at the Persian-carpeted, marble-pillared, purple-velvet-swathed Crown Princess (“Liberace’s powder room,” as ex-NOW food writer Steven Davey wrote after the place opened in 2010). Its take on dim sum staples are similarly OTT, including siu mai stuffed with foie gras and topped with tiny piles of caviar ($7.30/four), or the Zen dumplings, glassy open-topped boats filled with mixed veggies ($5.30/three).

Black Hoof/Rhum Corner alum Stu Sakai’s new sake bar has been open on Dundas West for all of two weeks, but its gyoza ($9/five) are already garnering a rep as some of the best in town. They’re stuffed with moist pork, green onion, salted mustard greens, cabbage and plenty of ginger, then fried, steamed and fried again for maximum golden-brown, crusty goodness.

When Steambox opened its first standalone eatery this summer, it was a hard-won achievement built one dumpling at a time chef Kayeon Lee had sold out of pop-ups and temporary locations for years, building up a local following. The eclectic menu uses the dumpling as a base for a huge array of flavours and ingredients, from 10-hour pulled pork and kimchi bacon to yam with makrut lime curry and cheddar with tomato and soppressata, better known as “the pizza dumpling” (all flavours $5/three). In case that’s not enough, the dumplings can be made gluten-free on request (add $3).