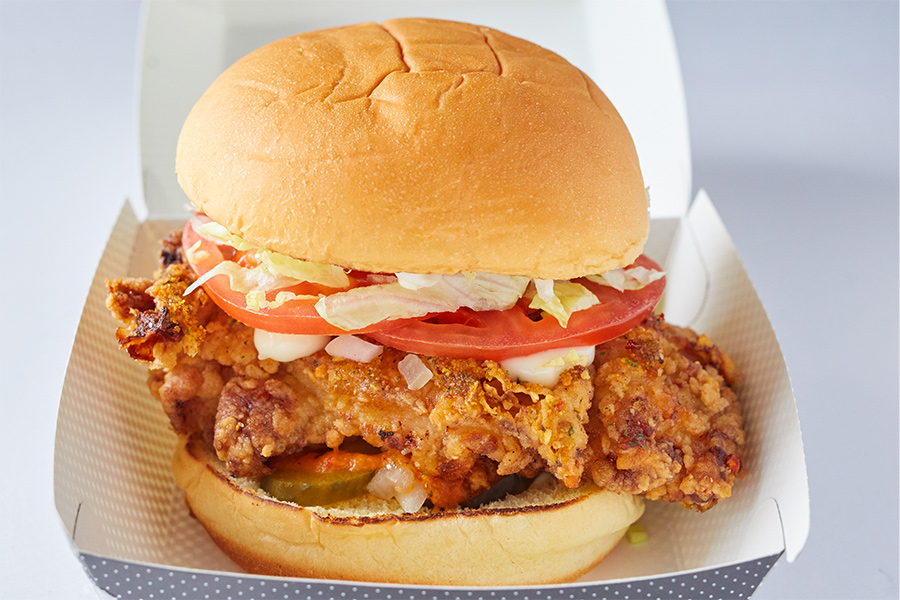 The Nima fried chicken sandwich, along with all of Aunty Lucy's menu, will be available for east siders starting March 18

On top of that, pop ups serving hard-to-find cuisines, like Ghanian and Romanian food, opened this week.

A Leslieville treasure, Yard Sale Bar, is closing temporarily to become something brand new. Read on to discover the exciting new restaurants, bottleshops and bars that opened between March 9-16.

The Leslieville bar is only closing temporarily as they revamp their space to become Lavender Menace. They plan to re-open in the spring. Read about the name change and the new menu here.

The burger joint, known for flavours influenced by Ghana, is launching a three month pop-up in Leslieville starting March 18.

This takeaway pop-up from chef Miriam Echeverria is bringing new flavours from Mexico weekly. Next week, the menu includes fideos noodles, chicken with pumpkin seed sauce and caramel flan on the menu.

The Junction has a new bottle shop. Green Apple just opened with a range of fun, affordable and unconventional wines, beers and ciders.

A British Columbia chain of rolled pizza is coming to Toronto this spring. Konz started as a food truck and has expanded east across the country, finally touching down in Ontario. Their portable, cone-shaped pizzas will be available at locations at King and Shaw and Bathurst and Bloor.

This new pop–up inside of Milagro on Mercer is doing fresh Mexican ceviche nine different ways. From octopus to snapper, the ceviches are the big draw but they also serve salads and tacos and appetizers like guacamole and chips.

The first Mama Akua’s pop-up was in August and since then they have popped up a number of times serving their Ghanian jollof, red red and fufu. Their next pop-up is March 19 and proceeds will be going towards a new joint initiative to support community organization The Kickback’s youth programming.

Not a cuisine you see often at restaurants in Toronto, chef Haan Palcu-Chang is serving a whole slew of Romanian dishes. Pick-up is at Sam james Coffee Bar on Ossington. Palcu-Chang is introducing dishes like salata de ardei copți cu castraveți, sarmale and papanași to wider audiences