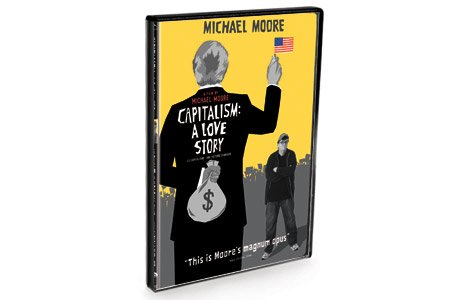 This is Michael Moore’s best movie since 2002’s Bowling For Columbine. That’s not because he’s suddenly become a more sober, responsible documentarian (I still wouldn’t trust a word he says without double-checking), but this time his outrage sounds real and bone-deep. He’s picked the biggest target of all, capitalism itself, and he’s taken a genuinely radical stance: the system doesn’t need regulation it needs dismantling.

He covers the sub-prime mortgage scam, with tales from its victims and the vultures who got rich, and interviews with various experts. Then he tears into last year’s bank bailouts and brokerage giant Goldman Sachs.

There are lots of side trips, some of them funny, notably Jesus as capitalist cheerleader, achieved by re-voicing old movie clips. The best of them focus on companies with a different mandate than maximum profits for shareholders, notably the worker-owned cab company in Chicago whose bottom line is a living wage.

Extensive extras do a good job of fleshing out material only touched on in the movie.