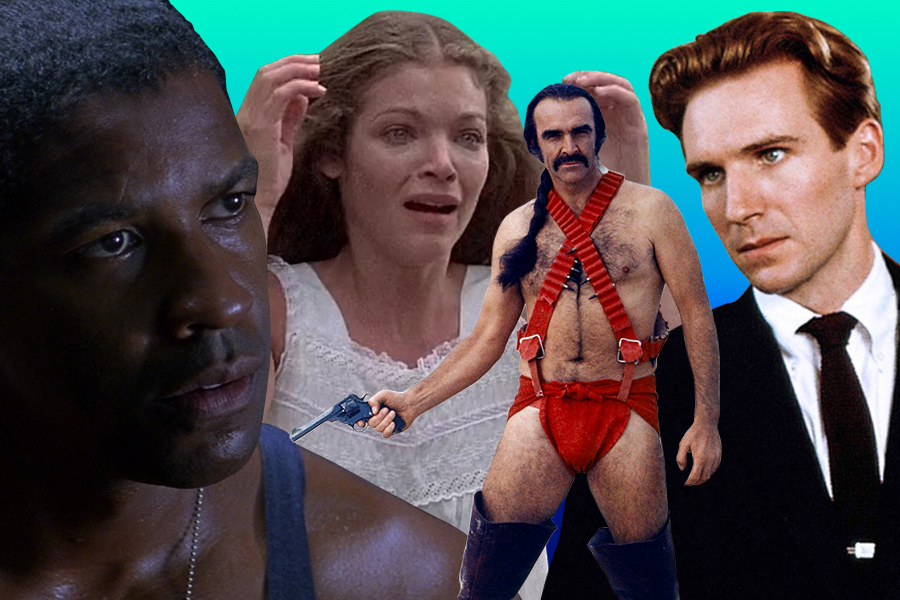 When Disney+ Canada adds the grown-up Star tier to its streaming service on February 23, the biggest draws will be the titles people already know: recent Oscar winners like The Shape Of Water and Three Billboards Outside Ebbing, Missouri, the complete Alien, Predator and Die Hard franchises, most of the Planet Of The Apes movies, Joel and Ethan Coen’s marvellous O Brother, Where Art Thou? (and their considerably less marvellous The Ladykillers) and the bulk of Wes Anderson’s output, all streaming in HD or 4K.

But dig a little deeper and you’ll find hundreds of other features from Disney’s Touchstone and Hollywood arms, as well as from the 20th Century Fox and Fox Searchlight Pictures catalogues acquired a couple of years ago.

Here are 10 hidden gems streaming in the Star section of Disney+ Canada.

Writer/director Boorman’s post-apocalyptic sci-fi allegory – which the filmmaker made after an ambitious adaptation of The Lord Of The Rings fell apart in pre-production – is one of the strangest projects ever made in the genre, a delirious mashup of 70s hippie platitudes, 60s social-engineering paranoia and the far-future setting of H.G. Wells’s The Time Machine. You may have heard of it as the one where Sean Connery runs around in a ponytail and a diaper, or the one with Charlotte Rampling and the weird sex vortex, or the one with the giant floating head that vomits guns at people. It is indeed all of those things, and now it’s a Disney movie. Who says corporate mergers are the death of art?

Two years after Carrie minted him in Hollywood, De Palma returned to psychic violence with this even more bombastic thriller, which stars Kirk Douglas as a former spy who unravels a sinister government program to shape telekinetic children – including his own son – into weapons of war. John Cassavetes plays the calculating puppet master who’ll stop at nothing to keep the initiative secret. It’s ridiculous in the best possible way, with De Palma goosing every scene with bravura camera moves, elaborate stunts and increasingly overheated performances from the likes of Amy Irving, Andrew Stevens and Fiona Lewis. Which is to say, it’s an awful lot of fun.

Yes, producer/director Redford’s look at an early scandal of the TV age is a very white movie about very white problems – specifically, the problem of being an underachieving member of a lauded family who winds up becoming a game-show champion because he’s given the answers in advance. But Quiz Show uses Charles Van Doren’s defeat of Herb Stempel on NBC’s Twenty-One in 1957 to unpack the various ways in which class and ethnicity were constantly at play. Redford draws the contrast between contestants by casting Ralph Fiennes, fresh from his Oscar-nominated turn in Schindler’s List, as Van Doren and John Turturro, in full squawk, as Stempel, but it’s Paul Attanasio’s screenplay that keeps either man from being a complete caricature. And a quarter of a century later, the movie’s observations about how easily mass media can deliver a convincing lie to millions of people is still distressingly relevant. 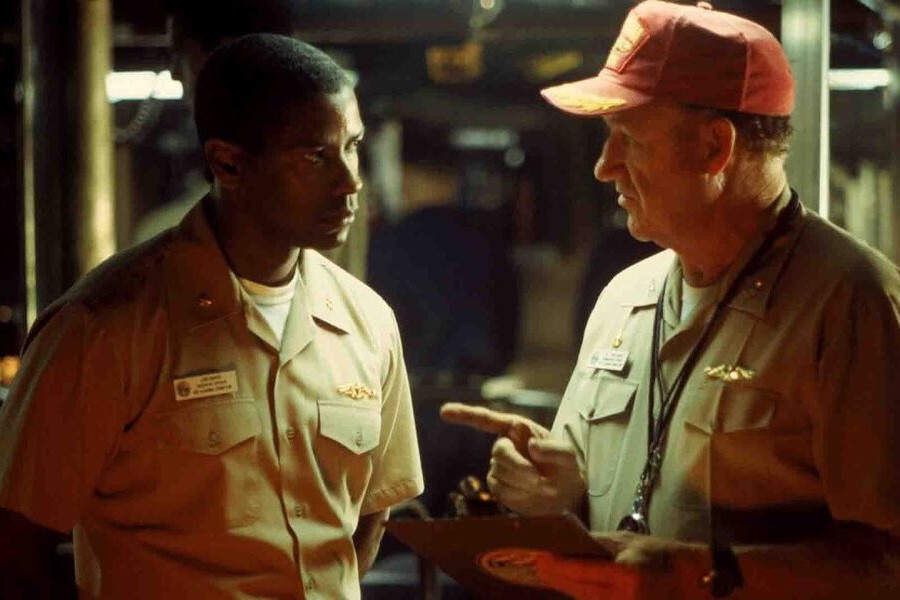 Denzel Washington and Gene Hackman face off in Crimson Tide.

Sure, it’s an overheated action movie from uber-producers Don Simpson and Jerry Bruckheimer, made at the height of their Touchstone deal for high-concept movies where A-list stars yell at each other while sirens blare and soldiers get ready for battle. (See also The Rock, Armageddon, Enemy Of The State and so on.) But Tony Scott’s adrenalized submarine thriller might actually be the perfect iteration of that formula, starring Denzel Washington and Gene Hackman as, respectively, the executive officer and captain of a U.S. nuclear submarine whose adversarial dynamic is challenged even further by a launch order that Hackman supports and Washington doesn’t. Washington and Hackman are both tremendously watchable, and Scott surrounds them with emerging talent like Viggo Mortensen, James Gandolfini, Steve Zahn and Ryan Phillippe. You could approach it as a big dumb Dudes Rock movie, or you could watch it as a smart, shifty thriller that sets competing concepts of masculinity against one another, with the fate of the world in the balance. It works either way.

The Hughes Brothers burst onto the scene with 1993’s Menace II Society, a festival smash that picked up where John Singleton’s Boyz N The Hood left off; looking for high-visibility talent to feed its brand-new Hollywood Pictures imprint, Disney came calling. The result is this gorgeous, brutal 70s thriller starring Menace’s Larenz Tate as a Vietnam vet who can’t readjust to life back in the Bronx, and eventually assembles a crew of fellow veterans to rob armoured cars. Inspired by actual events, it’s a showcase for both its young cast (which includes Bokeem Woodbine, Freddy Rodriguez, an incendiary N’Bushe Wright, Chris Tucker and a baby-faced Terrence Howard) and the Hughes’s filmmaking chops, as the filmmakers and their amazing cinematographer Lisa Rinzler balance spectacular, white-knuckle heist sequences with quieter moments between Tate’s Anthony and Keith David’s fatherly Kirby. Overlooked at the time because it didn’t fit into the wave of chatty gangster pictures spawned by Quentin Tarantino’s Reservoir Dogs, Dead Presidents now deserves a look on its own glossy terms.

There is a lot that is problematic about Beatty’s political satire, in which the director/producer/co-writer plays a disintegrating senator who reinvents himself as a hip-hop truth-teller – dropping the N-word, pulling a young Halle Berry into his orbit, and somehow getting the poet Amiri Baraka to effectively endorse the whole thing as a street preacher who amplifies his message throughout the entire picture. It is, to say the least, a wild swing, and it would not have been surprising if, on acquiring the Fox catalogue, Disney had dropped Bulworth into the same vault for uncomfortable artifacts where they keep Song Of The South and the centaurs from Fantasia. But here it is… and it turns out Beatty’s points about the Democratic establishment’s cynical exploitation of the Black voters on which it depends are still as accurate and unforgiving as they were 23 years ago. And the soundtrack holds up too.

Released six months after Saving Private Ryan, Malick’s evocative WWII study left a lot of people looking for a more visceral experience, and wondering why top-billed stars like Sean Penn, Nick Nolte, John Travolta and George Clooney had minimal screen time. Two decades later, The Thin Red Line stands as a key point in the evolution of Malick’s artistry, reimagining James Jones’s novel about American GIs taking the island of Guadalcanal as a three-hour meditation on war as a violation of natural order. And his then-unknown leads – Jim Caviezel, Adrien Brody, Ben Chaplin and more – aren’t so unknown these days.

Of the four dramas Lee made for Disney’s Touchstone Pictures imprint in the late 90s and early 2000s, this one is easily the strongest. An adaptation of David Benioff’s novel about a small-time drug dealer on the day before he begins a seven-year prison sentence, 25th Hour stars Edward Norton at the top of his game, supported by the likes of Philip Seymour Hoffman, Rosario Dawson, Brian Cox, Anna Paquin and Barry Pepper. It’s also one of the first movies shot in Lower Manhattan after 9/11, and Lee weaves the city’s trauma expertly into the fabric of his story. It’s as much of a social study as Do The Right Thing – and, in its own way, just as raw. (Two of the other Touchstone productions, He Got Game and Summer Of Sam, will also be part of the Star package at launch; the fourth, Miracle At St. Anna, is likely to turn up eventually.)

Had she made it today, Nair’s sprawling adaptation of Jhumpa Lahiri’s novel – about a Bengali couple (Tabu, Irrfan Khan) who emigrate to America in 1977 with their young son, whose assimilated identity leaves him floundering in young adulthood – would likely have been a prestige miniseries along the lines of her recent BBC run at A Suitable Boy rather than a feature film. Instead, Nair and screenwriter Sooni Taraporevala had to fit Lahiri’s decades-spanning story into a two-hour feature, forcing them to sharpen its narrative so that it pivots from the parents’ story to their son’s – played as a disconnected young man by Kal Penn, who makes the most of a rare dramatic lead. Despite a lavish TIFF premiere, The Namesake has sort of fallen off the radar in recent years, so we were pleasantly surprised to see it turn up in the Star launch announcement.

The sale of the Miramax catalogue a few years back left Disney with a paucity of well-appointed costume dramas; fortunately, Fox Searchlight Pictures has a sideline in them for the last decade or so. This is one of the most interesting, an adaptation of a Daphne du Maurier story from 1951 – previously filmed in 1952 with Richard Burton and Olivia de Havilland – starring Sam Claflin as Philip, a wealthy young man who welcomes his cousin’s widow (Rachel Weisz), only to suspect she harbours ill intentions. But there’s more to it than that, as Michell explores the ambiguity in du Maurier’s text and the chauvinism and misogyny of 19th century England. And Weisz is absolutely amazing as the young widow who might be gaslighting Philip… unless, of course, he’s gaslighting himself.