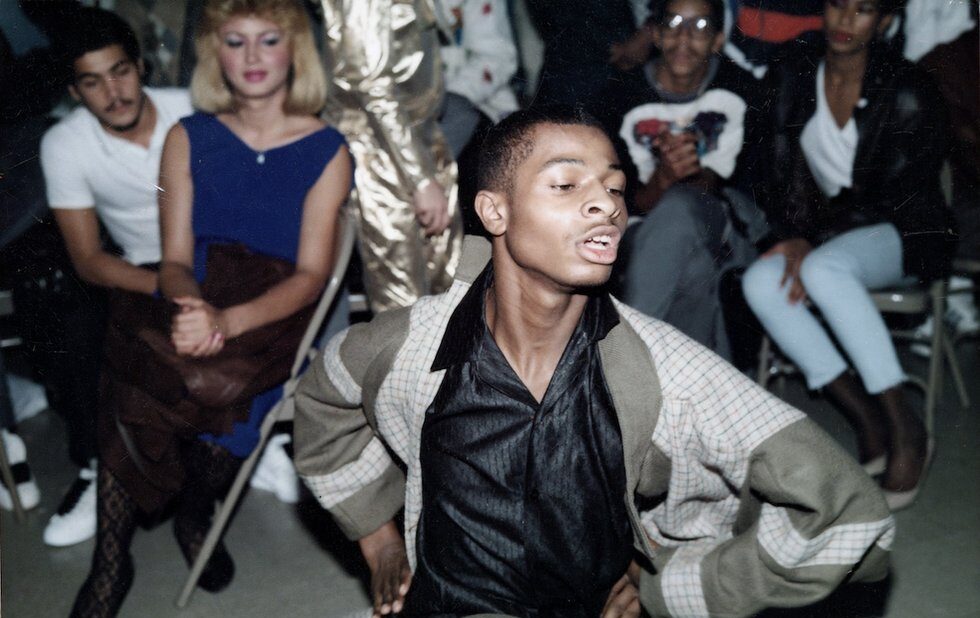 “Opulence – you own everything,” the man shouts from the pulpit.

His phrasing gleams with a winking irony, twitches under the weight of its paradox. We believe it in spite of circumstance, which is this: the people of the room, the targets of this phrase, are all somehow “disenfranchised.” They’re queer or trans, Black or brown. Mostly, they’re conjoined by these particulars, but also by a violent and unearned poverty. What have you got when you have no money? The answer, ostensibly, is “everything.”

This is a scene from Paris Is Burning, Jennie Livingston’s seminal 1990 documentary, which has been restored and is getting a run at TIFF Bell Lightbox. Its unforgettable, fertile subject matter: those extravagant, largely Black and Hispanic drag balls from Harlem in the late 80s. Its urgent, perfect occasion: this American relic somehow manages, 29 years later, to illuminate truths about our contemporary world – like, for example, our continued need for queer spaces in Toronto.

When it premiered at the Toronto International Film Festival in 1990, Paris Is Burning offered a rare anthropology: an intimate look at a subculture that seemed to exist almost independently from the “real world.” The underground drag ball scene was introduced as a queer haven, an island where the statistics of life could not debase its citizens. Economy, jagged language, social disapproval, the wicked politics that scar the blooming lives – these things were all reduced to a faint shadow looming beyond the gate, held away from the face, lurking outside the collective secret with no possibility of intrusion.

For Black and Latinx queer youth, this manicured scene became a valuable safe space, a refuge where they could express themselves freely, where the strictures and conditions of life did not apply. In Toronto, too, these illicit freedoms exist – the ballroom scene, though much smaller than in New York, persists in the face of gentrification.

“A ball is, for us, the closest we’re gonna get to all of that fame and fortune and stardom,” a young man in the film tells us, and we think, what an unfortunate conclusion for affirmation to be such a distant fever dream.

Not surprisingly, Paris Is Burning keeps turning up in pop culture. Alongside Madonna’s 1990 hit Vogue, the film – both created, it should be noted, by cis white women – has had an outsized influence on mainstream queer culture. It was the theme of Frank Ocean’s 30th birthday party. It made a cameo on Blood Orange’s song Desirée. Ryan Murphy’s Pose, on which Livingston served as a consulting producer, draws heavily on the film. And RuPaul’s Drag Race, naturally, quotes it ad nauseam. “Opluence! You own everything!” one queen said this season, instantly memeifying herself. The source – the film – was never stated.

In these moments the spectres of those who vied for stardom are raised and given some posthumous taste of global visibility.

Visibility is not a cure for disenfranchisement. It does not, for example, halt the disease of gentrification. Many queer spaces have begun to close down. Many young queer people can no longer afford to live in the Church-Wellesley Village because the housing problem has abscessed, spread like gangrene. Straight couples have moved in. Banks proclaiming themselves allies flocked. Condos sit just outside, stuck-up caryatids encroaching menacingly. A humourless exercise: count the number of lesbian bars you can think of in the city.

A strong queer presence is still there but it feels fractured, a cashmere blanket ruined by overgrown moths. All of this is to say: the Village is disappearing. Many queer spaces are no longer permanent but transitory. (Toronto’s vogue ball scene, for example, frequently moves around.) Some people think this is a good thing – that we no longer need a gay village and that we’re past all that. Young queer people have begun to conceive of themselves as being able to hang out in any number of places that aren’t explicitly queer. Also: the internet. The onset of social media has transformed the way we interact it’s now possible to meet other queer people without ever setting foot in the Village.

One afternoon last year, I met a popular queer scholar, an old gay baron of the Church-Wellesley empire who scoffed at this suburban narcissism. We sat at a table in a bookstore, me, neurotically scribbling on a notepad, and he, pontificating about the state of things. (Hint: the state was not good.) Safe spaces were a fiction, he noted. Obviously. Any bullet can pierce a sensibility, can tear through a mood. But the dispersion of queer people into a diaspora, he argued, dilutes their ability to organize and ruptures their political power. What’s gained when we have spaces like those in Paris Is Burning is lost in this new pop-up scene. Postcard cliché, but true: something temporary can never really be yours.

In November of last year, on a dull and featureless Sunday, I cabbed it to the Land of Seven Houses Ball, where the mood, at 8 pm, was lurid. There was no cover. People were dressed elaborately: du-rags and cheerleader outfits. The event ad promised “one the most flamboyant nights of your life,” and, if nothing else, it was. José Xtravaganza, a fixture in the New York ball scene, was there, voguing.

My friend Demiyah walked the runway – sex siren. I interviewed her after, interrogated her about her experience. “This world was not set up or structured to support us, so we’ve created a world where we can support each other,” she told me. She seemed certain, earnest. I wondered, absently, what it would be like if the world were a ballroom stage. Much better, I imagine.