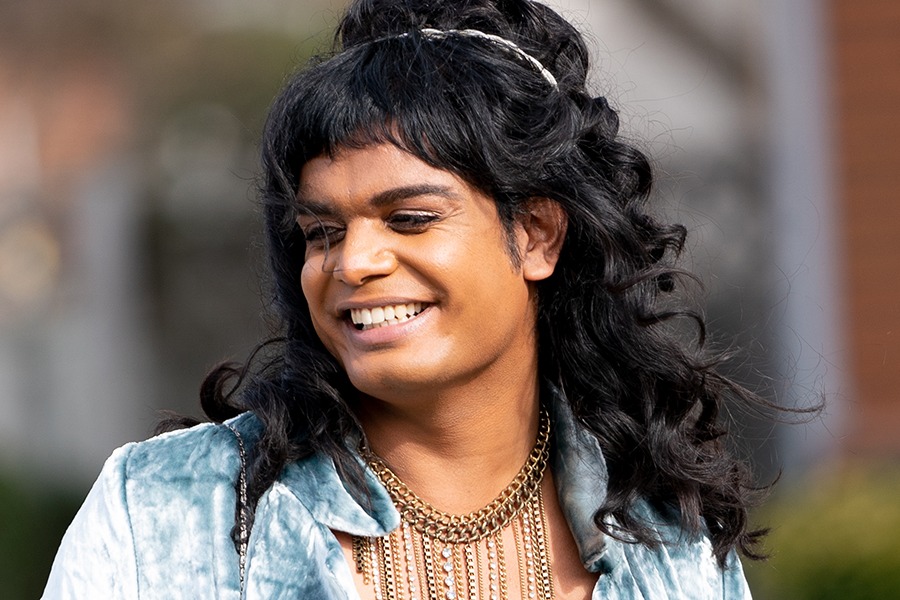 Bilal Baig is a revelation in Sort Of.

After the fallout over the way Kim’s Convenience abruptly ended, the new CBC show Sort Of is doing things right.

According to the CBC, the eight-part series co-created by Bilal Baig and Fab Filippo features the first non-binary lead character on Canadian TV, and Baig is the first queer, South Asian, Muslim actor to star in a Canadian prime-time TV series.

What’s refreshing is that there are lots of brown, queer and trans artists involved in the show, in front of and behind the camera. And that lends an authenticity to the series that is unmistakable in the first four episodes, which screen at TIFF tonight at 9 pm at the Ontario Place West Island Open Air Cinema.

Sabi (Baig) is a gender-fluid millennial Pakistani-Canadian who’s getting by in Toronto working as a nanny and bartending at a queer bar. In the pilot episode, they’ve just been given notice by the hipster parents of the kids they take care of, and broken up with their cis male boyfriend (first great line: “Oh shit, he’s cheating on me… and he went back to women”). Also, they’re not quite out to their mom. So when bestie 7even (Amanda Cordner) suggests the two of them move to Berlin, Sabi is in. Until something happens that makes the decision more difficult.

The writing is sharp, witty and literate – you’ve gotta love a script that references Michel Tremblay’s Hosanna in its first few minutes – and the characters rich and complex. Sabi initially seems shut down and cynical (Baig’s deadpan one-liners and reaction shots are priceless) but over a few episodes evolves as their world shifts and new possibilities open up.

And while Sabi’s journey is at the centre of the series, everyone around them is going through some sort of transition too. The creators strike the right tone of urbane comedy and poignant character drama. And the supporting performances – from Shaw veteran Gray Powell and Mary Kills People’s Grace Lynn Kung to the exciting stage actor Cordner – are brilliant.

Alison Klayman’s Jagged (8:30 pm, Visa Skyline Drive-In at Ontario Place) has become the hottest ticket of the festival now that Alanis Morissette has come out against it – which might make the movie a dark-horse contender for the People’s Choice award for documentary if it becomes enough of a cause célèbre. (Read Kevin Ritchie’s NNNN review.)

Pablo Larraín’s Spencer (6 pm, Princess of Wales) makes its Canadian premiere tonight, offering festival-goers the mildly perverse opportunity to see Kristen Stewart play Diana, Princess of Wales, at the theatre bearing Diana’s title. (I direct you once again to Glenn’s NNNN review.) Midnight Madness hosts the premiere of Bertrand Mandico’s After Blue (Dirty Paradise), a French sci-fi Western set in the distant future on a planet populated solely by women, where a restless teenager (Paula Luna) falls in with an outlaw named Kate Bush (yup) and embarks on a life-changing journey. It’s all just an excuse for hyper-eroticized Euro-weirdness, shot through gauzy filters on self-consciously cheesy sets. Guy Maddin would absolutely love this movie. I kinda dug it too. (Rating: NNN)

Elsewhere, the TIFF Rewind series of digital artist talks continues with a celebration of Patricia Cardoso’s Real Women Have Curves (4:30 pm, live on Twitter) checking in with Cardoso and her star, some kid named America Ferrera, for a conversation about their 2002 coming-of-age charmer, which never really got the respect it deserves. This conversation, streaming on TIFF’s socials and available on digital TIFF Bell Lightbox tomorrow, will hopefully nudge it back to life. I’m also very curious about The Good House (7 pm, Roy Thomson Hall), a gala from Infinitely Polar Bear filmmakers Maya Forbes and Wally Wolodarsky starring Sigourney Weaver and Kevin Kline – who paired up beautifully in Dave three decades ago – as ex-lovers who reconnect later in life. (NW)

Mohammed Abugeth and Daniel Carsenty’s doc Devil’s Drivers (1 pm, digital TIFF Bell Lightbox) screens again today after world premiering at the festival on Sunday. The movie follows Bedouin drivers who illegally transport Palestinian labourers into Israel from the West Bank via a part of the desert that has not yet been walled off. TIFF’s programmers have perhaps overhyped the high-octane driving scenes a bit: the doc is primarily an intimate, verité portrait of families living in Yatta, and the way their lives – and the landscape – have been reconfigured by the occupation. (Rating: NNN) (KR)

If you’re craving something weirder, The Strange Little Cat director Ramon Zürcher teams with his brother Silvan Zürcher’s on the Berlin-set psychodrama about resentful ex-roommates The Girl And The Spider. It hits the big screen at TIFF Bell Lightbox (6 pm) this evening. A little later, the bonkers-looking Brazilian movie Medusa from director Anita Rocha da Silveira gets an even bigger-screen viewing at the Cinesphere (8 pm). (KR)

The festival offers second screenings of Edgar Wright’s Last Night In Soho, Laurent Cantet’s Arthur Rambo andJulia Ducournau’s Titane (at the Cinesphere, which may cause injury), and the world premiere of Camille Griffin’s “pitch-black Christmas comedy” Silent Night, which… well, that’s gonna be something. (NW)