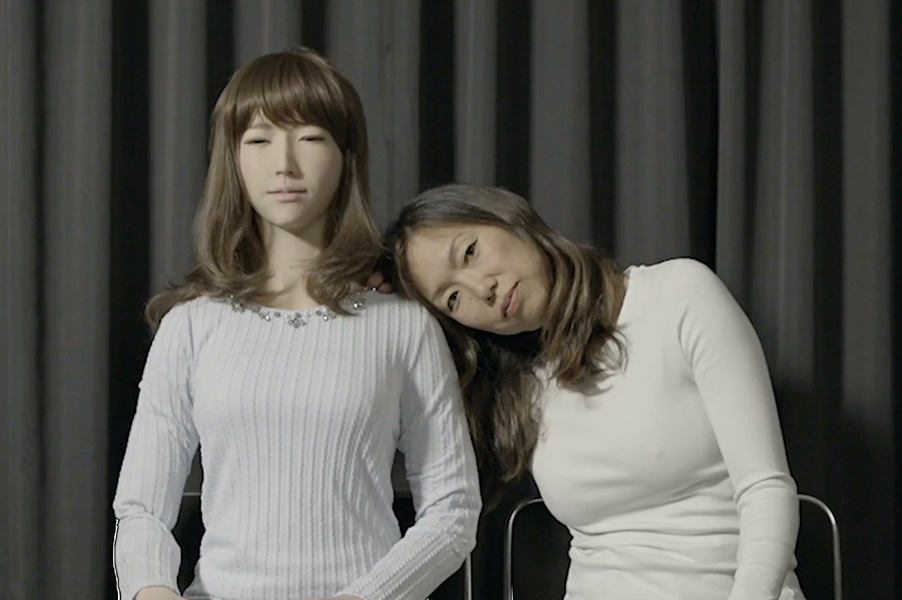 This year’s Hot Docs opener explores the extremely fungible intersection of artificial intelligence and digital avatars, as director Shin (My Enemy, My Brother) investigates the possibility of having her “mindfile” uploaded to a computer so her kids will be able to talk to a version of their mom after she’s gone. (The director’s interest is clearly tied to her father’s descent into dementia and her fear that he’ll be lost to her forever.) As the title indicates, this isn’t the same thing as uploading one’s actual consciousness to the cloud – that’s still the stuff of science fiction – but A.rtificial I.mmortality fails to explore the difference, settling for interviews with enthusiastic software developers and robotics designers who speak of an ideal future where our loved ones are always with us in one form or another. Which would be nice, sure. But the “artificial” part is hard to ignore. 74 min. Available to stream Friday (September 24) at digital TIFF Bell Lightbox. NNN (Norman Wilner)

Stephen Chbosky’s adaptation of the Broadway hit about guilt and good intentions gone wrong is well-meaning and at times very effective. Evan (Ben Platt) is a socially anxious teen trying to get by at the beginning of yet another high school year. When a letter he’s written to himself as a therapy exercise gets put in the wrong hands, and tragedy ensues, he goes along with a narrative that brings him popularity, love and the kind of stable family life he’s never known, even though it’s all based on a lie. Chbosky opens up the musical, filling in Evan’s past and contrasting the modest home he shares with his over-worked single mom, Heidi (Julianne Moore), with the home of the Murphys, a family Evan idealizes. And screenwriter Steven Levenson has made some changes that soften the musical’s cynical look at the influence of social media. Platt reprises his Tony Award-winning role with an intense, intimate performance that only occasionally feels creepy because of his advanced age, and he’s well supported by Moore, Kaitlyn Dever, Amandla Stenberg, Nik Dodani and Amy Adams. Chbosky (The Perks Of Being A Wallflower) is sensitive to the issue of teens and mental illness. But in the naturalistic world he’s created, he can’t figure out how to make it believable that people suddenly break out into song, which we accept more readily onstage. 137 min. Now playing in theatres. NNN (Glenn Sumi)

The renegade Toronto filmmaker returns to mainstream territory with a 70s-set exploitation tale about twins in love that plugs into timely conversations around narcissistic malaise and family structures. Opening with a crotch shot of self-absorbed protagonist Dominic (Félix-Antoine Duval) that foreshadows a ridiculous laundromat romp, LaBruce immediately sets an energetic and campy tone. The plot kicks in when Dominic discovers the mother he thought was dead (Tania Kontoyanni) is alive, is a lesbian and is living off the grid in the small Quebec town Saint-Narcisse. When he arrives he spies the striking Daniel (also Duval), who lives in a monastery run by a perverted priest (Andreas Apergis). The film grows more earnest, with LaBruce keeping the sexual tension and sense of expectation at a simmer throughout the second act. DP Michel La Veaux’s warm, autumnal cinematography adds to a deceptively lulling feel in the build-up to a third act that goes all in on Freudian melodrama and Catholic terror. The subtle/unsubtle shifts in the story don’t always feel entirely balanced, but LaBruce delivers both B-movie thrills and his most beautiful-looking feature while leaving a lot on table thematically for the audience to reflect on. 111 min. Some subtitles. Now playing at the Varsity. NNN (Kevin Ritchie)

Next Stop doesn’t get to where we want it to go. But it’s pointing in the right direction. The show’s second season expands on what local talents Weekes, Tapambwa and Witmer achieved the first time around with their absurd and hilarious DIY web series, which immediately staked its ground as Toronto’s answer to FX’s Atlanta. Next Stop’s vignettes capture what it means to be young, Black and opinionated in Toronto. Characters argue over rents, shrug over a dining scene that favours fusion oxtail over West Indian dishes made with pepper and soul, bemoan the limited pool of worthy men on 416 Tinder and throw down a drunken ballroom vogue session near a baseball diamond. The six episodes, roughly 10 minutes a piece, can feel half-formed. The performances can be raw. But what makes Next Stop connect is the vibes – a feeling that we’re eavesdropping on conversations that are happening across the city, and even on Instagram and TikTok, among a demographic that rarely (like never) finds its way into Canadian film and TV. This is a much more chill and uptempo representation of Scarborough then, say, the film that just premiered at TIFF. And it’s a reminder that the community needs to be up on screen more often to truly capture its diversity and vibrancy. We also need to get Next Stop’s Vanessa Adams in her own show, ASAP, because she simply kills it. All six episodes now streaming on CBC Gem. NNN (Radheyan Simonpillai)

I Carry You With Me

Night Of The Animated Dead

The 14th edition of the TPFF is a hybrid affair, with in-person screenings and streaming options. Of particular interest is the North American premiere of Of Land And Bread, screening both in-person and online Saturday at 8 pm; Ehab Tarabieh’s documentary is assembled from the B’Tselem Camera Project, which gives Palestinian citizens in the West Bank the opportunity to document their lives under occupation. There’s also a festival within the festival: Weengushk International Film Festival: Indigenous Films At TPFF will screen a trio of documentaries – Tanya Talaga and Michelle Derosier’s Spirit To Soar, James Burns’s The Water Walker and Janna Kyllästinen’s Along The Winisk River – at the Lightbox and online Friday at 9 pm. And the festival still has a social component: the annual Sunday brunch has been expanded into the Sahtain Deluxe Block Party, outdoors at Lynx Music (260 Emerson) Sunday afternoon.

Through Sunday at TIFF Bell Lightbox and online at tpff.ca .

Every year around this time, Warner Home Entertainment rolls out a 4K upgrade of a Stanley Kubrick film; the 50th anniversary of his 1971 adaptation of Anthony Burgess’s dystopian satire was the obvious candidate. So here’s the return of A Clockwork Orange, just as sickeningly effective as it was half a century ago, envisioning a near-future England lousy with sociopathic young thugs – exemplified by Malcolm McDowell’s charismatic, dead-eyed Alex – and a government that devises a radical re-conditioning program to remake these monsters into polite, productive members of society. (True to Burgess’s text, it does not go well.)

McDowell’s performance remains a thing of perverse, sarcastic beauty, and Kubrick’s arch formalist vision traps him in bleak spaces filled with blank whites and primary colours that look incredible in Warner’s vivid Ultra High Definition transfer. The previous Blu-ray transfer was very good, but the added resolution and the kick of HDR’s wider colour range is revelatory, playing up the contrasts between the grubby textures of Alex’s world and the domestic spaces he and his Droogs delight in invading and desecrating. The film feels like it’s got its teeth back.

There are no new extras in this package, which is a little disappointing given the whole anniversary thing, but the suite of extras from the 40th anniversary Blu-ray release are all here: McDowell and Nick Redman’s conversational audio commentary  recorded for that release, and four featurettes (amounting to almost two hours) exploring the film’s production and legacy. I’m not sure what else there would be to add, honestly.