What to watch on Netflix Canada in September 2021

Including Sex Education, Love On The Spectrum season 2, Kate, Nailed It! season 6 and Chicago Party Aunt 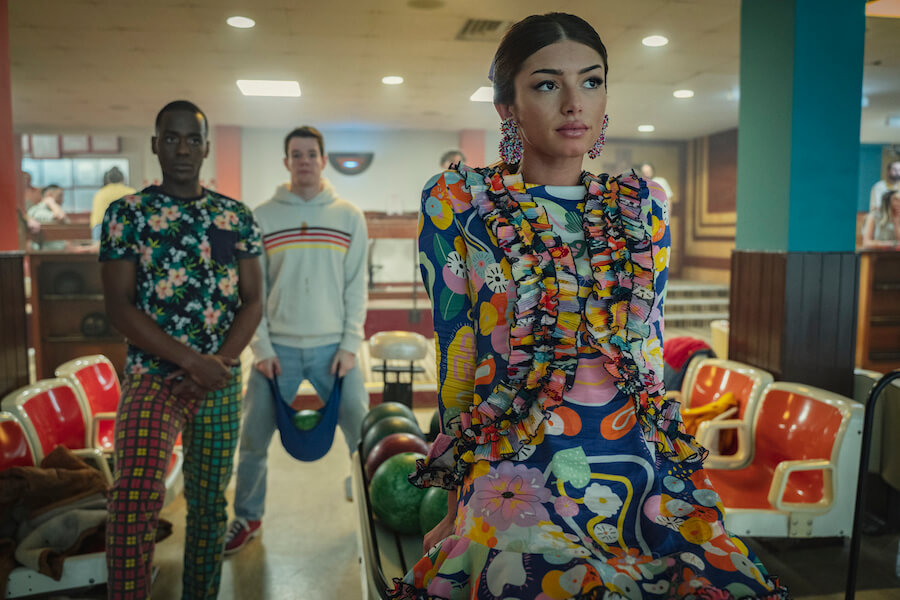 These are the most anticipated new titles hitting Netflix Canada in September 2021, including Sex Education season 3, an action movie starring Mary Elizabeth Winstead and new seasons of Nailed It!, Love On The Spectrum and The Circle.

Laurie Nunn’s eccentric, occasionally explicit comedy about British teens coping with the physical and emotional challenges of growing up (and getting busy) adds its first non-binary character this season (played by Sudanese-American actor/musician Dua Saleh). Girls’ Jemima Kirke joins the cast as Moordale’s new head teacher, who’s determined to get the school back on track after last year’s STI epidemic. Meanwhile, the established characters are figuring out their new normal: Otis (Asa Butterfield) and Maeve (Emma Mackey) are on the outs, Otis’s sex-therapist mum Jean (Gillian Anderson) is unexpectedly pregnant, and Eric (Ncuti Gatwa) and Adam (Connor Swindells) are trying to negotiate their very unlikely romance. In case you were worried, Aimee (Aimee Lou Wood) is still the nicest person in the world, and Lily (Tanya Reynolds) is still writing alien erotica. Some things are set in stone. September 17

There are a slew of documentaries and dramas rolling out to mark the 20th anniversary of 9/11, and this docudrama – starring Michael Keaton as Kenneth Feinberg, the attorney who ran the September 11th Victim Compensation Fund – looks to be one of the more sombre and unshowy. Stanley Tucci, Amy Ryan and Laura Benanti co-star; The Kindergarten Teacher’s Sara Colangelo directs, from a screenplay by Max Borenstein… who wrote it before he co-created Warner’s current Godzilla franchise and AMC’s horror series The Terror. So that’s intriguing. September 3

The bond between civil rights-era icons Malcolm X and Muhammad Ali was on screen recently in Regina King’s directorial debut One Night In Miami. That film, based on Kemp Powers’ play, imagined what went down on one pivotal celebratory night, before the two friends had a falling out over Islam. Using archival footage and interviews with family members, Blood Brothers, a documentary directed by Marcus A. Clarke, explores X and Ali’s mentor and pupil relationship as well as the rift that drove them apart. September 9

Love On The Spectrum (season 2)

Last summer’s Love On The Spectrum proved that not all reality dating shows are about shallow, traditionally attractive people claiming they’re looking for love when they’re really seeking to advance their acting careers and build their Instagram followings. The Australia-set series followed a dozen people on the autism spectrum as they explored the world of dating and relationships – some for the first time. The second season follows a bunch of new singles and catches up with some familiar folks from last year, including the frank and forthright Michael, as well as Chloe and Mark, who in the teaser trailer are seen going out on a couple of dates together. September 21

Gunpowder Milkshake. Jolt. The Protégé. “Murder lady murders a lot of people before they can murder her first, preferably in stylized circumstances” is its own genre, and that’s entirely fine. It’s fun to watch filmmakers rework the John Wick mechanics for their own purposes, and Mary Elizabeth Winstead – who played the ruthless, rage-fuelled Huntress in last year’s Birds Of Prey – is a great choice for one of these. The twist here is that, technically speaking, her murder lady has already been murdered, poisoned by a slow-acting toxin that’ll end her in 24 hours. Her mission: find the people who did it, and murder them right back. September 10

There are a lot of reality competition shows bouncing around the tubes – like, more than we could possibly count – but there’s only one where the endlessly optimistic Nicole Byer and a panel of experts and comedians assemble to celebrate the spectacle of people trying to create exquisite desserts, and failing spectacularly. Yes, it’s The Great British Baking Show if the point was to send the judges screaming out of the tent, but Byer’s enthusiasm makes it all feel very charming and good-natured. If you haven’t discovered the glories of this show, there are five whole seasons waiting for you right now. Dig in. September 15

Superstore scene-stealer Lauren Ash voices the title character of this animated series, playing a gleefully immature adult determined to coax her nerdy nephew out of his shell. That’s pretty much all we know about this one, except that Ash’s Superstore co-star Jon Barinholtz is one of the creators, along with Ash’s fellow Second City alums Katie Rich and Chris Witaske. And honestly? That’s enough to get us on board. September 17

If there were ever a reality show tailor made for a pandemic, it’s The Circle, in which a group of contestants are isolated in separate apartments and can only communicate with each other through a social media-style style app. They can create whatever identity they choose to show the others, with everyone rating each other. The winner receives $100,000. Weekly episodes from September 8

In previous seasons, outgoing comic Whitehall and his staid, stuffy dad have travelled together through Europe, Southeast Asia, Australia and the American west. Now, in their fifth and final travelogue, they travel around their own country, the UK, likely because of COVID-19 restrictions. Speaking of which, this should make excellent armchair travelling during the pandemic’s fourth wave. September 14.

Craig McCracken, creator of the wonderful animated series The Powerpuff Girls and Wander Over Yonder, delivers a second season of his goofy, scrappy show about a hyperactive little boy (voiced by Jack Fisher) who finds himself in possession of five alien power stones, and immediately hands them out to his friends (and a cat), creating the world’s least inspiring super-team. Season 1 found them eventually figuring out their respective skill sets and battling the alien warrior who wanted the stones for his own sinister purposes; we don’t know what McCracken has planned for the new episodes, but we’re excited to find out. September 7

Big rigs race down Manitoba’s ice roads in an enjoyably ludicrous chase movie that whittles the Fast And Furious formula down to its most elemental form. Liam Neeson and Laurence Fishburne star truck drivers who have to rely on tools and tricks of their trade to barrel down thawing ice roads to deliver a massive payload aiding the rescue of trapped miners. It’s the most hoser, Coffee Time-friendly action movie you can imagine and we’re here for it. September 22

Jeff Chan directs the hell out of this homegrown, crowdfunded sci-fi action flick about mutants living on the fringes in a drone state. Robbie Amell plays an electric-powered mutant who loses his job in construction, hooks up with a heist crew and butts heads with a superhuman criminal network. Think X-Men meets Den Of Thieves in a movie that pulls off what David Ayer’s Bright thought it was doing, but with way less money. September 13

The full list of new titles available on Netflix Canada in September 2021 by date:

Kid Cosmic (season 2)
Octonauts: Above & Beyond
On The Verge
Untold: Breaking Point

The Circle (season 3)
Into The Night (season 2)

A Storybots Space Adventure
Jack Whitehall: Travels With My Father (season 5)
The World’s Most Amazing Vacation Rentals (season 2)
You vs. Wild: Out Cold

Castle And Castle (season 2)
Nailed It! (season 6)
Saved By The Bell (season 3)
Too Hote To Handle Latino (new episodes weekly)

Afterlife Of The Party
Double Jeopardy
Dumber And Dumber To
Where’d You Go, Bernadette?

The Guide To The Perfect Family
JJ+E

The Wolf Of Wall Street

The Father Who Moves Mountains
The Stronghold

Confessions Of An Invisible Girl
The Ice Road
Intrusion
Monsters Inside: The 24 Faces Of Billy Milligan

Friendzone
No One Gets Out Alive
Sounds Like Love