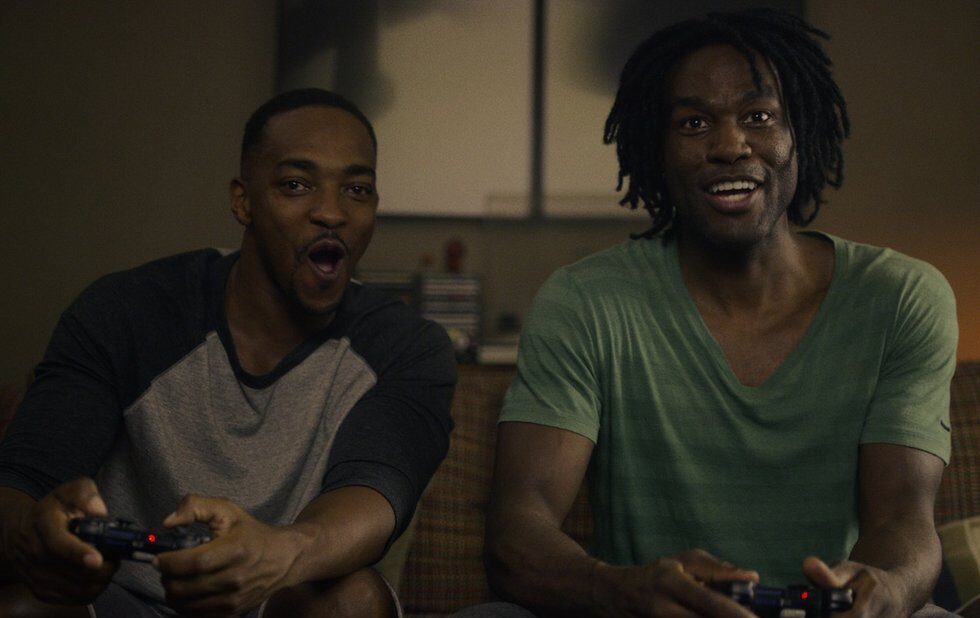 After four seasons and one gimmicky interactive feature last December, the dystopian Black Mirror is back for a constrained fifth season that finds writer/producer Charlie Brooker trying something radically different: optimism.

To varying degrees, the three hour-plus episodes of this new batch all spin stories in which new technology might not be the worst thing in the world for the people grappling with its overreach. Sometimes it even helps them understand one another better, or make unexpected connections.

Also it lets them play the most realistic knock-off of Mortal Kombat ever conceived.

The idea that wearing someone else’s skin gives these men permission to be more open and honest with one another than they’re able to be in the flesh is an intriguing one, and Brooker lets us see the ramifications of that decision play out in unexpected ways. Mackie’s character recedes from his wife (Sleepy Hollow’s Nicole Beharie), while Abdul-Mateen’s bachelor finds himself taking less and less pleasure in his hedonistic lifestyle.

We also get to see Klementieff (who co-starred with Mackie in the last couple of Avengers movies) and Lin (who co-starred with Abdul-Mateen in Aquaman) get to play a much wider range than they’re usually offered. And given how mechanically most Black Mirror episodes steer their stories into downbeat finales, this one finds a resolution that feels much more honest to the situation and the characters.

The second episode, Smithereens, is the most conventional of the season. It’s simple hostage drama about a driver (Andrew Scott) for an Uber-like ride-sharing service who abducts an employee (Damson Idris) of a Facebook-like social network, and makes only one demand of the police who’ve pulled him over: he wants to speak to the company’s Zuckerberg-like head (Topher Grace).

Cutting back and forth between the field outside London where Scott’s standoff is unfolding, the Los Angeles office where Smithereens executives work to figure out what’s going on and the desert retreat where Grace’s character has been for the last few days, it’s an efficient clockwork thriller that, once again, doesn’t fall back on ironic reversals or hacky twists to reach its cathartic ending. It doesn’t even have a sci-fi starting point all the tech is present-day stuff, and the biggest reveal is purely emotional. Scott’s riveting as the lead – between this and the new season of Fleabag, the guy’s having a hell of a year – but Idris and Grace get their moments as well. Capably directed by James Hawes, it’s gripping from start to finish.

Finally, there’s Rachel, Jack And Ashley Too, which is dramatically the wobbliest of the three. It’s also the one everyone will be talking about, since it’s got the most bizarre conceit – and I’m not talking about the bit where Miley Cyrus plays a bubblegum pop star who sings self-actualized rewrites of Nine Inch Nails songs.

Rachel and Jack are teenage sisters in a small California town who are barely coping with the loss of their mother: Jack (Madison Davenport) has retreated behind a punk affect, while the younger Rachel (Angourie Rice) has put all of her energy into worshiping Cyrus’s Ashley O, who’s just released a virtual version of herself – kind of like an Alexa Echo with a face – as part of her latest marketing campaign.

Rachel, who isn’t very good at making friends in the real world, is all too happy to bond with her very own Ashley Too… until something happens to the real Ashley, shifting all three of the title characters into a direction Netflix has demanded reviewers not reveal. (I would never dream of doing so also, you’d think I was hallucinating half of it.)

This episode, directed by Anne Sewitsky, feels the most Black Mirror-y, with chases and schemes and sci-fi devices. It’s also pretty enjoyable, with three solid lead performances – four, actually, given that Cyrus is playing a dual role – and a plot that keeps piling on twists and complications like it’s daring itself to run out of ideas.

But once again, the show doesn’t go for darkness. It flirts with it throughout, in Ashley O’s home life with her controlling aunt (an icy Susan Pourfar, of Scandal and Elementary) and in a moment about two-thirds of the way through the story that lands with the perfect symbiosis of comedy and horror that Brooker is always chasing.

And in the next beat, when Brooker walks back that moment because he really only wanted it for shock value, we’re reminded of how flimsy most of Black Mirror has been up until now. (Or at least I was, anyway.)

Still, if the worst thing you can say about Rachel, Jack And Ashley Too is that it’s not willing to really push itself into the uglier side of its premise, that’s still a net positive for this season. For a show that’s built its brand on nihilistic spirals, there’s something heartening in watching Black Mirror embrace the audacity of hope.

Will it last? Who knows. But this is a nice change.