Review: Not even Chloé Zhao can bring Marvel’s Eternals to life 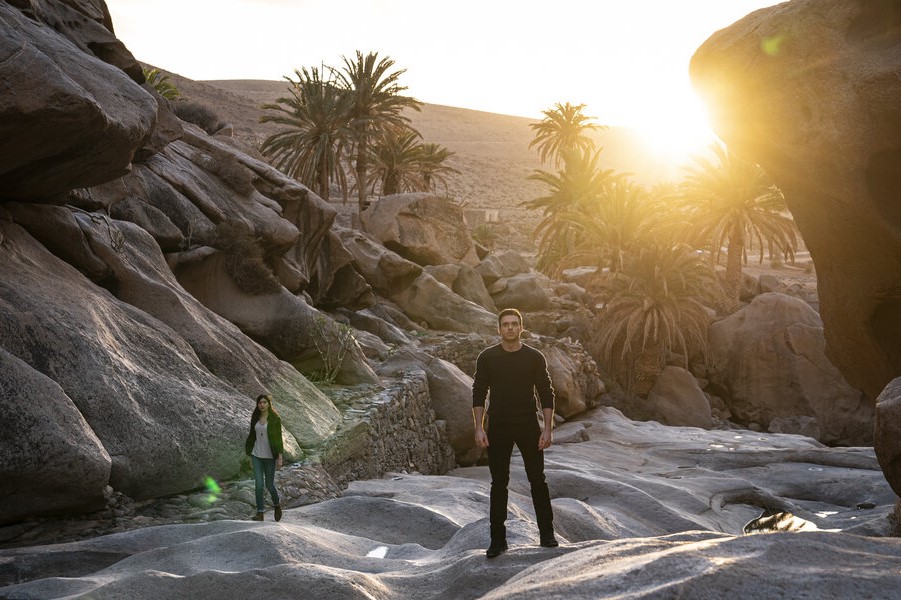 I feel I should start this review by stating the obvious: Eternals isn’t totally Chloé Zhao’s fault. It’s entirely possible that Marvel’s gonzo comics property cannot exist anywhere other than the panels of a Giant-Sized Marvel Treasury, where Jack Kirby’s elaborate universe of immortal near-gods battling ancient evil across the millennia could splash across as many oversized panels as its legendary comic creator could draw.

Scaled down to human size, their elaborate costumes replaced for the most part with comfortable street clothes, their grandiose speechifying ways swapped out for sulking about the state of their relationships or muted debates about the moral consequences of their actions, Kirby’s characters lose their dazzle. They’re just a squabbling super-family, and the Avengers movies already did that. (And the Black Widow movie did it again barely four months ago.)

Still, for good or ill, here’s a Marvel movie that wasn’t directed by committee. The Nomadland Oscar winner’s signature handheld shots of actors framed against natural vistas are all over this thing, even when those natural vistas are digitally generated. That’s the first aesthetic contradiction Zhao has to overcome when making a Marvel movie; it won’t be the last.

In addition to the challenge of making Kirby’s concepts fit into the established Marvel Cinematic Universe – where godlike characters not only have to debate why they sat out the whole Infinity Saga, but also take responsibility for Hiroshima – Eternals has to figure out a way to make sense of the story in the first place. Originally, Kirby’s Eternals (which were hastily reworked versions of the New Gods he created for DC a few years earlier, but let’s not get into that right now) were immortal heroes the Greeks used to create their gods.

Now, they’re a band of immortal warriors dispatched to earth by the grand celestial being Arishem – voiced in stentorian tones by David Kaye – around 5,000 BC to save humanity from the threat of the rampaging lizard monsters known as Deviants. Ajak (Salma Hayek) is their leader, gifted with empathy and the power to heal; Ikaris (Richard Madden) can fly and shoot lasers from his eyes.

Sersei (Gemma Chan) can transmute inanimate matter into whatever she wishes; Thena (Angelina Jolie) is a mighty warrior, able to conjure blades from thin air. Kingo (Kumail Nanjiani) can fire energy blasts from his fingertips; Gilgamesh (Don Lee) can punch things really hard. Phastos (Brian Tyree Henry) is a technopath; Sprite (Lia McHugh) can create illusions, while Makkari (Lauren Ridloff) is a speedster. And then there’s Druig (Barry Keoghan), who can control mortal minds but is constantly being told he shouldn’t.

The Eternals thought they’d defeated the Deviants a few centuries back, and split up to wander the world searching for new purpose. (Cersei’s a schoolteacher in London; Kingo got into movies.) But now the beasts are turning up again, their resurgence apparently connected to inexplicable earthquakes around the globe. Time to get the band back together.

We are now about 45 minutes into the movie, and it’s no fun at all. Zhao and her co-writers approach this as the creation myth of the Marvel project, despite the fact that the previous two dozen movies have always made sure to both humanize their characters and lighten the heaviness of their constant world-saving. (Even Thanos had a sense of humour.)

Eternals just isn’t interested in enjoying itself; it’s two and a half hours of sustained glumness as we watch the very talented cast stand around waiting for their motivation to arrive. Jolie, Chan, Hayek and Madden strike the requisite poses but never come to life. On the sidelines, Henry crowbars in some humanity as Phastos and Nanjiani provides brief comic relief as the vainglorious Kingo, who’s spent a century hiding in plain sight as Bollywood royalty. But the movie keeps coming back to Chan’s mopey Sersei and Madden’s perpetually clenched Ikaris, who just aren’t that interesting no matter how many times we’re told their on-again, off-again romance is one for the literal ages. I don’t blame the actors, who are entirely capable of being fun in things. Chan brought a fun, prickly energy to a different character in Captain Marvel, and Madden made a charismatic action hero in Bodyguard. Here, they’re just mired in the movie’s heaviness, like everyone else.

For every step forward – the colour-blind casting, the introduction of Deaf and queer characters, the franchise’s first sex scene – Eternals manages to get three or four other things disastrously wrong: clunky dialogue, elaborate flashbacks that expand the running time without advancing the story, sentient mannequin Kit Harington as Sersei’s mortal boyfriend Dane Whitman. The Deviants barely register as antagonists; even when one of them develops the ability to walk upright and deliver monologues, he feels like a faded copy of James Spader’s depressive take on Ultron.

As I said up top, Zhao isn’t entirely to blame for this; I don’t know that anyone could have wrestled an Earthbound Eternals onto the screen. It needs to harness the cosmic craziness of Kirby’s ambition, and all the meditative magic-hour cinematography in the world can’t make up for the absence of that wild spark.

Still, it’s shocking that the director of a film as nuanced and alive as Nomadland would deliver something as cold and inert as this. Or maybe it’s not surprising at all that a microbudget auteur would be crushed by the blockbuster machinery. Either way, it’s an unwatchable slog.