Finally the hero of her own story, Scarlett Johansson knits together a decade of Natasha Romanoff's inconsistent characterization in a satisfying action thriller 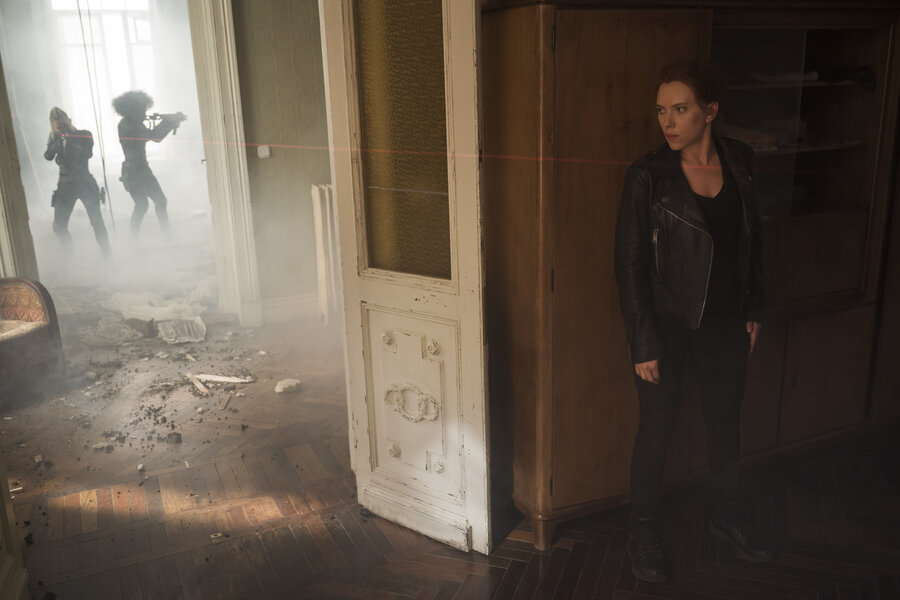 Natasha Romanoff (Scarlett Johansson) gets to fight her own battles in Marvel's Black Widow.

Yes, there’s some irony in Scarlett Johansson’s Marvel character only getting a solo movie after the events of Avengers: Endgame… but on the upside, Marvel movies have already established a willingness to jump around the timeline if it suits a given story. Black Widow is mostly set in 2016, just weeks after the events of Captain America: Civil War, meaning it runs parallel to the events of Black Panther; it also has a prologue set in 1995, the same year Captain Marvel takes place.

And ultimately, none of that matters because this is a properly self-contained story for the once and future Avenger, with Johansson’s Natasha Romanoff on the run after that big super-smackdown at the Berlin airport and back in her comfort zone as the outcast she’s always felt herself to be.

Natasha would be content to lay low for a bit, but events elsewhere in Europe have conspired to pull her back into a life she thought she’d left behind years earlier – and to reunite her with the family she was sure she’d escaped: a clan of Russian sleeper agents played by Florence Pugh, David Harbour and Rachel Weisz, all of whom are somehow tied to a decades-old plan to take over the world through mind control and international espionage.

And that’s Black Widow, written by Thor: Ragnarok’s Eric Pearson (from a story by WandaVision creator Jac Schaeffer and The Disappearance Of Eleanor Rigby writer/director Ned Benson) as an engaging mash-up of chases, close-quarters action and family road movie: imagine Little Miss Sunshine, if all of the characters in the minivan were Jason Bourne. It kinda changes the dynamic.

Cate Shortland, the Australian minimalist who made Somersault and Lore, uses the movie’s midsection to finally explore who Natasha is when she’s not fighting gods and monsters, letting Johansson knit together a decade of inconsistent characterization to give the Widow the emotional foundation she’s been missing. Pairing her with Pugh – who has the bratty-younger-sister vibe down pat as Yelena Belova – is a stroke of genius, giving even their action scenes a comic edge. (Imagine how much of a revelation Pugh’s performance would have been if this movie had arrived in April 2020 as originally planned, just months after the actor’s Oscar-nominated turn in Little Women.)

And even though the film’s third act falls victim to the now-cliched Marvel climax of escalating stakes and a giant thing falling from the sky, Shortland and her effects team thread that needle as well, with Natasha fighting for something very personal in the midst of all the fate-of-the-world stuff that doesn’t really matter.

Also refreshing? No romantic subplot, because neither Natasha nor the movie has any time for it. She’s there to fix this thing and move on. She’s a professional, and that clipped competence is a quality Johansson’s found in the character from the very first; in an odd way, it’s really nice to see her bring Natasha Romanoff full circle. If this really is the last time we see her, it’s a fine sendoff.