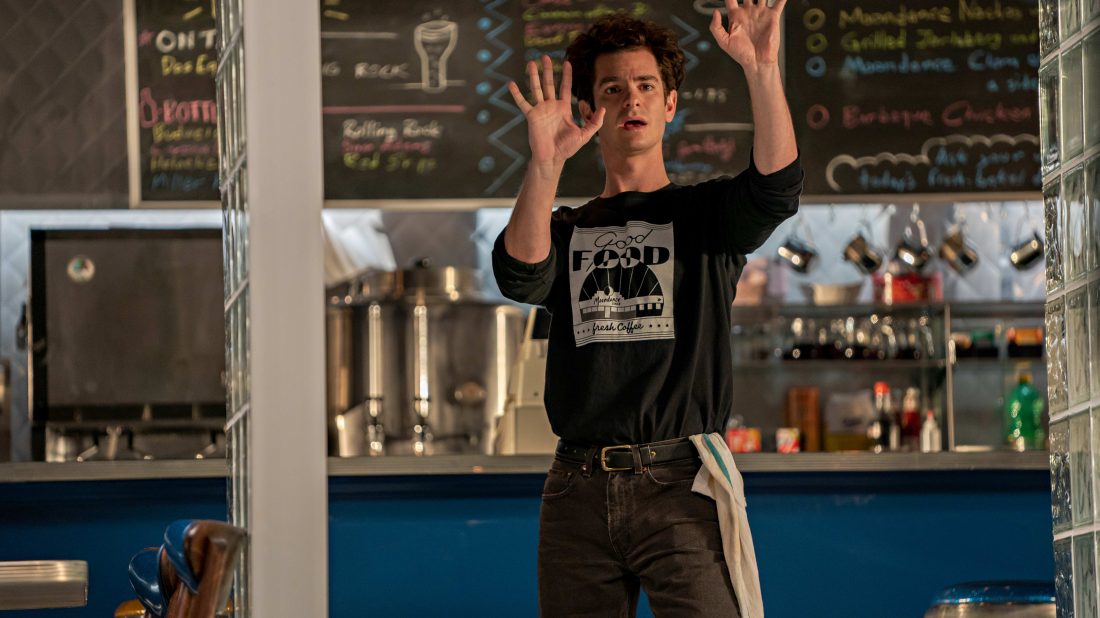 Larson conceived BOOM as a rock monologue, and he performed it with a band in 1990 at a well-received workshop. After Rent’s success, and Larson’s tragic death (he died days before Rent’s first performance), the show’s book and structure were tweaked for a cast of three and performed off-Broadway.

And now in a film version directed by Hamilton’s Lin-Manuel Miranda – a guy who knows a thing or two about developing hit musicals – it’s been rearranged once again to tell a meta story about a talented, struggling composer who would go on to write a landmark piece of theatre about love and friendship during the AIDS crisis.

Although not nearly as groundbreaking as Rent, tick, tick… BOOM! is entertaining enough, and first-time director Miranda has created something that, unlike another recent adaptation, actually works effectively on film. It’s part documentary, part musical and 100 per cent bursting with love for the art form.

Days from turning 30, Jonathan (Andrew Garfield) is obsessed with an upcoming workshop of a musical he’s worked on for years. His agent (Judith Light) won’t return his phone calls, so he attempts to invite the city’s musical elite – including his idol, Stephen Sondheim (Bradley Whitford in an uncanny impersonation). This could be his big break. He’s also procrastinating writing a crucial song for the show’s second act.

Meanwhile, he’s got some personal problems. His girlfriend Susan (Alexandra Shipp) has received a job offer to teach dance out of state and wants to know if he’ll join her. At the diner where he works on the weekend, an HIV-positive friend and co-worker has suddenly become sick. And since his best friend/ex-roommate Michael (Robin de Jesús), who left theatre to make money on Madison Avenue, has moved into a swanky new condo, he’s behind on the rent.

That’s a lot to juggle, but Miranda and screenwriter Steven Levenson (Dear Evan Hansen) have created a clear and effective way to present the story. Because many of Jonathan’s friends are in the theatre, it’s not out of place for them to break out into song at, say, a party, or even at the diner where, in the film’s funniest scene, a who’s who of Broadway perform Larson’s clever homage to one of the canon’s most sublime songs.

And, as with the film Cabaret, most of the film’s numbers take place onstage in the show’s workshopped musical, where Vanessa Hudgens’s Karessa and Joshua Henry’s Roger frequently represent Susan and Michael.

There’s a real fluidity to the film’s scenes, and great use of New York locations. While there are clear markers of the era – among them the Macintosh computer – Miranda doesn’t fetishize the period or its fashions. And he gets honest, lived-in performances by the actors. Jesús delivers a soulful, sensitive turn as Michael, while Shipp is sympathetic in an under-written role and Hudgens oozes charisma in her songs.

Garfield, lanky and over-caffeinated, his hair swept up into a curly mop like the real Larson, loses himself in the role of an artist trying to break out without breaking down. He performs his numbers with so much energy and chutzpah it looks like he’s been doing musical theatre for years.

While the film hits Netflix next week, I’d love to see it with a crowded theatre of musical lovers – especially for that diner scene. This is a film that was made by theatre lovers – and it shows.