This week's releases include Wildhood, Turning Red, The Adam Project and the reunion episode of Love Is Blind: Season 2 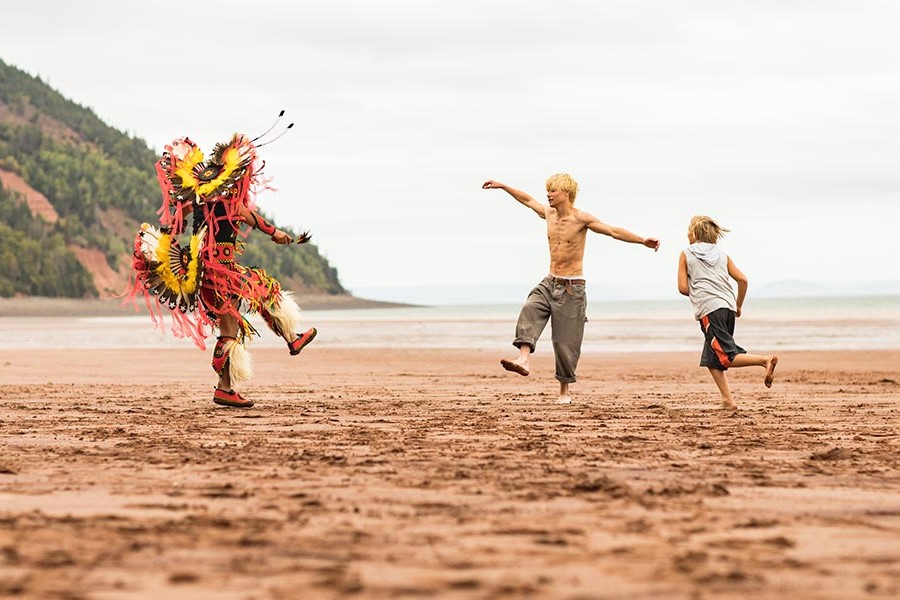 We totally slept on Wildhood when it premiered last TIFF. Hannam expands their award-winning short Wildfire into a blistering coming-of-age tale. There’s a scrappy energy and emotional depth here that we saw glimmers of in Andrew Cividino’s Sleeping Giant several years ago, but also a sense of urgency that was absent from the earlier film.

Phillip Lewitski stars as Lincoln, a Nova Scotia teen living with an abusive father, raised to believe his Mi’kmaq mother has passed. After a brutal run-in with the law and horrifying consequences at home, Lincoln runs off, learns his mother could still be alive and goes searching for her alongside a young half-sibling (Avery Winters-Anthony) and a Two-Spirit traveller named Pasmay (Joshua Odjick). The latter eases Lincoln into embracing his sexuality while planting seeds of doubt about whether any family could possibly be waiting to receive them.

The emotions are heavy and the sense of vulnerability unshakable in this open wound of a film about broken lineage, generational trauma and the yearning to find community, while also confronting homophobia within Indigenous communities. But Hannam handles all that without ever abandoning a sense of warmth and hopefulness. 99 min. Now playing at the TIFF Bell Lightbox. NNNN (Radheyan Simonpillai)

Deadpool star Ryan Reynolds retreats far from his famously vulgar antics in The Adam Project, an Amblin-wannabe fantasy adventure about a time-traveller teaming up with his younger self to save the future. It’s a welcome March Break distraction for kids but also a constant reminder of the infinitely better movies that came before it. The pitch meeting might have sounded something like, “E.T. crashes the DeLorean but with Ryan Reynolds.”

The movie gets by on the charisma of young star Walker Scobel, who plays 12-year-old Adam opposite Reynolds take on the same character. Finding a kid who can mimic and make Reynolds’s smart-aleck act endearing is a straight-up acting coup. Both stars work up a strong rapport in the early goings, as their character(s?) size each other up from across the space-time continuum, the younger wide-eyed with excitement that his older self is a pilot with muscles who holds the promise that there will be sex in the future.

The amusement gives way to a convoluted plot stuffed with mawkish sentiment, cliched standoffs and cheap CGI explosions. But not before Jennifer Garner has a moment to shine in a thankless role as Adam’s widowed mother, landing all the pathos neither Reynolds nor his mini-me have. 106 min. Now streaming on Netflix Canada. NNN (RS)

Second seasons of reality shows are always tricky, because the contestants have obviously seen the first season and have learned how to strategize for getting maximum screen time, audience sympathy and their 15 minutes of post-show social media fame. That explains why – in this experiment that asks whether people can fall in love, sight unseen – clearly mismatched couples like Shaina and Kyle and Mallory and Sal stayed together after they had seen each other, even though viewers could tell the women were just not into their guys. And it explains how Deepti turned down Shake at the altar without giving us any indication of what she was thinking in the nine episodes leading up to the finale.

Shake, who admitted to everyone that he wasn’t attracted to fiancée Deepti, became this season’s biggest villain, and it was earned. But I also felt sorry for him; in this reunion episode, he correctly calls out his fellow participants for being “real at the beginning and then fake as fuck” by the end. He did what Shaina and Mallory knew they couldn’t do and still maintain some sympathy. (My favourite moments in this episode are when Shaina narrows her eyes and tries to think how to make herself look less guilty.)

In the end, even though two couples found love and marriage, there was no heartwarming story comparable to last season’s Cameron and Lauren. The biggest revelation is that co-host Vanessa Lachey is a damn fine interviewer. She should be on call to helm future U.S. electoral debates. The entire 10-episode season and reunion are now streaming on Netflix. NNNN (Glenn Sumi)

Before Meilin – the semi-autobiographical tween doppelganger for filmmaker Shi – makes her magic transformation, she’s in her bedroom, shamefully taking cover, working through a flurry of hormonal emotions. Her hands frenetically search for how to release that energy and so she proceeds to draw steamy illustrations of herself with a young hipster Daisy Mart clerk in a hilariously frantic and moist sequence. It’s one of many moments, alongside scenes of Meilin defiantly twerking and gyrating to express her sexual energy, that Shi proudly gets away with.

Because this is fairly uncharted territory for big corporate kids fare, there’s a risk to categorizing Turning Red as a “magic puberty” movie, as if it doesn’t have all the sentiment, pathos and family values we saw in Inside Out and Coco. Shi, the first solo female feature director at Pixar who already scored an Oscar for her short film Bao, deftly navigates big emotions in small exchanges, while honouring a story that will be intimately familiar to anyone who grew up with heavy-handed immigrant parents. 99 min. Now streaming on Disney+. NNNNN (RS)

Available on VOD this week

culture Streaming What To Stream