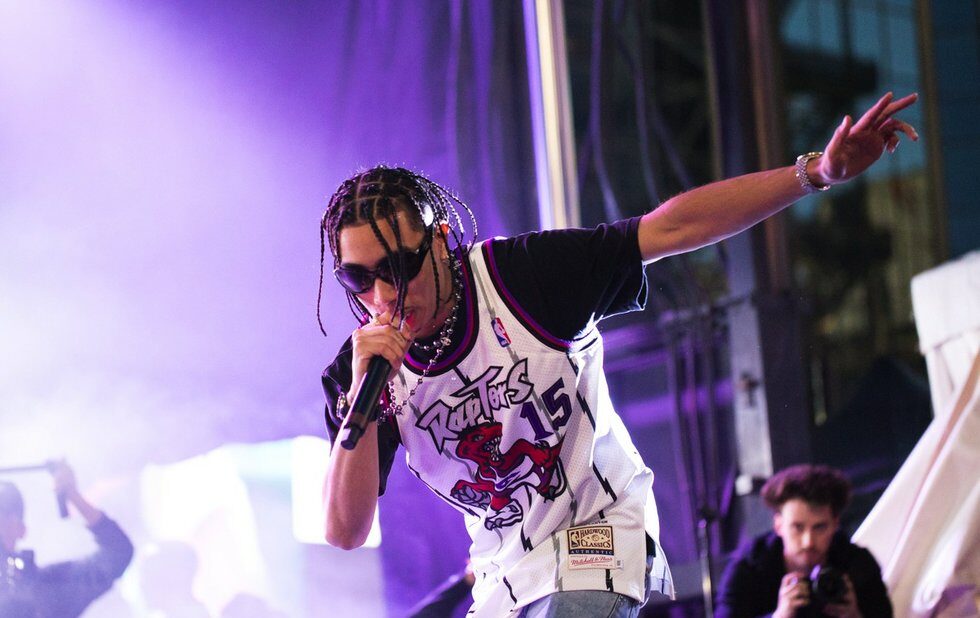 Less than 12 hours after the Toronto Raptors’ NBA championship win turned Yonge-Dundas Square into a packed-to-the-brim pit of hoots, hollers, spilled beer and drunken chaos, NXNE somehow cleaned everything up and put up two stages in time for its centrepiece Festival Village event.

Like last year, when it returned to the square after a two-year stint at the Port Lands, the festival eschewed the already-built stage in the square (instead using it as the sparsely attended VIP section) and erected its own right on Yonge looking east. Watching Ontario duo Cleopatrick playing a set of radio-friendly rock music there Friday evening so soon after the victory celebration just added to the uncanny feeling that it almost wasn’t real.

Yonge was closed from Dundas to Queen and occupied with a handful of sponsor activations – free flavoured water, rolling papers and rock and roll wine – along with a flea market, gaming station, beer garden and a poorly publicized and often empty comedy tent. The stretch gave NXNE more of a holistic festival vibe, even if it felt disconnected from the Club Land series.

There was a new second stage at the foot of Yonge near Queen, just in front of the Elgin and Winter Garden Theatre looking north. The first band to play it was Hot Garbage, and the everyone-in-sunglasses Toronto psych band’s wash of shoegazey guitar and droning synths provided a dazed soundtrack for downtown strollers, many of them sporting freshly bought Raptors championship hats and shirts. One fan took a selfie with a foam finger with the band as her backdrop.

Greys lead singer/guitarist Shehzaad Jiwani played with the surrealism of the setting and the moment with deadpan dedications to the Shopper’s Drug Mart up the street and sending a thank you to Dundas West Fest. Like Hot Garbage, the local band surely caught some passers-by attention with the volume of their songs, which are not as tightly wound as they once were but still know how to pay off tension with a mighty racket. With their mix of melody and noise, it felt like a vintage episode of the Wedge exploded all over Yonge Street. RICHARD TRAPUNSKI 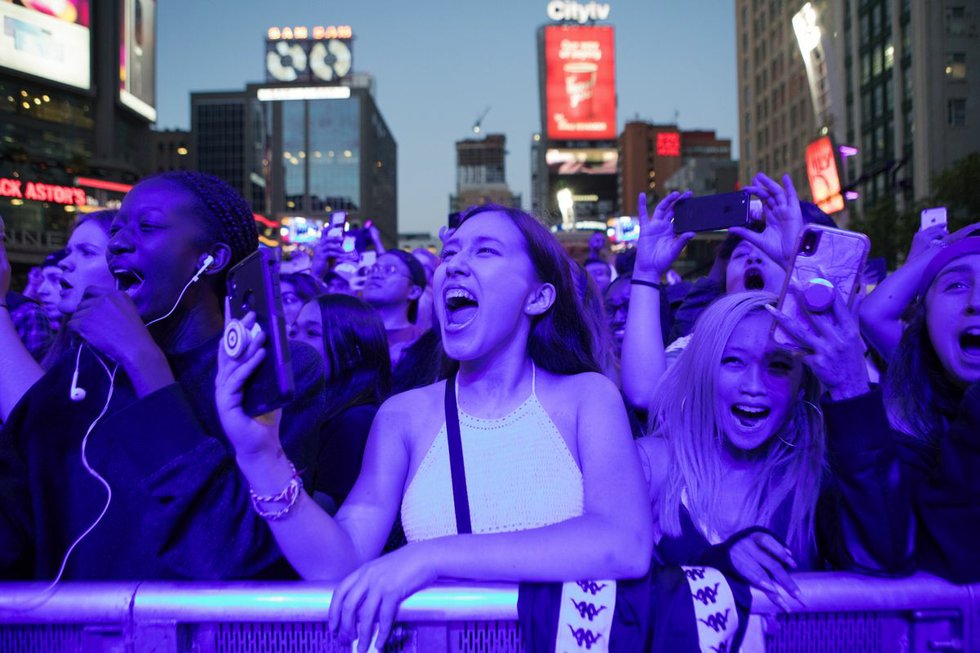 The crowd at Yonge-Dundas Square

Taking the stage to Queen’s Bohemian Rhapsody, dressed in all black and vintage Iron Maiden and Lil Wayne tees, Haisla Nation hip-hop duo Snotty Nose Rez Kids treated their 6 pm slot on the Yonge-Dundas Square mainstage like a headlining performance, playing material from their critically acclaimed latest album Trapline. The chemistry between MCs Young D and Yung Trybez was apparent and they made full use of the main stage. Backed by a DJ, the duo’s bass-heavy trap beats got the crowd bobbing and dancing and they frequently took turns delivering verses a cappella.

Besides playing fan favourites like Lost Tribe, Crazy and Creator Made An Animal, they took a moment to acknowledge mothers everywhere before revisiting their prior Queen singalong, then launching into Son Of A Matriarch. While Trapline is stacked with guests including Kimmortal, Tanya Tagaq and the Sorority (whose Haviah Mighty was coincidentally playing down the street at the same time – one of many shows she played at NXNE), the duo proved that they’re more than capable of commanding an audience by themselves and no doubt won over at least a handful of curious passers-by.

Slightly less successful at inspiring crowd participation was balaclava-clad Brooklyn rapper Leikeli47, who played next on the same stage, though it wasn’t for a lack of trying. Sticking mostly to songs off her excellent 2018 album Acrylic, she shuffled and two-stepped with gleeful abandon, bringing out a trio of dancers for the bouncy highlight Money.

Even though she didn’t gather the same crowd as headliner Santigold later that night, she proved to be a solid part of the festival.  MAX MERTENS 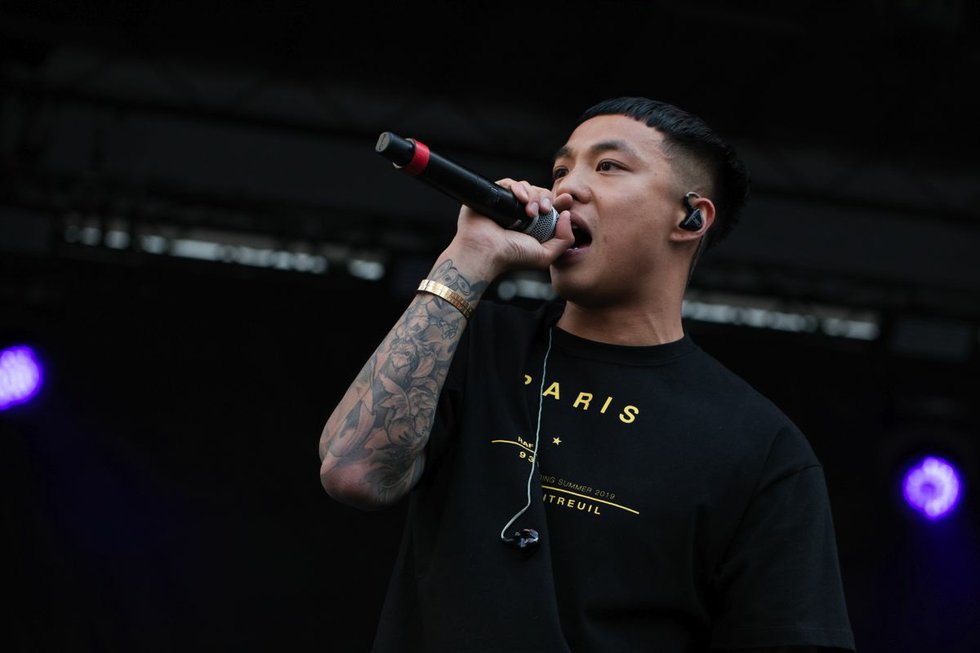 The city’s energy was still sky high by the final day of NXNE, and the all-local lineup of mostly hip-hop performers were happy to capitalize on it. (They were lucky the NBA Finals didn’t go to game 7, which would have coincided with the final night of performers at Yonge-Dundas Square).

While Just John x Dom Dias played their turn-up anthem Soundboi on the Queen stage and thanked the Raptors (“the best fucking basketball team in the world right now,” said John to big cheers) for using the song in the official We The North campaign, fans at the mainstage pushed to the front to catch a glimpse of Uptown Boy Band. Group members Justin Trash, Joe Rascal and Roc Lee, along with a crew that grew to envelop much of the stage, delivered a high-octane performance that combined punk energy and anti-K-pop-star charisma. For their underground hit Noraebang, they encouraged everyone to jump to the song’s pulsating synth rhythm.

Over on the Queen stage, rapper and R&B crooner Notifi performed his single Wave to a crowd of fans and curious shoppers that stretched up Yonge. Aided by lush atmospheric production from SupahMario (Drake, Migos, Travis Scott) the song follows a familiar brooding hip-hop R&B hybrid sound forged by Drake and the Weeknd. But Notifi brought his own individuality on the hook, singing with conviction and making it clear that he’s ready to forge his own lane in Toronto’s rich R&B soundscape.

The alt-R&B sounds continued when Anders took the mainstage. Clad in a utilitarian black t-shirt, sneakers and jeans, he looked ready to tear up the stage as he launched into a performance of Bad Habits and With Or Without. But midway through the performance, his mic cracked – filling Yonge-Dundas Square with ear ringing white noise. He pressed on. “This shit is going down with or without you now,” he spat, making it clear he wouldn’t let technical problems stand in the way.

On the heels of his new album Light Path 8, Killy closed the festival with menacing melodies and speaker-blaring ad libs. Emerging on stage in a Martian-like getup, complete with oversized sunglasses and a white puffer coat painted in cartoon Dalmatians, he instantly captivated a jam-packed Yonge-Dundas Square with his presence.

When he slid the jacket off to reveal a vintage Vince Carter Raptors jersey, the crowd went wild. “Let’s make some noise for the fucking Raptors!” he yelled.

Fans sprayed sparkling wine into the air as the shimmering synths and piano keys of No Romance and No Sad No Bad consumed them.

Dealing with a cracking microphone and speaker issues of his own, Killy persevered. “This is legendary shit, rock star shit,” he yelled as the crowd raised their hands above their heads to sway to the rhythm of Killamonjaro.

He jumped off stage to grab the hands of fans who had waited for hours to see him, ending the night, and the festival, on a high. CLAUDIA MCNEILLY