The California rapper donned alter-ego regalia to perform his most mature, choreographed and biggest Toronto concert to date at Scotiabank Arena 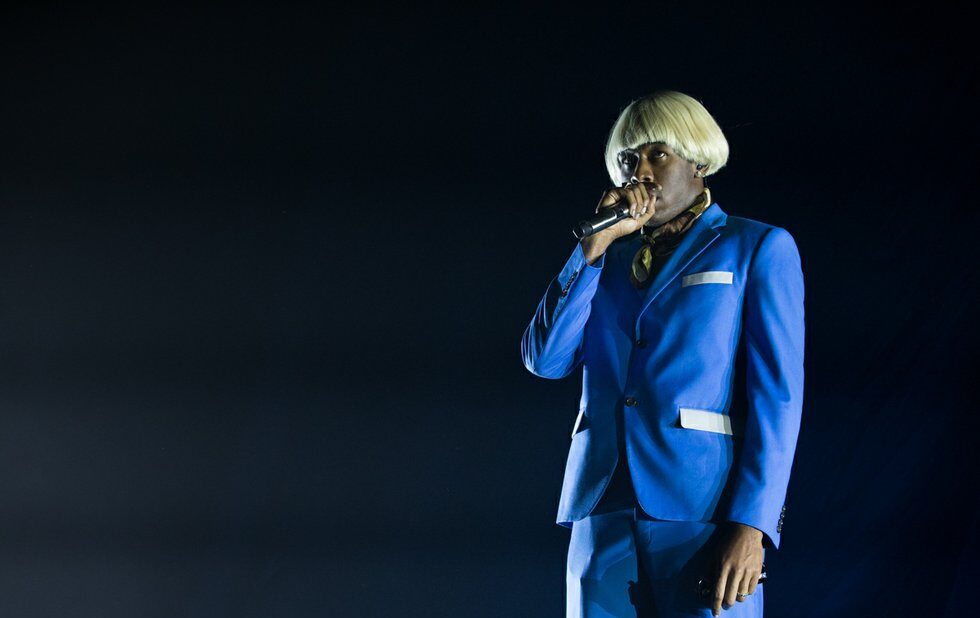 A lot of artists make music about falling out of love. But there are some emotions that are so ineffable that even music might seem like an inadequate expression. Fortunately, when such circumstances arise there is another outlet an artist can turn to: wearing a wig.

With his fifth solo album Igor, multi-hypenate California musician and rapper Tyler, The Creator became the latest artist to represent a collection of songs with a character. His Igor sports a blond bowl cut, colourful suits and is a solemn and silent type, but prone to wild bursts of movement.

The advent of Igor happened to coincide with the once frustratingly cynical and aggro MC’s ascension to arena-act status. But unlike many pop stars who upsize through templated pandering, Tyler has grown more plaintive, vulnerable and sonically adventurous. On 2017’s Flower Boy and this year’s Igor, he has played up his more classically soulful and jazzy influences while dispensing with standard song structures in favour of unpredictable dynamics.

Igor is a narrative album about falling in and out of love, so it makes sense that the accompanying tour is high concept, with minimalistic staging and precise deployments of brightly colourful lighting. After appearing to roars and chants in full Igor regalia in front of a glittery curtain, Tyler spent two hours performing his most mature, polished and choreographed Toronto concert to date.

“It’s crazy that this happened by just staying weird,” he said at one point in the set, surveying the full-looking house in Scotiabank Arena’s 300 level. “I appreciate it.”

But after his entrance, he remained frozen at centre stage as the buzzy bass synths of Igor’s Theme gave way to the shuffling drums of I Think. The audience sang loudly to the “I think I’m falling in love” refrain while forming mosh circles and bopping around in anticipation of going nuts when a beat kicked in.

They would repeat this pattern throughout the set, mirroring Tyler’s own stage moves. He’d pace around or remain still and then lapse into wild dancing that seemed both freeform but also practiced – like when he dropped down on the floor backward and then impressively propelled himself forward upright onto his feet again. 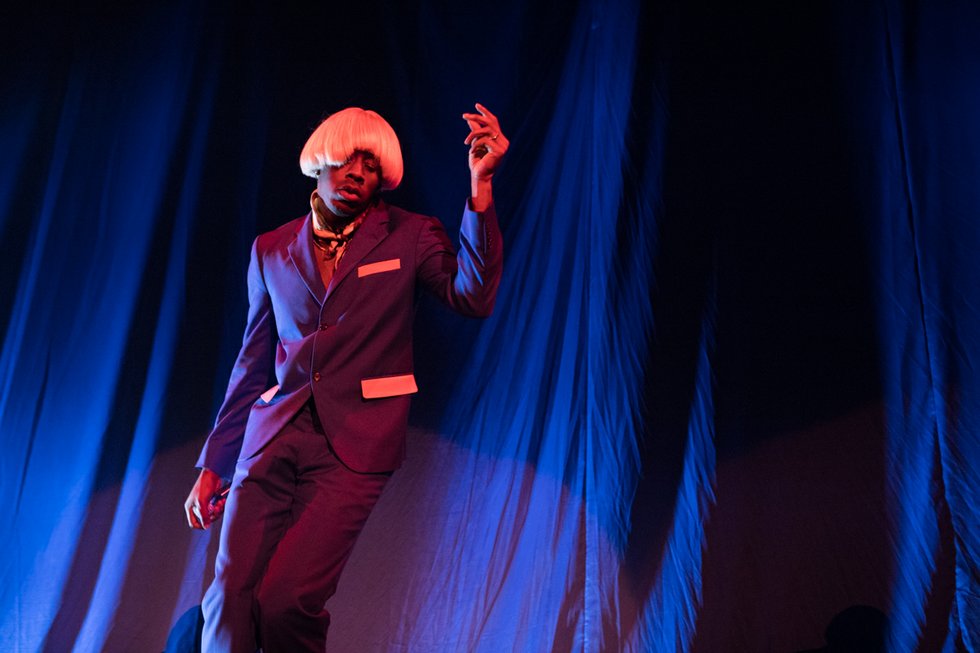 The set list was comprised of poppy and sing-songy Igor songs, a dip into Flower Boy (911, Who Dat Boy, Boredom) and his usual live staples of Yonkers, She and IFHY, which he performed while dancing wildly atop a small raised platform as the audience filled in for Pharrell Williams on the silky-smooth chorus: “I’m in looooooooove.”

Tyler doesn’t have a dynamic singing voice, but he was adept at using his instantly recognizable guttural register effectively when it came time to sing heartfelt Igor and Flower Boy songs that are full of vocal effects in the studio versions. He didn’t seem to use any effects, and sang and rapped with clarity – and without the aid of added vocal tracks.

The only instrument onstage was a white piano on an old-school, revue-style riser, though it largely remained unplayed. Many of his pre-recorded tracks leaned into the nostalgic vibe, such as Puppet, which began with schmaltzy keys. A pink spotlight accentuated the lounge crooner effect before he upended it completely by unleashing a ferociously heart-racing flow.

He intro’d Igor’s big hit, Earfquake, by sitting at the piano to play a windy melody that gradually became recognizable and inspired a full-on sing-a-long that he ended with a showy glissando. When the album version came on, the energy in the arena jumped even higher.

It was a rare moment where he extended a track to allow his extremely engaged audience help evolve it spontaneously. The other such moment was the sweetly romantic See You Again near the set’s end, which morphed into a call and response. As his live musicianship expands, it would be great to have more roomy arrangements, especially since his fans seem to know every last word, melody, backing vocal and subtle vocal inflection. 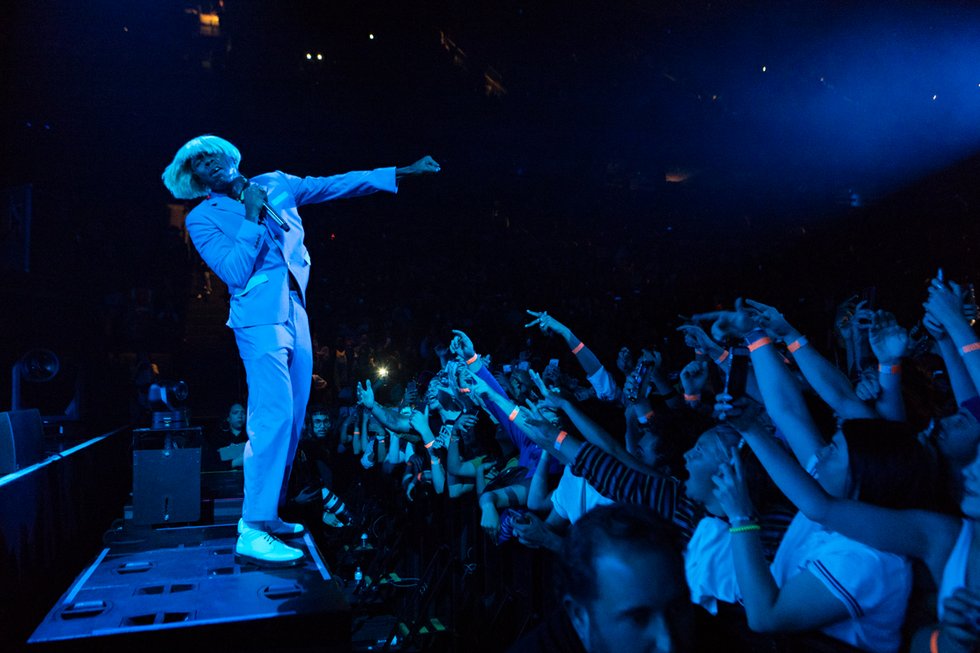 Even when rapping or singing to pre-recorded tracks, Tyler has become a master of restraint-and-release tension, using build-ups to create huge explosive energy (which he amplified with rhythm-synched pyrotechnic display during Who Dat Boy) without sacrificing the emotional content of his lyrics.

So many rappers (and pop stars) rely on bangers to keep the energy at a one-note high level and then seem unable to just allow a lull in the crowd to pass without asking “Are you still with me?” Tyler has enough confidence to know when the silence is due to engagement and not waning interest.

Opener and Tyler’s self-proclaimed “boyfriend” Jaden Smith had a similar confidence, which is not surprising given he’s the son of Hollywood power couple Will Smith and Jada Pinkett Smith. Most of his set fell into the realm of on-trend trap-influenced R&B/rap, and the audience pogo’d along enthusiastically. He fitfully sang more romantic numbers, making up for his unpracticed vocals – often swallowed by loud bass anyway – with effortless charisma. A music video accompanied each song, turning his set into a kind of retrospective for his prolific number of candy-acid hair and fashion looks.

GoldLink, who was on first, was the more skillful MC of the two openers. He bookended his short set with his hit Crew to big response. The sparse early crowd reacted more to the more classically bass-y songs of his recent Diaspora album like Cokewhite and Rumble than they did to the housey tracks like Zulu Screams that are increasingly reflective of his sonically expansive repertoire. 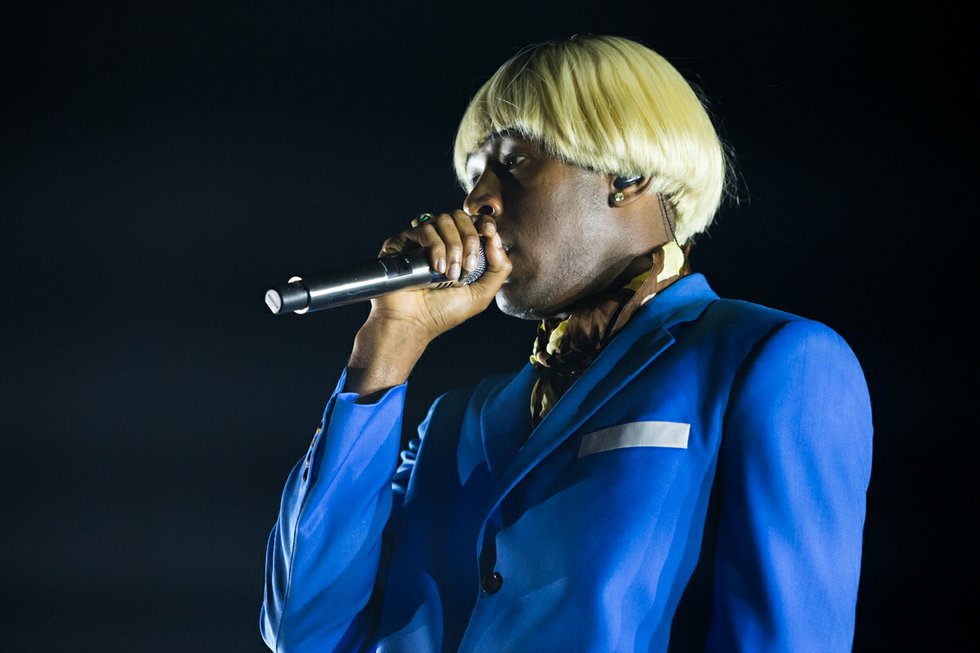