What’s with all the concert ticket scams on Facebook?

Open up practically any concert’s Facebook event page discussion tab and you’ll see a variation on this:

“I bought four tickets before I realized we had other plans that day. Help me out! I don’t want to get stuck with them. Message me if interested.”

They don’t exist. Not the tickets. And not the people.

Those people who forget they had other plans that day, a girlfriend in a coma, last-minute business trip out of town, or any number of reasons they can’t use the four tickets they’re offering, only to disappear once you’ve transferred them money on PayPal? They are fake accounts run by scammers who copy and paste the same message to sold-out shows in multiple cities, hoping to bait a few desperate concert-goers. It’s the Nigerian Prince email for music fans, and it’s getting worse.

All of a sudden, those ticket re-sellers hanging outside venues seem like the nice guys. At least they actually have tickets. Those croaky cries of “Who’s buying? Who’s selling?” outside every Toronto venue now sound almost quaint.

Noel Peters of Inertia Entertainment, an independent promoter who’s been booking metal and rock shows in Toronto for more than 24 years, says he first noticed the scammers about a year ago. He created and pinned his own post on Inertia’s Facebook page warning buyers to beware, started monitoring and deleting suspicious posts on his event pages, and closed up the discussion tab to public posts in an effort to reduce the fake sellers. Unfortunately, the volume of scammers has only intensified.

“It’s gotten horrendously worse over the past year,” Peters explains. “At first, you were talking three, maybe five, posts. My recent show with Lacuna Coil, I didn’t look at the page for 24 hours and woke up to 60 scam posts.

“I don’t want people to get ripped off because I care about the fans and also I’m the one that they come to, like it’s my fault for not cleaning them up fast enough. I do try to stay on top of this but I’m one person and I don’t live online 24/7.”

It’s not uncommon to see dozens of posts on one Facebook event page that all seem dubious.

For one example, I contacted several people posting tickets for sale to Angel Olsen’s November 16 show at Queen Elizabeth Theatre, which are going for $60 to $180 USD on resale site StubHub. They all got back to me within minutes, all asking for a payment via PayPal. “Renee Tomazini” offered me a ticket for 25 Euros, seemingly unaware that the concert is in Canada. “I’m currently in the United States for surgery that’s why I cannot attend event.” This person then asked me to do some sketchy bank transfer for a friend. Their account – and all four of the others I contacted – has since been removed by Facebook.

Granted, in the realm of Facebook-related scams it’s not exactly election-hacking, but it’s still fraud. Unsurprisingly, the social network offers no protection or recourse for fleeced music fans. And promoters can hardly stop using the service: Peters admits more than 50 per cent of his ticket sales come directly from Facebook event pages.

It’s no surprise that promoters are keen to use Facebook even more, potentially exclusively. Eventbrite boasts that its Facebook Ticketing integration, where users can purchase concert tickets without ever leaving the event page, generates 20 per cent more sales. (In exchange, Eventbrite captures your Facebook profile data, not to mention preventing you from being “distracted” by the world outside of Facebook.)

Problem is, making the concert-ticket-buying experience a closed loop on Facebook just encourages people to rely on its bubble, and thus more likely to fall for a scam post rather than seek out more authorized resellers off the site. Given that Facebook itself is unlikely to police any this, I do wish more promoters would take greater responsibility. Surely big players like Live Nation can afford to pay a community manager to police their event pages and remove obvious scammers? Smaller indies could follow Inertia’s suit and warn their followers about potential scams and at least try to report these repeat offenders?

In the meantime, some fans have taken it upon themselves to call out obvious scammers in the comments. Bless them. But in the rush to score that sought-after ticket to a favourite band’s sold-out gig, especially for smaller venues where tickets don’t show up on more authorized resell sites, some people just don’t think things through. 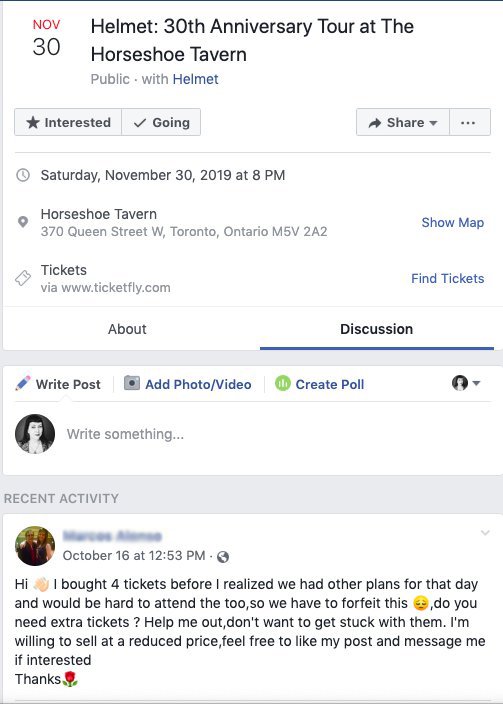 How to get the tickets without getting scammed:

• Read the comments. If you see a ticket for sale on a Facebook event page, look around to see if that person has been called out already in the thread. They may have already scammed someone.

• Check the seller’s FB profile. Is their page pretty much blank, or recently created? Probably a fake account. Ignore. If they live in Toronto, and agree to meet in person for the exchange, go for it! Everyone else, proceed with caution.

• Don’t send money without seeing the ticket first. A real seller can show you a screengrab of the ticket, ideally with their name on it.

• Only send money via PayPal’s “goods and services” feature and pay by credit card – which allows you to reverse charges for goods not received. Sellers insisting you use “friends and family” instead know that PayPal does not offer buyer protection for that and you’ll be screwed.

• Report suspicious accounts to Facebook. The behemoth won’t actually reply to your complaint or charge the scammer, but you may get some satisfaction from seeing their profile disappear.

• Take your chances outside the show. You never know who’s buying, who’s selling.