An American begs Canada for mercy

The decision to flee wasn’t made lightly. It’s not easy to cross the border, and I spent months readying my documentation so I could apply for a passport, all the while wondering whether the effort was worth the trouble. The straw that broke the ca-mel’s back fell during a ride on a Seattle city bus just a few days before the vote, when a Trump supporter in a blue baseball cap and a white mustache smelling like he’d been drinking stale beer out of used ashtray, started lecturing a young boy on politics.

I couldn’t help but overhear some of the more lush fragments of the old man’s incoherent rage, shouting the word “Vagina!” before inspiring the boy’s father to offer some friendly advice. “Sir! I think it would be best if you kept those thoughts to yourself!”

The old man responded with more insanity until his rambling references to female genitalia caught the attention of the bus driver. She stopped the bus, opened the doors and insisted the old man get off. He refused. I reached into my pocket and switched off the safety on a vial of pepper spray, then noticed a little Black boy standing next to me, terrified, pulling up the front of his jacket for a place to hide.

“Just get off the bus!” screamed the driver. “I ain’t goin’ nowhere!” slurred the old man. My options were bad versus worse: pepper spray in a confined space would definitely get the old man, but it’d also get the young boy, his father and the driver. So I did the only thing that made sense. I got off the bus, walked to my bank and changed as much money as I could into Cana-dian currency. I left the old man in the hands of the driver, and the U.S. election in the hands of the people. 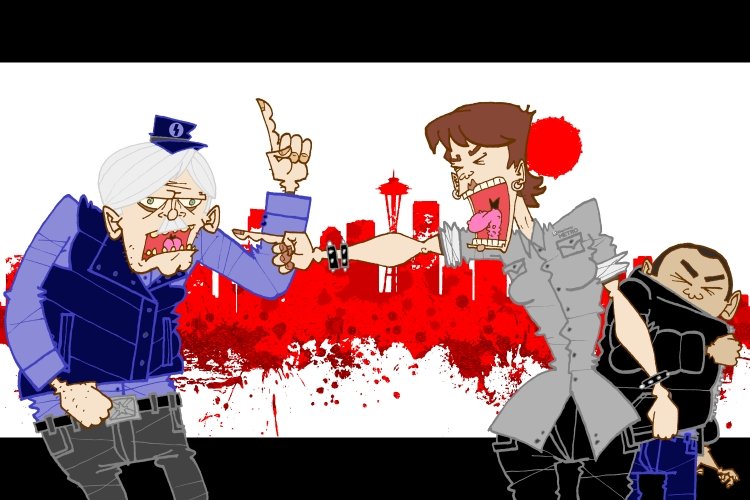 I arrived in Vancouver 24 hours later. The grey-clouded landscape between Washington and BC is identical, but the cultural differences north of the border are crystal clear. The Canadian flag, the Maple Leaf or the word “Canada” is displayed everywhere.

By comparison, the Stars & Stripes is rarely seen in Seattle. It’s obligatory to fly the flag outside public schools and other tax-funded buildings, but in the largest American cities (where people live with neighbours of every ethnicity, orientation and religious background), the ol’ red white and blue has fallen out of favour. At best it stands for life outside the cities, where ethnic and cultural diversity aren’t as prevalent, and at worst it stands for the heartland stereotype – the gun-toting Bible-thumper with a beer in one hand and a flaming cross in the other.

To put it bluntly, the face of America is no longer shielded from the sun by a cowboy hat, and many U.S. citizens would rather burn the American flag than salute it, because the flag represents the old, and Americans want something new.

But Canadians take pride in their national symbols, and my first stop in Vancouver is in the proudest neighbourhood of them all, at a Blenz Coffee on Denman, just eight blocks from Davie Street.

I’m there to meet a proud Canadian named Brian Calvert, who in 2012 became the face of the Canada Party, officially nominating Canada for the office of U.S. president. “We worked it out one time,” he says, referring to himself and his American-born conspirator, Chris Cannon.

“Every Canadian citizen would occupy the Oval Office for about seven seconds. Chris and I would always be there, but only as facilitators.”

Cannon is co-author of the Canada Party’s manifesto – America, But Better – and can be seen in the organization’s videos satirizing American confusion over gay marriage, climate change and gun control.  I could barley see him at Blenz – his wife had given birth about 48 hours earlier, and Cannon had been staying awake consuming coffee by the barrel. Between the obscene amounts of caffeine and the adrenaline rush of discussing politics, Cannon was vibrating back and fourth like the plucked string of a guitar.

I ask him about Canada’s interest in election 2016. “Outside of policy,” he says, “there’s this underlying Cana-dian psychosis about where the U.S goes, because Canada always seems to be like the U.S. 10 years ago. You had George Bush come to power, then a few years later we had Stephen Harper. Then you had Obama and we got Trudeau.” 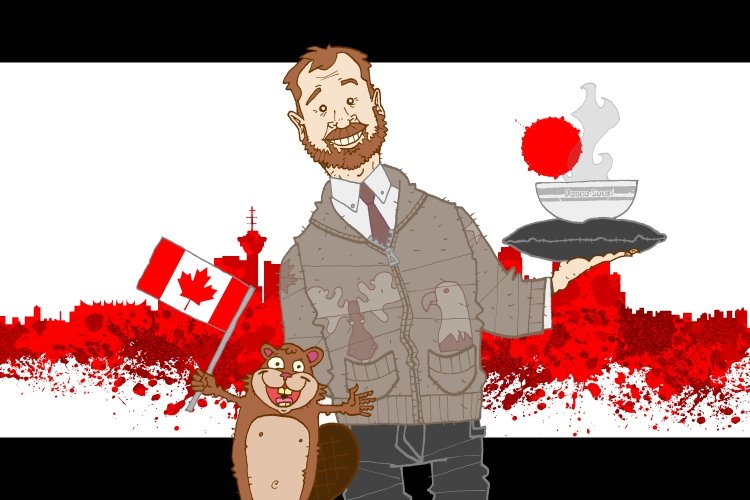 Calvert and Cannon invite me to an election night party at the Rio Theatre, and by the time the doors have opened the future was lost. Trump has taken Ohio (the bellwether state) as well as the key swing states of Florida, Pennsylvania and Iowa.

The theatre’s CEO, wearing a pant-suit, and actor/comedian Jacques Lalonde, dressed as Trump, are turning the fate of a nation into entertainment for the hundreds of costumed Canadians who’ve packed in to watch the election on the big screen (the same screen that a week before had shown Idiocracy).

The Canadians are sombre. Trump is the enemy, and Clinton is the enemy’s enemy, but the electoral votes keep pouring in, and for the first time since my arrival I feel ashamed. I’d prepared for a Trump victory but never imagined it would actually happen. The crowd has no idea who I am or what country I’m from, so they can’t understand what it feels like when they start shouting, “Make America greed again!” or “Life is a reality show!”

When the Rio’s house manager jokes that Canada needs to build its own wall, I felt the need to blend in, and coincidentally notice another symbol of Canada’s pride, a plastic poppy lying on the floor.

It’s not Remembrance Day yet, but people have been wearing their pins all week, a tradition unobserved in the States, so it took me a while to figure out what the poppy meant. “It’s to remember the fallen,” said the first Canadian I asked, and those words echoed in my head as I picked up the symbol and pinned it to my jacket, considering those who would fall in the next four years, those out of line with Trump’s version of greatness.

Next morning, I walk into the Immigrant Services Society of BC.

Fran asks why I want to become a Canadian citizen. I’ve been working on that answer for a long time. “I have no idea what’s real any more.” I say. “I come from a country run by politicians no one likes, who are reported on by news media no one trusts. I don’t know where to look for truth. As an American, I live each day in frustration and confusion. I’d like to go just one day without having to worry about tomorrow. I’d like to feel safe for a change, and to live my life without fear.”

Fran explains that I’d have to hire a lawyer to defend my claim to hope, and LSS provides financial aid only to people who are very short of funds. I have too much money to be considered for financial aid, so I return to the States with my tail between my legs.

I return to a city pockmarked by protests and to a country crossing the line of violence, where only the threat of violence had existed before. I may have been denied the opportunity to abandon ship, but I can still beg Canada to throw out a lifeline. Canada can no longer follow America’s lead. You need to lead by example, since Americans face only darkness ahead.

Help us. Help us dissolve the divide between right and left, between minority and majority, between one person and the next. Because the race for the presidency is over, but the human race can’t afford to pay for America’s decline. Remember the fallen, and have mercy on us as we fall, for it is to you from failing hands that we throw the torch.

Since 2014 Benjamin Taggart has written and illustrated under the name Poster Bot for Seattle-based magazine the Monarch Review.