NOW MagazineNewsCanada Election 2019: It’s down to the wire 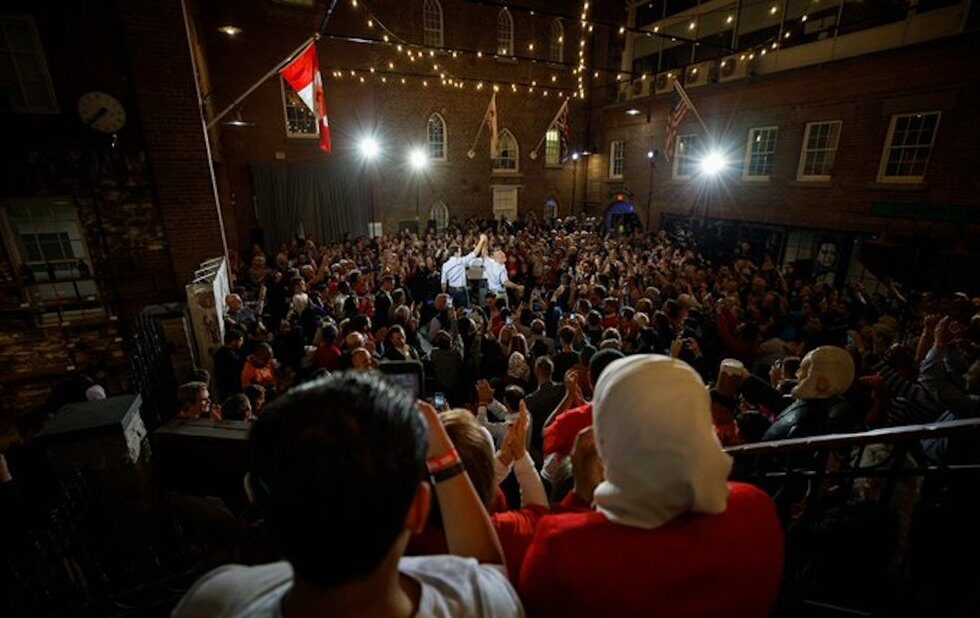 This election is nothing short of a major moment in world history. I am talking to you, dear climate concerned sisters, brothers, parents, neighbours and friends. Voting matters.

It’s not easy to resist the demoralizing voter suppression fostered by context-free “gotcha” election coverage and hyper-partisan politics that are currently the norm. But just do it.

If you are a Liberal, NDPer or Green, get out there and vote. High voter turnout could be a phenomenal game-changer. But it’s time to lay aside orthodoxy. Our idealism has been used against us for decades. We need to get very realistic right now. Efficient voting can kick Conservative ass and right Canada’s course in this crazy world of ours.

The Conservative Party under Andrew Scheer is throwing every trick in the book at us. We all know that job one is to defeat them. They are part of a highly resourced global movement dedicated to killing climate action and to keep rolling in the petrol profits that are killing Mother Earth.

To call them Conservatives is actually a tragic misnomer – they are right-wing radicals.

Guess what Stephen Harper is doing these days? He’s chair of the International Democratic Union, an “international alliance” of 60 countries dedicated to getting right-wing governments like theirs’ elected across the world.

This international cabal has been successful at stalling climate action for the last four decades, at least.

How do we get off this treadmill when the opposition is divided into three camps?

Every election, we progressives remain prey to manipulative political narratives that often push us to behave in collectively self-defeating ways. Once again, the conundrum about who to vote for is very real. It has become more than obvious that smart voting is essential. It is easy to find out what’s happening in your backyard. Go to 338canada.com and play with the tabs to find out about your specific riding.

There are less than 20 ridings where there is realistically a three-party race. In more than 90 per cent of ridings, the race is between two parties. If the Conservatives are one of those top two, just vote for the other top party. In a two-way race that doesn’t include the Cons, vote your heart. In a three-way, do your best and count on your friends to do the rest. But there is more to do, of course.

In this state of climate emergency, we need to shake up the whole political rewards calculus. It is time to measure and value political cooperation, more highly than partisan combat between the three climate-facing parties.

We need to start judging the Liberals, NDP and Greens by how willing they are to work together instead of how cleverly they pick each other apart.

Each of the three progressive party leaders is disappointing and imperfect in their own way. But they also are generally well-intentioned, climate positive and have important perspectives to add. Their platforms actually speak more to what they have in common than what makes them opponents.

Take a look around the world, my friends. From that perspective, Justin Trudeau, Jagmeet Singh and Elizabeth May are an unusually impressive crew. What we need is for these party leaders to be frenemies, not enemies. They actually need each other more than they realize, though for different reasons.

I know. For many of the partisans in each party it is radical to say this, but the existential climate threat demands that we become relational, not confrontational.

To meet the well-honed mayhem sown by the radical right, the Liberals need to form alliances with the NDP and Greens whether they are a majority or minority government. Otherwise, the sniping from both sides will kill any progress.

Likewise, if the NDP and the Greens are sincere about affecting transformational change, they will need the support of the Liberals. It could be a “win, win, win” if we citizens demonstrate that we approve and will reward this type of new collaboration. We need all three parties powerfully in the mix of the next parliament, but we have to be careful.

Let’s review the recent past. When Canada’s centre-left party collapses, political power lands in the hands of Conservatives like Stephen Harper and Doug Ford.

Fairy tales of a Singh win on October 21 have to make way for reality. We live in a democracy, which is a good thing. But the NDP will not get the votes needed to form a government. The only real alternative to a Scheer government is a Trudeau government, which is looking more like a minority. Either way, we absolutely need Trudeau to be our next prime minister.

Where does that leave the NDP and Greens? They are the critical engines pushing the centre to the transformative outcomes we need to see. Remember Medicare?

It is harsh but also true to say that Scheer is hoping for NDP support to soar as much as Dippers are. It is heartening to see Singh polling at traditional NDP percentages. But let’s not go overboard. Voting NDP in seats where the contest is clearly between the Liberals and Conservatives will be a bonanza for Scheer. In this case, forget about our dreams. A Conservative minority absolutely weakens the forces demanding climate action. We can’t let that happen.

We voters have been manipulated to think that we should choose our political affiliations the way we might choose a spiritual path. Am I a believer? Does identifying with the party speak to who I am as a person? Does it offer me a comfy sense of belonging and righteousness?

This stuff is gold to our vulnerable psyches. We are humans and, therefore, we are likely to project our unconscious tropes onto everything, including our electoral choices. So we get hooked into projection politics.

That’s a big reason why so many of us can be harnessed to vote against our own best interests. Sometimes the ideal is the enemy of the real. That is where we are now.

Of course, we need to feed our souls, I agree. But screw self-righteousness. We need to be outcome-focused.

In a democracy, it is ridiculous to look for a party that can fully realize us and represent who we are. The whole idea of a political party is to capture broad public interest. We need to be looking at the big picture if we hope to move the needle on the future of our planet.

The downside risk of getting a very unlikely majority Liberal government is going to be far less damaging than getting a minority Scheer government.

Regardless of the minority/majority situation, it is still very much in Trudeau’s long-term interests to bring the NDP and Greens into government decision-making. That is the only way he can protect himself from the harsh reality of attacks from both left and right that will just keep grinding his political capital down to nothing.

A climate emergency demands a new political culture that invites allies to be part of the solution.

I remember the election when the Liberals and the NDP were fighting each other about which was better: carbon tax or cap and trade. That got us nowhere.

Of course, the Liberals need to learn this lesson. And so does the NDP.

Don’t get me wrong. I am not throwing shade on my friends on the traditional left. We have had to be on the attack to pull apart a system that is sick and broken. But now that this powerful overwhelming systemic madness has come so close to breaking down the planet, we need to learn a new skill – how to pull together.

I have to hand it to Elizabeth May. She is all in when it comes to political cooperation. She has been pointing the way to this new paradigm for a long time. And good for Singh to have begun speaking of cooperation last weekend. He knows climate-concerned voters are doing the math. Let’s hope he has the heart to carry through with the promise of co-operation regardless of the outcome of Monday’s election.

Singh and Trudeau could accomplish collaboration readily if their own parties and the mainstream media wouldn’t tear them to shreds for doing so.

Just like Greta Thunberg says, it is time for the adults (and if you are voting age, you are one of us) to get to work. To turn this ship around, we need to crush the voter turnout and remake the country’s political culture. It isn’t easy or comfortable. But it’s possibly our only hope.