It was one Giambroglio after another

Adam Giambrone's sex life shouldn't lose him the race. He could have done that on his own. 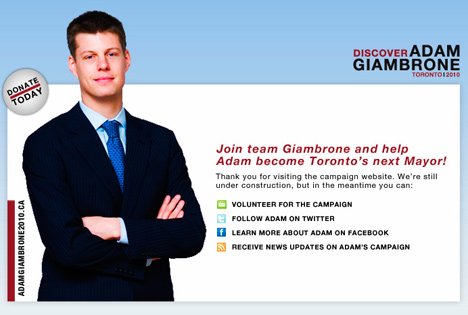 I keep trying to figure out why I, an interested voter and involved citizen, am supposed to give a flying fuck about who Adam Giambrone has been giving flying fucks.

Look, I’m aware the mayoral race is so far both our most weird yet most boring. I’m not hardened to the plight of reporters required to dream up news stories about a raft of supernaturally uninteresting candidates.

But, while the papers seem to think they’re underlining how Giambrone hasn’t been taking monogamy seriously – as if I care – all I’m seeing is how they haven’t been taking the race seriously. Reading the coverage, I think back to multiple articles on George Smitherman’s condo, and realize we’ve been getting more details about candidates’ partners than candidates’ platforms.

So I’d very much like to believe, if only for the sake of all our sex lives, there’s some other motivation here.

Some have expressed satisfaction over the exposure of a powerful man’s treatment of women. But from the start I’ve taken it as read that this is no feminist kerfuffle.

Otherwise no one would dredge the wronged woman’s relationship up to the front pages. No reporter would be agog over how Giambrone used his girlfriend as a prop – “an actress dressed as a political wife,” says the Post – as if a woman (especially one who works in higher political circles than her beaux) could never have agency over her own public persona.

Nary an inch would have been given to react quotes on the insanity of sending sexy text messages, as if it’s inconceivable that young women who sleep with politicians could turn out to be anything but backstabbing harridans. And we never, ever would have been subjected to the phrases “spicy little Toronto socialite” or “sex kitten” in ostensibly serious news articles written by serious journalists.

Anyway, if there were such noble intentions behind the outrage, we’d already have seen similar pressure applied to Rob Ford to step down a dozen times. Sexism? Racism? Homophobia? Take your pick. Take advantage of our combo specials. The man is a stupidity kitchen, and should have been shuttered by the mental health department long ago.

So then maybe, I surmise, this provided a municipal press corps listing rightward an invaluable opportunity to scupper the lefty and Miller’s spiritual successor – before anyone had a chance to ask whether he was really either.

But I’m likely over-thinking, and probably to defend against the obvious explanation: it sells papers to puritans. Ours is a town built on a shallow substrate of puritanism, and a great swath of its citizens still inexplicably waddle around with, to paraphrase Scott Thompson, that big British pickle up the ass.

I am officially indifferent about whom any given politician sleeps with (assuming they’re consenting adults). He was asking us to vote for him, not marry him. And every single one of us has been, at least once, a supreme asshole in a relationship. It hasn’t made us unable to do our jobs, and I’ll wager none of us felt the need to apologize to four million people (no one gets around that much).

If you can run a city, you just might get to be Mayor. That’s how it works. I don’t care if Giambrone and McGuinty would have gone steady, I care if they could have managed OMB reform. No one asks potential priests their thoughts on mixed-use zoning no one should care who’s been getting the Giambone. Neither Miller nor Pitfield had to show off their finishing swirl to vie for the job by the same token, Giambrone’s sex life shouldn’t lose him the race. He could have done that on his own.

This is a slippery slope. What other personal failings might become relevant? Being estranged from your parents? Dating that girl both you and your geeky friend promised you wouldn’t date back in high school? Not giving your kids sugar? Giving them too much sugar? Lying to dogs? People are, on the whole, confused train wrecks. By walking out the door each morning we have already implicitly accepted this.

What about people who actually practice, as consenting, informed adults, non-monogamy? What perfectly ethical but unconvential flavours of relating might, once exposed, invoke the ire of uptight voters if the door between the personal and political is left ajar?

This isn’t about Adam Giambrone, this is about the level of public discourse.

Sure, someone’s partner has the right to demand better. But that’s her business. We, on the other hand, have an obligation to demand more grown-up coverage of the race for Mayor. I don’t know or care what Giambrone did to who, but I do know that so long as we expect the press to just narrate a soap opera, we will continually be the ones getting fucked.[rssbreak]

More of Mike Smith’s writing can be found online at linebreaks.com